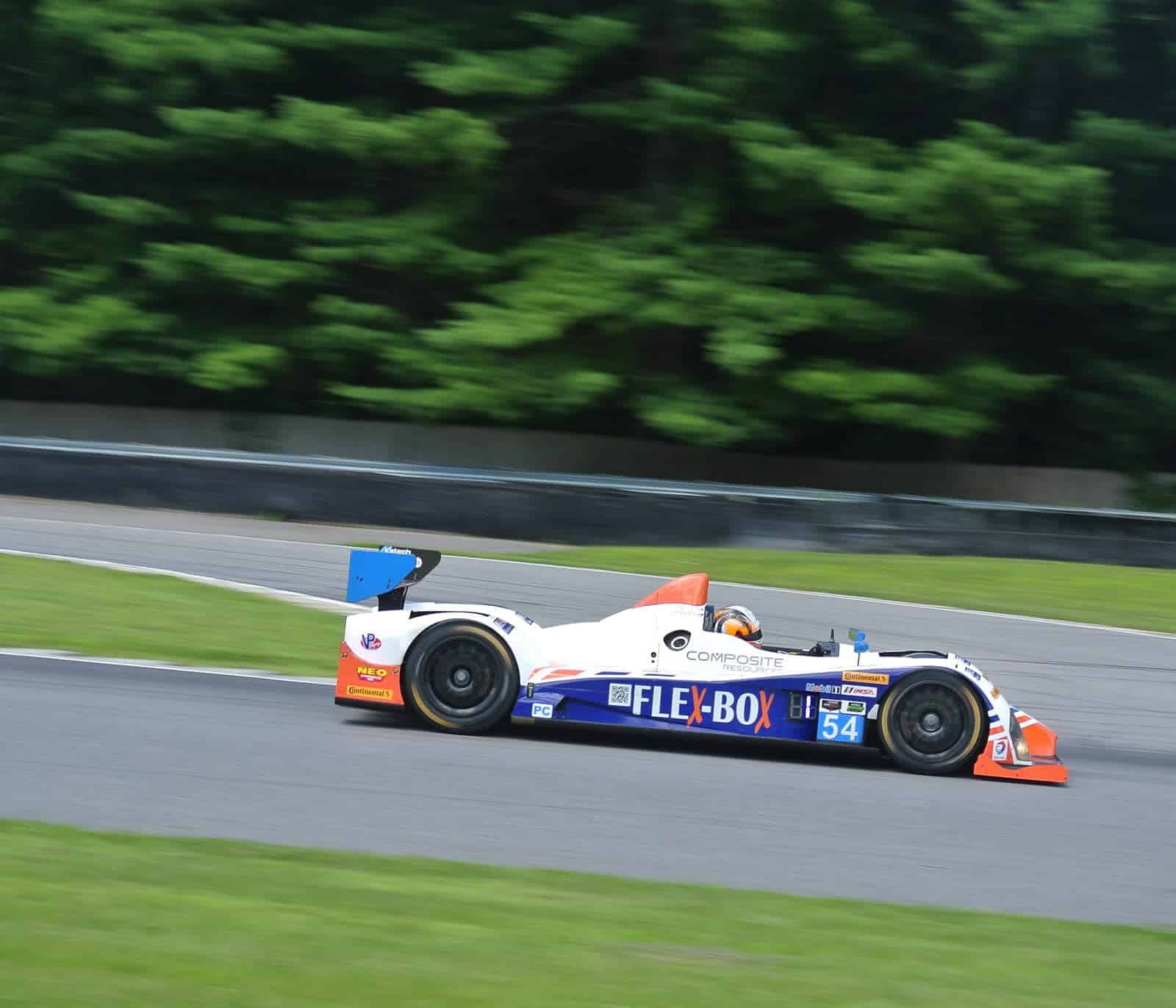 Saturday afternoon brought the TUDOR United SportsCar Championship’s Prototype Challenge (PC) and GT-Daytona (GTD) classes to the 1.474-mile layout at Lime Rock Park for two hours and 40 minutes of racing. The first part of the race saw one team dominate each class. Neither of those teams would be anywhere near the hunt for the win late. PC saw an established winner get back to Victory Lane, while GTD had a team overcome significant adversity over the weekend to get the win.

Stephen Simpson won the overall pole Friday evening for JDC/Miller MotorSports and started the race by running off and hiding from the rest of the field. By lap 6, Simpson had a 5.5-second lead on Performance Tech Motorsports’ James French in second. As the leaders began getting into the GTD field, Simpson only continued to expand the advantage. By lap 35 (26 minutes into the race), the lead was 27 seconds, over half a lap.

Simpson got the lead as high as 44 seconds (under green, a normal lap time for a PC car was anywhere from the mid-49s to the low 52-bracket) and lapped everyone but French before making his stop at the 55-minute mark. French took the lead as a result of the stop, but gave it back when he pitted and Conor Daly took over the No. 38.

Everything was looking great for Simpson until the car quit in turn 2 just a few minutes after regaining the lead, which brought out the first full-course caution. The car simply would not turn over. A tow back to the paddock and a quick fix allowed Simpson to continue, but he lost five laps in the process.

Daly gained the lead as a result of Simpson’s issues, but had Renger van der Zande all over him trying to get one of his two laps back after incurring a penalty in the pits. Van der Zande was able to get pass Daly and GTD leader Christopher Haase in the Paul Miller Racing Audi R8 LMS going down the hill into turn 7. Daly attempted to follow van der Zande past, but was clipped in the left rear corner. The contact took both cars off the track and into the tire barriers hard. It was the end of the day for both Daly and Haase, who both walked away disappointed, but unhurt. Despite the race being over for them, a sizable crowd gathered to watch the Paul Miller Racing team work on their R8.

The crowd gathered outside the @paulmilleracing work area as crews work on the No. 48 Audi. pic.twitter.com/kGu838oytD

After the race, Kimber-Smith was glad to take the win at his adopted home track.

“Since moving to America two years ago, this is the closest I can get to a home track,” Kimber-Smith said after the race.  “The team did a fantastic job, all weekend. Mike [Guasch]’s opening stint was fantastic, it kept us in the hunt. Especially the strategy that the JDC car was playing with the Gold driver starting, and we saw Colin Braun was finishing so we knew it was going to be a tough day. But we took the victory for us and we’re looking forward to the next one. It’s been a bit of unfortunate bad luck in the shorter races and we needed this victory today.”

In GTD, Dion von Moltke led from the pole in the No. 48 Audi. Giving chase early on was the Riley Motorsports No. 33 SRT Viper GT3-R and Patrick Lindsey in the No. 73 Park Place Motorsports Porsche 911 GT America. Lindsey tried multiple times to get by Keating, including a nice crossover move that Keating successfully defended. Eventually, Lindsey got past and put the pressure on Von Moltke. Ultimately Von Moltke kept the lead up until the stops began.

Once the stops ended, Von Moltke’s teammate Haase assumed the lead, then crashed out of the race in the aforementioned crash with PC leader Daly.  The crash gave Keating’s co-driver Jeroen Bleekemolen the GTD lead. However, some strategy occurred at this point. Michael Marsal brought the No. 97 BMW Z4 for Turner Motorsport into the pits for their one and only pit stop of the race for tires, fuel and a driver change (Dane Cameron, normally of Action Express Racing in the Prototype class, returned to the team just for Lime Rock). The goal from there was to run the second half of the race without a stop to the finish.

Just to even be in position to sneak a win was quite the story. On Friday, Marsal spun in turn 7 and backed hard into the tire barriers, bending the frame on the Z4. The team took the car on a rollback to a local body shop to use their frame straightener and make repairs to allow the rear wing to be mounted correctly. The car returned to the track at 8:40 p.m. Friday, then additional repairs continued well into the night in the paddock.

Bleekemolen held onto the lead until he was forced to stop for fuel and tires. When that happened, Cameron took the lead and had a 20-second advantage over the Viper GT3-R. Cameron was marginal to make it to the finish and slowed up his pace. Over the last half-hour of the race, Cameron’s lead withered away as he tried to save fuel and make the finish.

In the last couple of laps, Bleekemolen closed the lead down under five seconds. However, Cameron was able to make the fuel hold out to take the victory in his first race back with Turner Motorsport. For Marsal, it is his first career TUSC victory.

After the race, Marsal described the work that went into getting the Z4 back on track following Friday’s crash.

“What a weekend. This is my home track, the first time I ever drove a racecar [was] here. First time I ever won a race [was] here,” Marsal said during his press conference. “Yesterday, wound up in the wall for the first time here. It was tough, I think the back-right side of the car was an inch shorter. We didn’t think it would get fixed. It was busted up pretty bad. When you have everyone, your mom and dad, everyone you love, and this is Turners home track, it’s tough. They worked all night working on the car, literally.”

Cameron described the conservation that allowed them to be the only team that did the distance on only one pit stop.

“We were running [fuel] mappings that we had never really run to see what it could save,” Cameron said. “I was also trying to try and lift the pedal as much as I could. It was completely different than Mosport where I was flat out and as fast as I needed to go. We just focused on the pace I needed to run and the laps I needed to run. We got a bit of a gap, so I could focus on the numbers that I needed, and save fuel to where the guys in the stand were happy. It was making me pretty uncomfortable, but luckily we had saved enough during the first part of the stint to go as long as we did here at Lime Rock.”

Bleekemolen and teammate Ben Keating survived early contact with the Starworks Motorsport PC entry (and the off-course excursion that followed) to finish 3.5 seconds behind Cameron in second. The TRG-Aston Martin Racing No. 007 of Kuno Wittmer and Christina Nielsen was third, while the Alex Job Racing/Team Seattle entry of Ian James and Mario Farnbacher was fourth.

The next race for the TUDOR United SportsCar Championship will be the Continental Tire Road Race Showcase at Road America on Aug. 9.