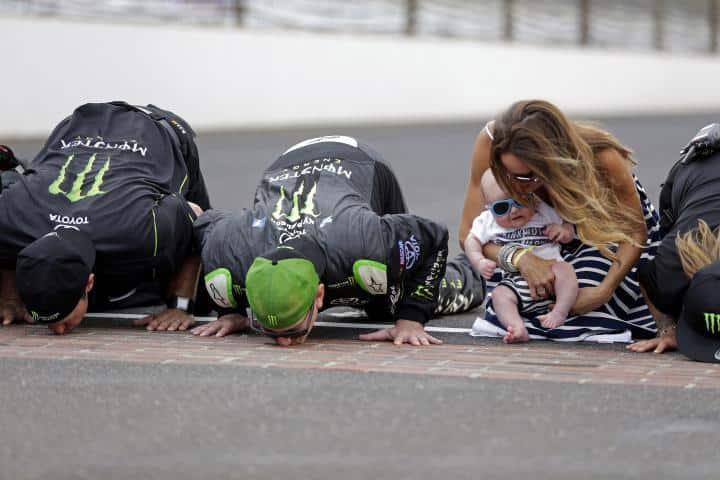 The caution flag flew over Kyle Busch leading late in the Xfinity race at Indianapolis again, threatening to derail a dominant performance that saw his No. 54 Toyota take control early and often at the 2.5-mile oval. It is a scenario that has plagued the all-time NXS race winner in three of the four races run at Indianapolis Motor Speedway. Busch has overcome two of them, busting through to take the victory, but the third cost him the win last season. In the four NXS races that have been held at IMS, Busch has led a total of 206 laps out of 400 completed, clearly the top car running every time out. The No. 54 car was the class of the field once again; however, were it not for a last-lap misstep by Ryan Blaney, the story in 2015 would have been how that late yellow stole another victory from his grasp.

The defining moment in the race was set up by that caution, posted on lap 71 for possible fluid on the track. The restart on lap 75 saw Ryan Blaney outrun Busch into turn 1. Busch had a faster car but was unable to make a run to pass Blaney. It looked like the race was going to finish with Busch relinquishing another win on a late restart, but Blaney’s car got tight in turns 1 and 2 on the final lap. Busch made a run off turn 2 and moved to the inside to attempt to grab the lead. Blaney forced Busch all of the way to the white line on the inside of the back straight, but did leave him just enough room to complete the pass. Busch went on to score his Xfinity Series-record 72nd career win.

Daniel Suarez finished third for his third straight top-five finish. Paul Menard was one of the six leaders and scored a fourth-place result while Elliott Sadler rounded out the top five.

Regan Smith crossed the line in eighth but was the highest finishing NXS points competitor qualified for the Dash 4 Cash. It is the second straight win in the program designed to reward and highlight regular competitors in the series. If Smith can claim the other two bonuses, at Bristol and Darlington, he’ll get an additional $900,000 at Darlington for a payout of a cool $1 million.

This race featured a larger rear spoiler designed to enhance slingshot passing. Ideally, it would increase drag which would punch a bigger hole in the air and allow cars following to close up and pass. The result was two on-track passes for the lead that did not happen on a restart. Suarez passed Busch on lap 11; then, Busch passed Blaney on the final lap. That was it. The eight lead changes among six drivers took place through caution flag pit stops or on restarts.

The Good – As mentioned above, Suarez scored his third straight top-five result. The rookie competitor scored a runner-up run at Bristol earlier this season for his first career top five, but the last three races have clearly been the best for the former NASCAR Mexico Series Rookie of the Year. Suarez is seventh in points, 10 behind fellow rookie Darrell Wallace Jr. for sixth and 36 behind Sadler for a spot inside the top five. Suarez crew credits the presence of several of his family members from his home in Mexico for his recent run of good luck, helping him adjust to life in NASCAR’s second-tier division. The Suarez family is heading back to Mexico after this weekend but don’t be surprised to see them return to cheer him on at Bristol for the next Dash 4 Cash race since Suarez is qualified.

The Bad – The only big incident of the day involved TriStar teammates Blake Koch and David Starr on lap 24. The drivers made contact entering turn 1 and Koch made hard contact with the outside wall, impacting it with the driver’s side of his car. That was not the bad part, thanks to the many safety initiatives that NASCAR mandates in the cars today. The bad was the response of the safety crew who took three full minutes to get to Koch after sustaining such a hard hit. It is interesting that, just a few weeks after James Hinchcliffe nearly died from injuries sustained in the same corner of the track but lived thanks to the quick response of IndyCar’s safety team, the safety crew for the NASCAR event took such an extended period of time to respond. This incident will be more fuel for the fire that’s burning for the sanctioning body to establish a weekly, traveling safety crew.

The Ugly – Mike Harmon deserves credit for running the entire race, even though he finished 13 laps down. Harmon drives for his own team that is on the thinnest of shoestring budgets. Harmon also recognizes that he’s not competitive and did an admirable job of staying out of the way as leaders came up to lap him roughly every eight circuits. No cars failed to qualify for the event so Harmon made it on owner points since his effort was well off the speed of most of the other racers. On a track as large and fast as Indianapolis, the disparity between the haves and have nots is greatly showcased and Saturday was no exception. Not bashing on Harmon but it was ugly how much slower he was than most of the other cars in the event. The XFINITY Series has to find a way to find more owners and more money looking to be a part of its field every week….

Underdog Performer of the Race – A 12th-place run for Ryan Sieg is the best effort for the family-owned team this season and his best finish ever on a non-restrictor plate track. Sieg had a third and a ninth-place finish at Daytona in 2014, but 12th is a huge step up elsewhere for a team that’s picked up additional money from Uncle Bob’s Storage Centers this season.

Double Duty Interlopers – Six different Cup drivers started the NXS race including race winner Busch, fourth-place Menard, sixth-place Harvick and seventh-place Kyle Larson. There were also two Truck Series drivers in the event, Timmy Hill and Erik Jones. Fortunately, they cannot take the money away from the Dash 4 Cash competitors. Blaney, Suarez, Sadler and Smith will be competing for the $100,000 at Bristol.

“The XFINITY Series has to find a way to find more owners and more money looking to be a part of its field every week…”
Great idea! I’m sure there are plenty of people just waiting to spend money on a race series where they have absolutely no chance of being competitive against the CUP LIGHT teams. Yep I’m sure next year there will be lots of new teams.

Mike, It is time for the racing press to do some soul searching. The Xfinity series is essentially extended Cup practice for the next day’s race. It is not a stretch to say it isn’t even racing anymore. So, it should be a surprise to no one that NOBODY is watching. You would better serve racing fans by constantly pushing NASCAR to fix the series rather than write almost fictional columns as if the series is vibrant.

John Q dont lose sight of the fact that in the France family’s eyes its not broken if they are making money. Its business my friend plain and simple.

No, until NA$CAR wants less for the privilege of lining Brian’s pockets to have his “product” on their track.

“Kyle Busch is the best XFINITY driver in history”

Maybe, in XFINITY, but I’d like to see him run against Sam Ard and the drivers he ran against. It would be appropriate to have had him run in the Busch series. He’d probably think it was named for him.