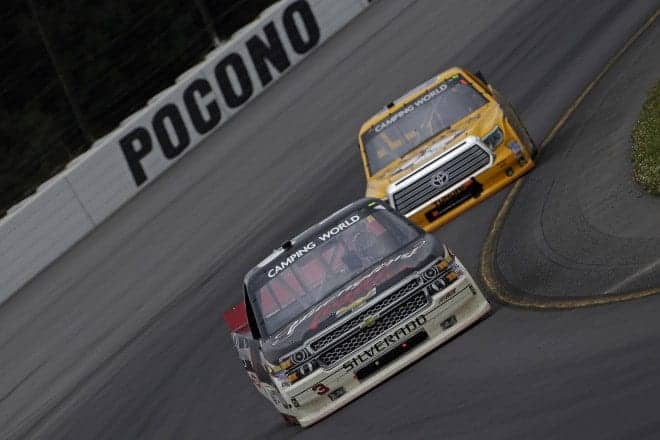 After a midweek show on NASCAR’s only dirt track, the Camping World Truck Series heads to the biggest track on the circuit.

Four NASCAR Sprint Cup Series drivers will run the 150-mile race, including the hottest driver on the circuit. Kyle Busch will make his first NCWTS start of 2015, piloting the No. 51 Dollar General Toyota for his own Kyle Busch Motorsports team.

Kevin Harvick will also make his first NCWTS start of the season, driving the No. 00 Haas Automation Chevrolet for JR Motorsports.

Fresh off of starts in Wednesday’s 1-800-Car-Cash Mud Summer Classic at Eldora Speedway, Brad Keselowski and defending race winner Austin Dillon will return on Saturday. Keselowski will compete in the No. 29 Cooper Standard Careers for Veterans Ford for his own Brad Keselowski Racing team, while Dillon will drive the No. 33 Rheem Chevrolet for GMS Racing.

Matt Tifft will make his third-career start, driving the No. 54 Toyota Car Toyota for KBM. Mason Mingus and Ryan Ellis will also return to the series.

The NASCAR Camping World Truck Series will return to action on Friday, July 31, for a lone practice session, before returning on Saturday for Keystone Light Pole Qualifying at 10 a.m. ET. Coverage of Saturday’s Pocono Mountains 150 will begin at 1 p.m. ET on FOX Sports 1.