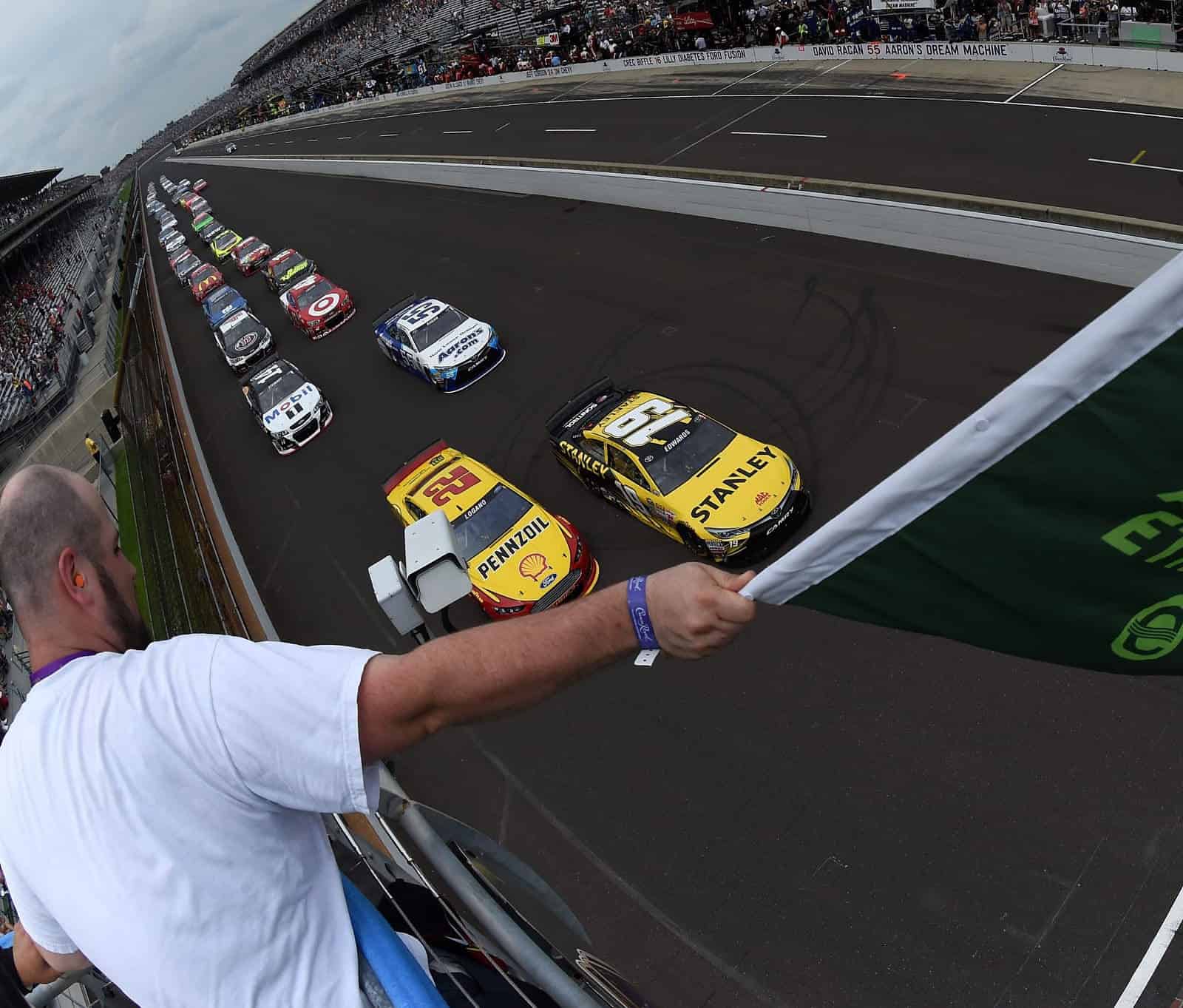 Going into Sunday’s Jeff Kyle 400 at the Brickyard, everyone was excited to see how the new high-drag package would work. Expectations that the package could breathe some life into the dull Indianapolis race were mixed. However, during the practices leading up to the main event, drivers were vocal about their ability to draft up to the car in front of them, meaning they could have a chance to pass if they could slingshot at the right time. Perhaps NASCAR would bat two-for-two in regards to mid-season rules changes.

Each time the green flag flew on Sunday, the package shined. Drivers fanned out four-wide down Indy’s narrow frontstretch, only to form two lines through the turns and then fan out again on the back. For a couple of laps, cars were able to run down the driver in front and pass them easily. The draft was visible along the straights, with cars lined up bumper to bumper and having to slow down when the lanes in front were blocked. You could sense the speed those first few laps, and then…

…But Much Left to be Desired

Then, those cars would spread out and the old Indy would reappear. That isn’t to say that the race was a total stinker. No, the restarts saved the event by making it interesting, if only for a few laps. It was just that after those few laps, single-file racing and long green flag runs reared their ugly heads. There was passing, but nothing like fans wanted. And boy did they share their opinions, taking to social media to show their displeasure with the package.

The drivers, too, weren’t too keen on the package, even before taking to the track. Kevin Harvick had this to say about the package following the race: “[a] huge science project that probably didn’t really change that much.” Jimmie Johnson, a four-time Brickyard winner, went into the weekend pessimistic, saying that “I don’t think we’re going to get the passing that NASCAR is hopeful for at Indy.” And that’s exactly what happened. A few laps of excitement, and then a follow-the-leader parade. The same problem that the package was supposed to fix. Michigan is just two races away; will the package work any better there?

One unintended consequence of the new package was the increase in heat within the cars during the race. Because the car was more sealed off, air was unable to flow through the vehicle, and temperatures, already extremely high for the drivers, soared higher. At one point, a thermometer placed in Casey Mears’s car for the race broadcast was north of 140 degrees. That’s hot. The Xfinity race on Saturday saw the same problem, with Elliott Sadler heading to the infield care center for some fluids following the race.

NASCAR drivers are used to heat, but following two weekends where drivers needed medical attention because of heat-related illness, maybe it’s time to invest in some R&D for cooling systems. It shouldn’t be hard to make a case for this; look at all the attention on driver safety this year. That should include health. One immediate fix would be to look at mandating cooling systems for all drivers during the summer months. It was pointed out on the race broadcast that Carl Edwards does not use a cooling system, and Joey Logano was only using one for the second time. Having all drivers using that technology would be a good way to start the process of keeping drivers cooler in the car.

Kyle Busch’s season to remember continued Sunday. After sitting out the first 11 races of the Sprint Cup schedule after breaking his leg and foot in an NXS race at Daytona, he’s won four of nine Sprint Cup races and two of four NXS races, including a weekend sweep at Indianapolis. His Cup win at Indy was his third consecutive win, a feat that hasn’t been accomplished since Johnson swept Martinsville, Atlanta, Texas and Phoenix in the 2007 season.

If Busch can win this weekend at Pocono, he’ll match Johnson’s feat and more than likely catapult himself into the top 30 in points, meaning he’ll be Chase-eligible if he can keep the position between now and the last lap of Richmond. Can Busch make it four in a row? His record at the Tricky Triangle suggests not, with an average finish of 18.3 and five DNFs. But Busch is as hot as a Sprint Cup car at Indianapolis right now; in a sport where momentum is key, Busch should be considered a favorite heading to Long Pond.

Patrick, Haas Looking to Stick Together

Danica Patrick’s contract is up at the end of this season, but Motorsport.com is reporting that she’ll stay put with Stewart-Haas Racing in 2016 and beyond. While other teams would love to sign Patrick and grab the millions of sponsorship dollars and television exposure that she brings to the table, this is the only move that makes sense for Patrick.

She has made improvements this season, even running in the top five for a time during Indianapolis, and leaving SHR would throw a wrench in her development because she’ll have to get acclimated to a new team. SHR fields two of the best cars in the field right now, and although owner/driver Tony Stewart has struggled this season in the team’s third car, he showed speed at his hometown track this weekend. Patrick should easily sew up sponsorship; in fact, the article said that potential suitors are coming from the restaurant and mortgage industries. Except an announcement in the upcoming weeks.