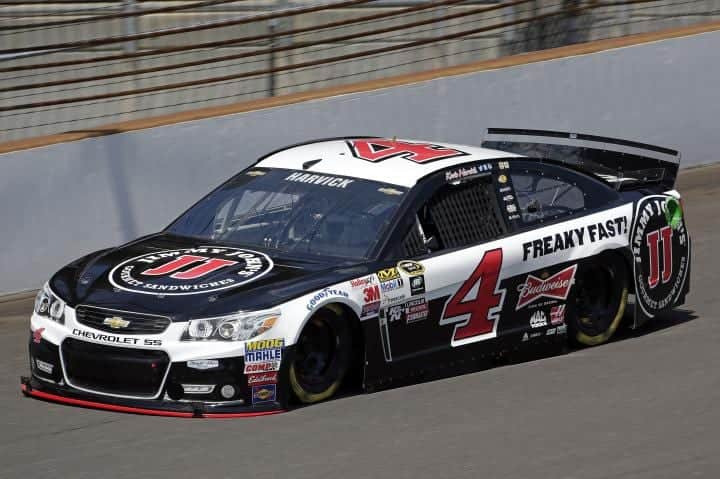 NASCAR’s high-downforce, high-drag package was the centerpiece of conversation at the sport’s Brickyard 400 this weekend. The race has the second-largest purse out of all 36 events on the schedule but that was small consolation when looking at the balance sheets of Sprint Cup owners. The sport’s move to different rules, requiring adjustments from a larger spoiler to a different-sized radiator pan, required extra testing time and perhaps even a last-minute session at the wind tunnel. There’s money to be spent on those adjustments, unexpected cash that comes straight out of the pockets of Sprint Cup organizations themselves.

“I know everybody spent a lot of money to get the cars here and put a lot of time and effort into putting the puzzle together,” Kevin Harvick said Sunday after running third. “I know my team did a lot of extra work to come to this race after we had already come here and tested and already spent that money to come here and test for a few days. Then to come back and have to race something different was a huge undertaking for the teams for a huge science project that probably didn’t really change that much.”

Harvick has been the most outspoken in terms of teams shouldering 100% of the cost of changing rules. The Race Team Alliance, that infamous conglomeration of NASCAR team owners, has been silent on the issue in public and it’s hard to gauge how much extra money is being spent. All we know for certain is these race-by-race adjustments make it difficult for part-time teams or potential new owners to take a shot at making one of the sport’s “crown jewel” events. Why make an attempt when the cost of entry has become so high you probably won’t even make back your money on a $120,000 payout for last place? If the cost of changing a car you purchase, just to fit NASCAR’s new templates is twice that amount, even a primary sponsor might not be enough for you to break even.

Add in Kentucky’s qualifying rainout, rules that sent home part-timers Leavine Family Racing and the Wood Brothers’ Ryan Blaney, and it’s clear it’s been a tough month for those trying to occupy an occasional spot on NASCAR’s 43-car Cup grid. No wondering why, then, the entry list for a Brickyard 400 race, once considered a “financial windfall,” was just 46 cars vying for 43 spots — with all three part-time efforts coming from established teams. (You had Leavine, the Woods and the No. 25 Hendrick Motorsports car for Chase Elliott). Juan Pablo Montoya, who ran for Team Penske at Indianapolis with a third car last year, passed up the opportunity to do so in 2015. Gone are the part-time efforts from Johnathan Cohen, Robby Benton, and Curtis Key as they’ve been unable to break through with sponsorship or speed.

It’s the elephant in the room for NASCAR as they look to establish a diverse baseline of teams for 2016 and beyond. None of the owners who have attempted a race this season are new; all of them are either well-established or perpetually trying to squeeze into the grid each year. Only 51 teams in total have attempted an event through 19 races; just 49 of them have made a starting lineup. Compare that to 2001, the first year of the sport’s national TV contracts where 73 cars made at least one attempt. Go back to the mid-1990s and the number swells up to over 100.

A limited barrier of entry (read: money) has led to the slow dilution of the ownership ranks. What’s worse is the actual amount of owners these days is far less than 51. The emergence of multi-car teams means we’re down to less than two dozen fighting for a spot on the grid. Consider the field of 46 that tried to make the Brickyard….

Richard Childress Racing: 4 (add Brian Scott in the No. 33)

That’s right; the entire future of Sprint Cup competition depends on the financial fortunes of 21 men. Really, when you look at how some of those single-car teams are aligned, the total number could be even less, but we’ll stick with that. Just 21 “teams” within an individual field comprised of 43 cars limits the diversity of setups and competition. It’s far less than 32 NFL franchises, 30 MLB teams and about the same as the growing MLS league within the United States.

NASCAR’s four-team rule limits expansion, so even though making the rich richer might not be a good thing expanding the grid through them is not even an option. Since they’re the only teams with money these days, it limits Silly Season as most of their drivers and sponsors are comfortably signed. No wonder why the only moves for 2016, should Danica Patrick re-sign with SHR will revolve around manufacturer realignment and one lone retirement (Elliott replacing Jeff Gordon in the No. 24.) Instead of talking about 30-35 “teams” who each come to the table with different ideas, personnel and levels of competition we’re restricted to speaking on a half-dozen truly competitive ones. The four-car bigwigs come to the track many weeks within a tenth of a second of each other in terms of speed and can often cash in on that in this era where nothing seems to break mechanically. Kentucky was the most recent example, as JGR posted all four of their cars inside the top five.

How do we fix this problem? Well, the owners are private contractors so as we’ve seen through the years keeping them from spending money is near impossible. The solution, or so it seems will come straight out of the coffers of one and only one bank account: NASCAR, Inc. The sanctioning body, when making rule changes may need to show some movement in providing a limited amount of cash for teams across the board. If revenue sharing is an impossibility, maybe they can reward teams with extra cash for showing up and attempting every event. The most dramatic move to entice new ownership would also be the most controversial; establish a new rule of two teams per owner, max. It won’t happen – half the RTA would line up in protest – but at some point, there’s going to need to be some new members. Mr. Hendrick, Mr. Penske, Mr. Roush are all not getting any younger. The small teams aren’t climbing up any higher and at some point those owners are going to get frustrated and sell.

Back in the day, NASCAR was a plethora of big and small teams alike, lower budgets still being able to break through for top-10 finishes now and then. That’s going to be the key to their survival, long-term as the same teams and the same drivers can only make the same Chase for so long. You know what makes a Brickyard 400 special? When legends like AJ Foyt used to take time out to try and make the field. It’s the same way NASCAR Cup drivers treat Eldora, a race in which half of them would kill to participate inside the Truck Series.

We just need some extra cars and some interested owners to make that happen. Money, cooperation, and support is needed; we’ll see if NASCAR can now take the next step. They’re listening this year, a huge leap forward for them but the time is coming soon for action.

You kind of have two opposing points in the above article Tom. On the one hand you talk about the high costs the teams face in dealing with the ever changing rules. On the other hand you talk about the limited number of owners and teams and how to increase diversity. If you limit teams to two cars you will lose economies of scale which will make it even more expensive and difficult to keep up with the rule changes. Kind of a catch 22 there.

Bill, Both you and Tom seem to be missing the only point really important to NASCAR. How will any of this effect the France family financially?

I don’t like seeing testing sessions be a waste of time and money when the rules are changed. But, the racing is so bad that changes need to be made. The package for Kentucky gave us much better cookie cutter racing. I was doubtful that higher downforce/drag would work at Indy but it may help at Michigan. I’d prefer NASCAR go to as little downforce as possible and have mechanical grip be the primary determiner of handling and speed. It gives the drivers a chance to outdrive their opponents rather than be stuck in an aero-push parade.

IMHO the basic premise here is flawed. For some time it has been alleged that the goal was to have 10, or 11 depending on who you ask, 4 car teams.
In addition, for franchises to have any value you must limit the number of franchises. That of course ties into the statement above.
So to say that that the limited number of owners is a problem, while it may be correct, its by design.