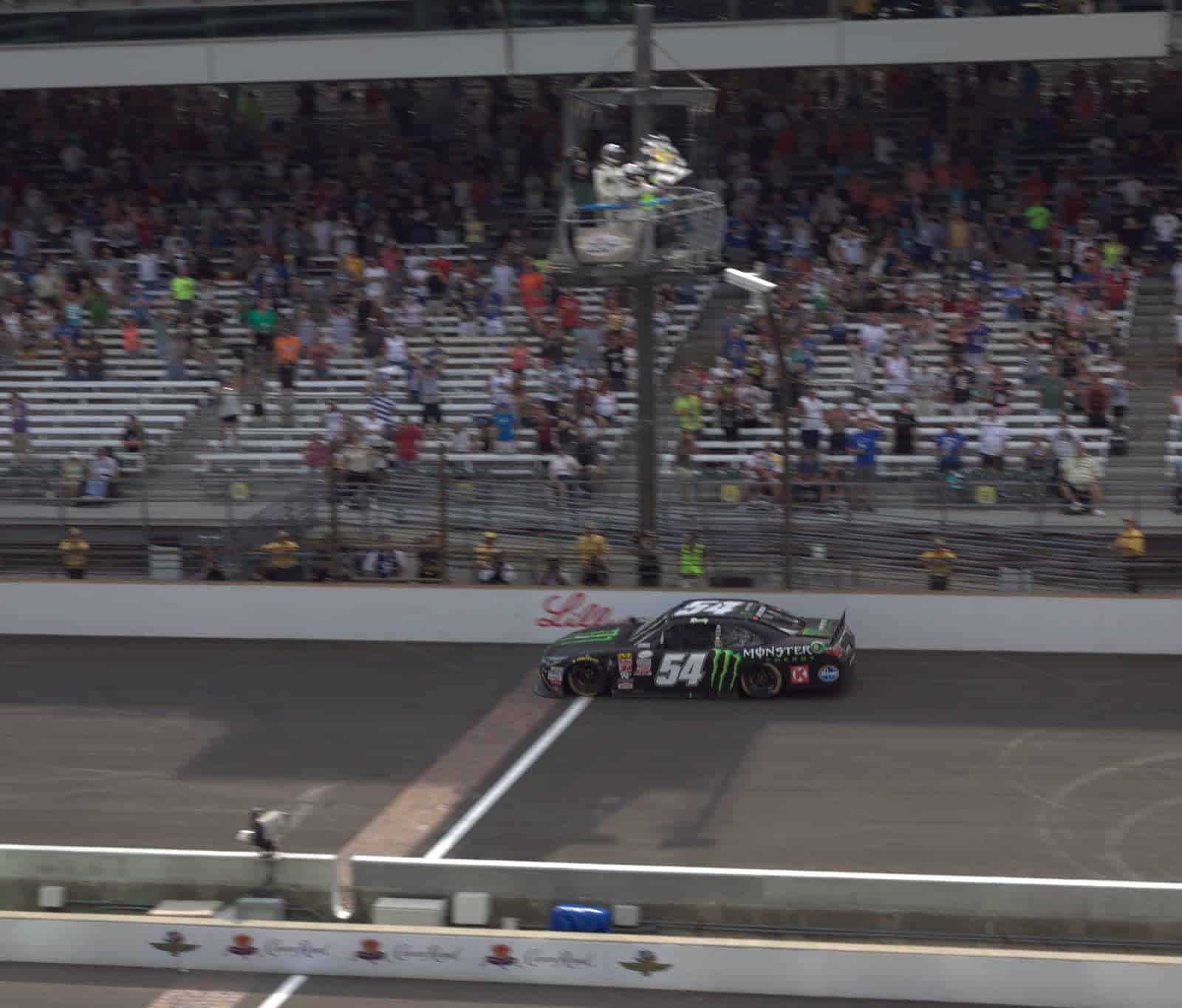 Sprint Cup Series: From Sidelines Back To Superstar – Kyle Busch‘s battle back from injury has been well documented. So has his return to Victory Lane, three times in the last four weeks entering Indianapolis. But Busch’s Brickyard 400 triumph Sunday, the first for Toyota at the esteemed 2.5-mile oval simply took his comeback to another level. He didn’t have the fastest car; that belonged to Kevin Harvick, driving yet another dominant No. 4 Chevrolet who led a race-high 75 laps. He should have been in control down the stretch; instead, he fell victim to Busch’s excellence on restarts.

When the No. 18 car scooted out in front, Busch knew the race was won as clean air still ruled the day with NASCAR’s new rules package. Joey Logano made a valiant effort down the stretch but even he was scratching his head post-race as to the absolute run of brilliance we’ve seen from Busch. Whether it’s strategy, raw speed, fuel mileage, pit stops… you name it, the No. 18 and Joe Gibbs Racing have been running at the top of their game. While many observers are uncomfortable at the thought of Busch earning the season title – he’ll have missed nearly a third of the season – he now has as many wins as anyone in the series this year and will be racing for four straight victories Sunday at Pocono. That success makes it harder than ever to deny a driver who, at age 30, may finally be maturing into someone capable of contending under NASCAR’s intense, multi-round playoff format. – Tom Bowles

Xfinity Series: Bad race highlighted by stellar finish – As predicted, the 250-mile event at Indianapolis was rather uninteresting. Passing was once again at a premium, and it was seemingly considered a joke with approximately 10,000 fans in the stands. Yeah, only 10,000 people at the most historic track in all of motorsports….

Throughout the race, the majority of NASCAR accounts on Twitter were praising Lucas Oil Raceway – formerly known as Indianapolis Raceway Park – one of the most amazing short tracks in America. When the offer was made to bring the Xfinity Series to the Brickyard, it was an easy choice for NASCAR officials, especially with a larger purse and the hope of more fans heading to the 2.5-mile speedway.

Instead, Saturday at Indianapolis is now considered a joke. Kyle Busch and Ryan Blaney had a fantastic battle at the end of the race, which was probably the only major fight for position on Saturday afternoon. The headlines Busch made this weekend are undoubtedly some of the biggest he has seen in his career. However, imagine just how great it would have been for young Blaney to put a Team Penske car in Victory Lane as he searches for sponsorship to put him full-time in the Cup Series next season. Sadly, what should be a great highlight reel weekend for the series now continues to simply showcase its major problems. Joseph Wolkin

NHRA: Burn It Down – It was an exciting and interesting day for the NHRA at Mopar Mile-High NHRA Nationals from Bandimere Speedway for a number of reasons. First, the Pro Stock final featured a burndown, which is a battle of wills on the starting line essentially, between two series veterans. Not to be upstaged, the Top Fuel elimination was decided by about six inches – if that. Two of the day’s winners, Steve Torrence and Larry Morgan, came from small, self-owned teams. And in Funny Car, the rivalry between John Force Racing and the series’ other powerhouse, Don Schumacher Racing, was kept alive when John Force went up against DSR’s Jack Beckman in the finals.

Back to that burndown; it’s something fans love to witness. Both drivers, Allen Johnson and Morgan, bumped in and lit their pre-stage lights but then both decided they wanted to be the second one to fully stage. The thinking is that staging second can give an advantage because it’s upon the second car that the timer for the starting lights kicks in. Facing off against Johnson, who’d won six of the last eight races in Denver, Morgan knew he needed to gain whatever advantage he could.

So each waited for the other to stage, in this case for over a minute and a half before Johnson finally gave in and rolled. Whether the staging battle had anything to do with it or not, the reaction time advantage and ultimately the race went to Morgan on a holeshot win with a 6.944-second, 199.02-mph pass to Johnson’s losing 6.930-second, 199.23-mph run.

“I got on the radio about one minute into the stage and I told my guys, ‘I guess Allen just doesn’t want to stage,'” said Morgan.

More Morgan: "[The burndown] was good for the fans and it was a lot of fun for us. I was willing to sit there until I ran out of gas.”

Morgan also rolled by Joey Grose, Jason Line, and Erica Enders en route to his epic battle with Johnson in the finals.

Top Fuel could not have been any closer, as Torrence ran a 3.925-second, 319.37-mph pass to nip Tony Schumacher‘s 3.940-second, 305.08-mph run at the finish line and score his first victory since Bristol in 2013. The margin of victory was 0.0011 seconds. Torrence also beat Jenna Haddock, Richie Crampton and Larry Dixon to get there.

The rivalry between JFR and DSRg has been a story this year, with Force directing some strong words in DSR’s direction – particularly as former JRF crew chief Jimmy Prock now tunes for DSR’s Jack Beckman. Those two would face off in Denver, with the win going to Beckman at 4.190 seconds, 293.92 mph over Force’s 4.291 seconds, 258.96 mph. Beckman also defeated Todd Simpson, Matt Hagan and Alexis DeJoria to meet up with Force.

Pro Stock Motorcycle was also on tap this weekend and it was point leader Eddie Krawiec taking the win with a 7.239-second, 185.51-mph pass over Hector Arana Jr. at 7.230 seconds, 186.43 mph. Krawiec also beat Chaz Kennedy, Matt Smith, and Jim Underdahl to get to the matchup with Arana Jr.

In other news, NHRA announced changes to the Pro Stock class designed to increase spectator appeal, enhance the pit experience, and to make the cars more relevant from a technology standpoint. Three of these changes will take effect at the next event in Sonoma. Teams will now be required to back their cars into the pits and leave engines uncovered, allowing fans a better view and accessibility to the team and drivers. Crew members will no longer be allowed to stand by the cars and hold them in place when they start their burnouts and finally, teams will need to create automobile manufacturer identification headers that will be visible on the cars’ windshields. More big changes are on tap for 2016. For the full story, see this Thursday’s Nitro Shots. – Toni Montgomery

Formula 1: Fitting Finish for Ferrari – The beginning of the grand prix at Hungaroring looked similar to most in the 2015 season. With the Mercedes duo of Lewis Hamilton and Nico Rosberg starting one-two, nothing seemed out of the ordinary. The lights out brought a stellar start from Sebastian Vettel and Kimi Raikkonen of Ferrari.

Vettel took the lead and held the position throughout, as Hamilton drove a mess of a race and still earned a sixth-place finish, while Rosberg and Red Bull’s Daniel Ricciardo collided in the waning laps in an incident that dropped Rosberg to eighth.

Vettel took the checkered flag and earned Ferrari their second win of the year. As he drove the track on his cool-down lap he could be heard speaking in Italian, celebrating the win – yet also making mention of Jules Bianchi and his place in the Ferrari world.

Danil Kvyat finished second, for the best of his career, and Ricciardo earned the third spot on the podium for the Red Bull’s team best finish. Raikkonen, who had run second for much of the race ended his day after suffering mechanical issues.

Perhaps one of the more interesting storylines featured Fernando Alonso and Jenson Button, of McLaren, both finishing in the points for the first time this season. – P. Huston Ladner

Short Tracks: There were a group of asphalt short-track events at a familiar place outside the Brickyard and the Circle City. Lucas Oil Raceway, formerly known as Indianapolis Raceway Park, hosted the ARCA Racing Series and the ARCA/CRA Super Series on Friday. NASCAR Camping World Truck Series competitor and 2014 Snowball Derby winner John Hunter Nemechek took the pole and then took the lead from Grant Quinlan shortly after halfway to go on for a dominating victory. It was a bit of redemption from the previous year’s event when Kyle Busch nipped him at the line for the win.

In the ARCA show, two-time defending CRA champion Travis Braden made his debut a thrilling one. The West Virginia University student fell a lap down prior to halfway. A caution at lap 110 called for him to take on four tires while everyone else saved theirs for later. However, another caution never flew and Braden charged to the front, reeling in leaders William Byron and Brandon Jones and passing them for the lead with 20 laps to go.

BEARDEN: Newman Returns To His Roots

Without a doubt the F1 race from Hungary was the race of the weekend. Showed that you can have a dramatic race without debris cautions.