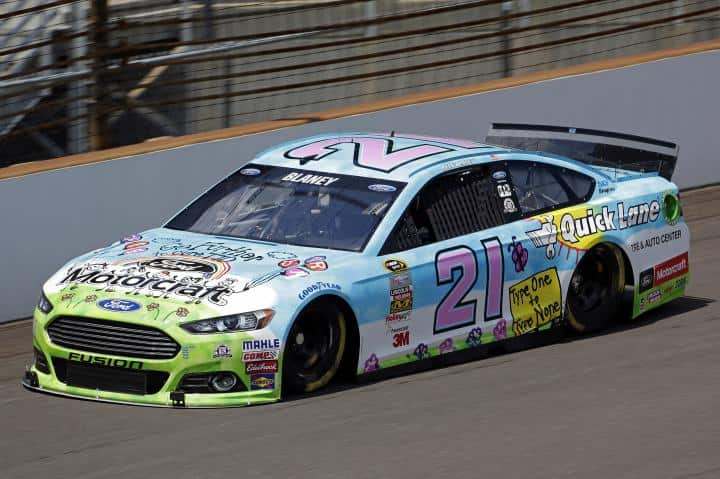 I’m not ready to say that Indy got its Sprint Cup swagger back just yet, but at least Sunday’s race at the famed 2.5-mile oval was a step in the right direction. Certainly, the different rules package had to help there again. But meanwhile, it doesn’t matter what the rules package is, or what the track is, the big goal right now is just to try and keep up with Kyle Busch.

Yes, it doesn’t take a mathematician to figure out just how good Busch is going right now. Busch won his third straight Sprint Cup race becoming the first driver to win three straight since Jimmie Johnson in 2007. And now that he has won four out of five, it also doesn’t take a genius to realize the move to Adam Stevens as crew chief for the No. 18 was a pretty good one, too. Busch became the first non-Hendrick driver to win three straight since Rusty Wallace accomplished the feat in 1994. The other driver to hit the trifecta besides Johnson after that was of course, Jeff Gordon, who accomplished it three times. Johnson also won three straight in 2004.

But for now, the focus is firmly on Busch. You have to wonder: has he matured just enough to win a championship? Having a child will do that to a man, and maybe little Brexton keeps him calm enough to take that destructive edge off of Busch, yet still allows him to keep his competitive fire at a healthy level. Whatever the case, when a driver wins three straight and then celebrates by going to a Steak & Shake, well, that’s a pretty good sign he’s not too full of himself right now. It wouldn’t be a surprise at all if Busch wins at Pocono as it’s not unusual for drivers to have the same success at each of those tracks. And lastly, for those of you scoring at home, Busch is now just 23 points out of that 30th spot in the standings. It seems hard to believe the top-30 issue was ever an issue at all now.

In a related matter, all of that talk about what might be wrong at Joe Gibbs Racing seems a bit crazy now, too. Sure, Busch is on a roll, but there have been two Gibbs cars in the top six in each of the last three races. That team seems to have figured out something in recent weeks, now it’s just a matter if some other teams can figure out the same stuff by the time, if not before, the Chase starts, especially since all four Gibbs cars (well, that’s assuming Busch makes it) will be in the Chase.

Well the rain finally stopped on qualifying days and Ryan Blaney in the No. 21 Ford was able to show some skill in the Sprint Cup car. He finished 12th at Indianapolis Sunday, which is a pretty good showing for a driver who is not a regular in the Cup series. But what you also have to like about Blaney is the way he handled his second-place finish Saturday. He admitted to getting schooled a bit by Busch, who won that Xfinity Series race with a last-lap pass on Blaney. Blaney didn’t blame his crew chief, or that his car had a poor setup or his relative inexperience on a track like Indy, which can be a pretty tough track for any driver because of its four distinct corners. Blaney’s self-admission is a good sign of what is to come for him in the future.

Martin Truex Jr. continues to show that he is for real, in case there were any doubters left. Truex finished fourth Sunday and now has 15 top-10 finishes in the 20 races this season, tied with Joey Logano for second most behind Kevin Harvick’s 18. It’s really no surprise to see Harvick and Logano on that list, but if anyone outside the No. 78 team claims to predict Truex would be on this very short list at the beginning of the season then I would say they have a very short memory.

OK, I’ll admit the only reason he is this high is just because of what happened in qualifying on Saturday. Tony Stewart gave his hometown crowd some hope by posting the fastest lap in the first round of qualifying Saturday. While that run solicited some big cheers for the crowd at IMS, it was about all they had to cheer for all weekend. Stewart finished fourth in the final qualifying and then was never a factor in the race as he finished as the last car on the lead lap in 28th. But he did have that one qualifying lap and for a team that’s desperate to find anything to build on, that may be one tiny sliver of hope.

Clint Bowyer had a nice run on Sunday with a seventh-place finish, but this isn’t about what he did Sunday. The problem here is that right now, Bowyer would be in the Chase, but that doesn’t include the aforementioned Busch. So, when Busch hits the top 30 in points, that means Bowyer would be out. And right now, he is 20 points behind Paul Menard and Kasey Kahne who are in 13th and 14th with 558 points. Bowyer had six races to make up that ground, and while it’s not an impossible task, he has his work cut out for him for sure.

All of those romanticized Jeff Gordon farewell tour thoughts have long been gone. But you know, this was Indy he was at and with so much success there, it would not have been completely foolish to think he could pull off a victory in his final race at the Brickyard. However, the disappointing season continued for the No. 24 when an early accident put Gordon out the race after 110 laps relegating him to a 42nd-place finish. Now, Gordon is still in pretty good shape to make the Chase, being 37 points ahead of Bowyer. But without a win, it’s hard to see Gordon as a serious title contender right now.

While Joe Gibbs Racing seems to have figured out its issues, that’s not been the case with Roush Fenway Racing. The top Roush Ford Sunday was Greg Biffle in 19th. And Biffle is also leading the points for Roush in 18th. But he’s not really sniffed a win. The three Roush cars have combined for a whopping two top-five finishes in 60 races. That’s not a very good percentage, no matter what sport you’re talking about.

I saw no schooling, I saw Mrs. (I never heard of Kyle before I met him, ahem..or something to that effect) Busch making a mental note (she should have) to send a years supply of Omaha Steaks to Derrick Dope, cause without that incident..he was not going to catch the young and talented Blaney. Too bad it happened that way..we would have been spared his usual arrogant interview, as he would have stalked off to his trailer.