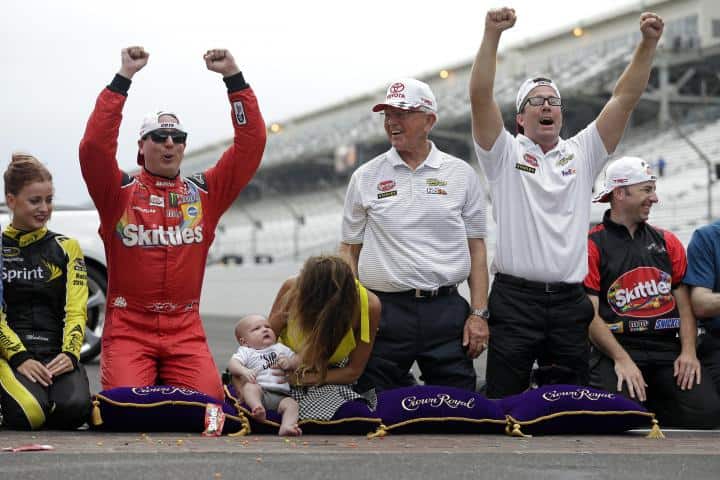 If you have been following the Sprint Cup Series closely, you know that Kyle Busch has won four of the last five races in the series. Busch, who missed the first eleven races due to an injury, continues his hot streak going into the Pocono Raceway.

Even though Busch is back behind the wheel of his No. 18 Toyota, he still is going through a recovery process. Busch is still taking things easy by not riding on the truck following driver introductions and running on foot. He noted that he came back much quicker than he expected.

“I wasn’t sure how fast I’d be able to return, but I’d say it was a little quicker than what many of us expected, which was fine,” said Busch on Tuesday’s teleconference with the media. “And then getting back in the race car, like I said, it just maybe took a couple weeks to kind of knock the rust off get a feel for everything again, but once we got that kind of all out of the way, it seems like everything has just been coming together.”

After the injury in the Xfinity Series season opener at Daytona, Busch thought his season was over. Busch noted that after understanding the surgeries and therapy process, he could return much sooner than the original estimate of around 16 weeks.

“I did think it would probably take a full 12 months to recuperate and recover and back to normal,” Busch continued. “Through the surgery in Daytona and then understanding what all was going on there and then through the surgery at Charlotte to fix my foot, you know, and understanding and talking to the doctors there that did everything that went on, they gave me a better synopsis of how it was all going to turn out and what it was going to look like.”

The Las Vegas driver will have to undergo another surgery in December to remove plates in his left foot and screws in his right leg. The rod placed in his right leg will more than likely stay in place.

Busch doesn’t think returning to a 1.5-mile track with the typical package will hurt the racing team. His only start on an intermediate came at the Kentucky Speedway with the track specific package, which he drove to victory lane. He will have some time, though, as the next intermediate track will not be until September 20 at the Chicagoland Speedway.

“I thought we had a good show,” Busch continued in the teleconference. “Obviously I won, so I think I’m a little partial maybe, but besides that, you go to Chicago and Kansas and Charlotte, Texas, those places with the typical package, I don’t think that that’s necessarily going to derail our success or take anything away from what we’ve done or been able to do this year. I’m fine with it. I think that I feel like we’re ready. I don’t feel like there’s anything wrong with our cars, with the current package, the normal package let’s call it, and I look forward to getting to those racetracks.”

Busch still isn’t locked into the Chase despite having four victories. Busch goes into the Pocono Raceway sitting 32nd in points and 23 points outside the top 30, a threshold he needs to reach if he is going to compete in the postseason. With six races until the Chase cutoff, it is becoming more and more likely he’ll make the exclusive club this year.