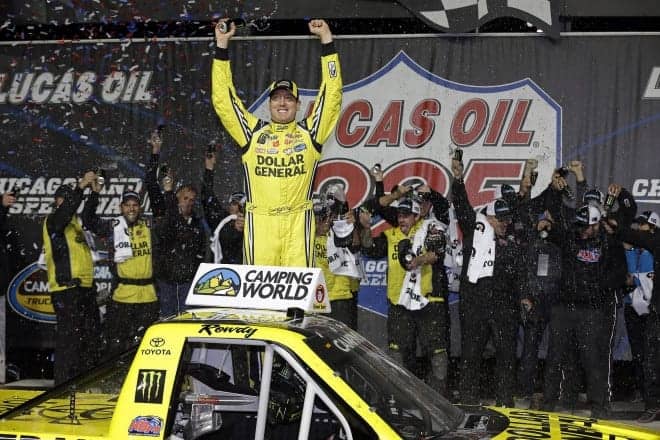 Kyle Busch will pilot the No. 51 Dollar General Toyota Tundra on Saturday in the sixth annual Pocono Mountains 150 at the Pocono Raceway. Busch has yet to strap into a truck this season after making 10 starts in 2014, mostly due to a serious injury incurred in the Xfinity Series season opener at Daytona International Speedway earlier this season.

This weekend will start a four-race stretch in the series for the Las Vegas native. Additionally, Busch confirmed on Tuesday’s teleconference that he will race in the Camping World Truck Series events at Michigan International Speedway, New Hampshire Motor Speedway and Bristol Motor Speedway later on in the year. He has no plans to run any others at this time.

Busch has found a lot of success in the series after winning in seven of his 10 starts last season. He also started four of those 10 races from the pole with crew chief Eric Phillips on the box. His worst finish came in August where he brought home a 24th-place run at Bristol.

With Phillips moving over to the Joe Gibbs Racing organization at the beginning of the year, Jerry Baxter will try to match that success with Busch. Baxter has taken Christopher Bell, Matt Tifft and Daniel Suarez to five top-five and nine top-10 finishes combined in 2015.

In 125 Camping World Truck Series starts over a span of 12 years, Busch has captured 42 victories, 79 top-five and 99 top-10 finishes in the series. He has also started on the pole in 16 total events during that same timeframe.

He’s stealing again. Can he be charged with theft over $5000?

How about new rule for NASCAR (sure, what’s one more?) that states that drivers can only receive prize money from one series, (same goes for points)?

amen…..sure the wins don’t count for championship, but when he wins he’s taking the money away from teams that need it to stay competitive and in the series.

So there will be a packed house and the race of the century, right? (sarcasm intended) On the other hand, maybe he figures he needs to rack up as many wins as possible before this series is allowed to fade away.

Wow, Brett what insightful reporting. NASCAR has allowed Cup drivers to all but kill off this series. What few fans remain are furious. But somehow you either didn’t notice or don’t see a story there. You do a disservice to the fan base.

You guys seem to forget that Kyle owns s truck team. Why would he want to undermine the sport? Haters gonna hate.