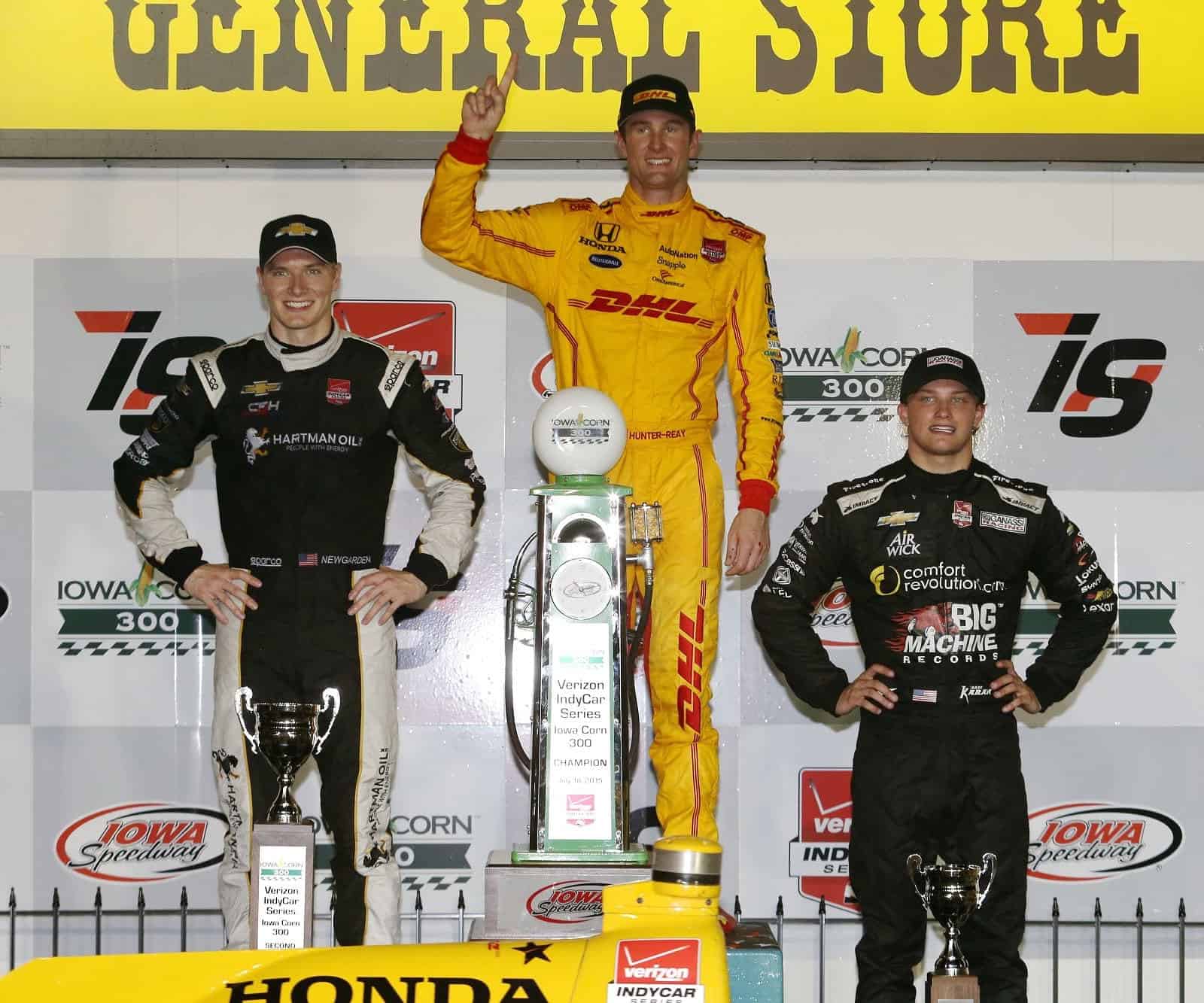 Time just flies by when you’re having fun and on that note, the 2015 Verizon IndyCar Series season is just about to enter its final month. There are still three races to go so lots of racing and a championship to decide, but already there are some things that the folks at INDYCAR can look at from this season and be very happy about, both for what they are right now but also as an indicator of the positive direction the series is going in for the future. Yes, that’s right. Positive direction.

Without further ado, here are some things series officials can hang their hat on. Perhaps what is most interesting about these items is considering how they are or may be related.

1. American Sweep: The podium at the Iowa Corn 300 a couple of weeks ago featured three American drivers, the first such podium since the 2006 Indianapolis 500, with Ryan Hunter-Reay, Josef Newgarden and Sage Karam. It gets better than that. Graham Rahal was right behind them for fourth, with Ed Carpenter in sixth and Marco Andretti in seventh. That’s six of the top seven spots.

It gets harder and harder to accept the argument that fans don’t care for IndyCar because there are too many foreign drivers dominating. How many Americans run in the series was detailed earlier this year in another Wednesday article, American Pride: A Shot in the Arm for IndyCar, but since then those same drivers have gone on to make their statements on the track, culminating in the big sweep of Iowa a couple of weeks ago. In addition to Hunter-Reay’s win, Newgarden has also tasted victory twice and Rahal has taken home the top prize once. Speaking of Rahal, he’s got something to say about this next point.

2. Championship Battle Heating Up: With three races remaining, Juan Pablo Montoya still holds on to the top spot, but following some bad luck for him in Iowa, and a number of strong runs for Rahal, things have tightened up considerably, with Montoya out in front of him by just 42 points. Bear in mind also that the final race of the season in Sonoma is worth double points.

Championship battles are actually one area IndyCar has been getting right for quite some time, with some of the closest of any series just about every year, and it looks like this season will be no exception.

3. Parity And The Little Guys: The number one complaint, bar none, for IndyCar in recent years has been the overwhelming dominance of a certain two teams. Fans complain that it’s all Penske and Ganassi all the time. Looking at the championship standings, you would be tempted to write this off as just another Penske/Ganassi year, but that’s not necessarily the case. Yes, three Penske cars are in the top five, but only one Ganassi car appears there, and indeed, the next teammate to Dixon is Tony Kanaan in ninth. Also it’s worth noting that Rahal is ahead of all but one of those Penske guys.

The three guys behind them and in front of Kanaan are Sebastien Bourdais, Andretti and Newgarden. Andretti comes from a sizable team, even if Andretti Autosport has had some struggles this year, but Bourdais and Newgarden, like Rahal, both come from much smaller organizations. Yet there they are, in the thick of things and ahead of the fourth Penske car and all three of the other Ganassi rides.

Those little guys have also made their presence known in the area of race wins as well. There have been nine different winners in 13 races, with no one winning more than two and the mulitples going to Montoya, Dixon, Newgarden and Bourdais. Power, James Hinchcliffe, Rahal, Hunter-Reay and Carlos Munoz make up the rest of the winners’ list.

4. Ratings Are Up: This one is possibly a direct result of the other ones mentioned so far. The Verizon IndyCar Series and NBCSN have been knocking it out of the park lately. The Iowa Corn 300 had average viewership of 541,000 in a prime time Saturday night slot, with a peak viewership of 650,000 for the battle between Hunter-Reay and Newgarden in the closing laps. That made it the most watched IndyCar race on the network since 2011. As an aside, thankfully all those viewers were treated to a spectacular race.

That also made it the third consecutive race on NBCSN to get more than a half-million viewers and to also show big growth over 2014. For Iowa, it was growth of 22% over last year. Milwaukee posted a 64% improvement and Fontana, which did change to an earlier date in the season, posted an 82% increase.

For the season overall, IndyCar is up 10% over last year. It should be noted that last year was up 25% over the previous year, so the trend is continuing upward. For a series that was sliding into obscurity just a few years ago, this is spectacular news. IndyCar racing is working toward being relevant again in the American motorsports landscape.

5. Still One Place Where They Get the Bigger Crowd: So they seem to have the television thing figured out, or at least going in the right direction, now it’s time to work on the crowds in the stands. That is a taller order because in all honestly, all motorsports bodies are battling this one. At the end of the day, it’s pretty cheap to flip on a channel, but it’s a lot bigger of a commitment in a world of ever-rising costs to get someone to pay up and come out to the track.

For IndyCar, there is an extra challenge sometimes because they share a number of facilities with NASCAR. Most of those tracks are cavernous, with so many grandstands and seats, that even if IndyCar draws a decent crowd, it still looks puny on television. Let’s face it, 25 or 30,000 fans at Fontana doesn’t look like much.

However, IndyCar does have one place where they can lay claim to the bigger crowd. The Indianapolis Motor Speedway is still very much the home of IndyCar, and one look at the stands for last weekend’s Brickyard 400 made that clear. It was a complete turnabout, as seats that were filled for the Indy 500 are noticeably empty at the cavernous speedway.

So there you have it. Just a few years ago we were speculating about whether or not IndyCar would even survive and yet here we are today and here are five things INDYCAR officials have every reason to be pretty happy about.