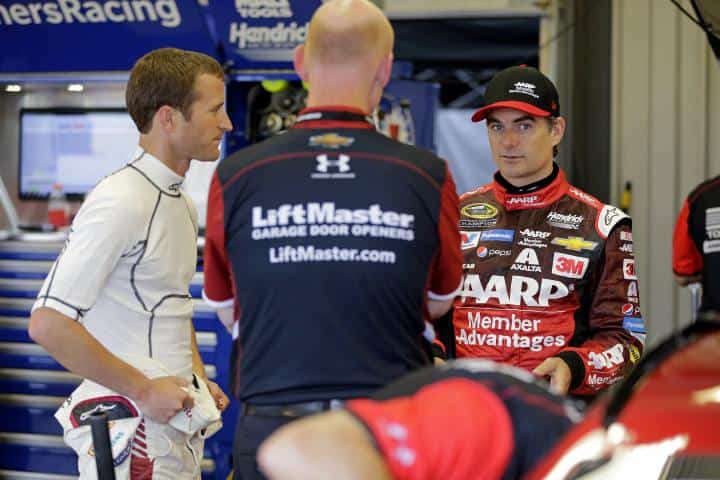 Did You Notice? Jeff Gordon and Kasey Kahne have won Pocono’s August race within the last three years? Both need to recapture this magic while slipping ever closer to the “Chase bubble” the last few weeks. Gordon, 42nd at Indianapolis, hasn’t had a top-five finish since Kansas in May. In his final season, it seems inconceivable he’ll miss the playoffs, but recent results are making that possibility too close for comfort.

Gordon, who now is heading to each track for the final time in his career just doesn’t have the speed of his Hendrick Motorsports counterparts. You wonder, when considering the final seasons of other famous drivers there if the team is already preparing for Chase Elliott’s arrival in 2016. Consider these stats….

One win, fifth in points, replaced by Dale Earnhardt Jr.

In each of those cases, the driver move was expected for months (and in Kahne’s case, years beforehand). With change coming, you can imagine that makes it difficult inside the No. 24 shop as they navigate the impending transition to Elliott. The further Gordon slips away from the title Chase, human nature begins to look naturally toward the future and what’s in store come 2016 and beyond.

I’m not saying this team isn’t giving 110%. Quite the contrary; Gordon wants to go out on a high note in his final season full-time in the sport. But as we’ve seen across all disciplines, star athletes pulling the John Elway routine and going out on top is near impossible. Gordon and crew chief Alan Gustafson have clashed at times in recent months but again, there’s limited chance for improvement. You won’t make a change internally at this point in Gordon’s career because Gustafson will likely be an excellent pairing for Elliott. Why disrupt a team that you want to hand to a rookie almost turnkey?

As for Kahne, bad luck has popped up in four straight finishes of 19th or worse. It’s the same type of awful luck that seemed to dog the driver of the No. 5 car during the duration of his time with Hendrick. What’s somewhat of a concern for Kahne is the next six races are not exactly his best as of late. 13th at Pocono in June, he won the pole at Michigan but faded to 15th the following week. NASCAR’s new aero package there makes that race a complete unknown. In between comes Watkins Glen, a track where Kahne was 12th last year (he’s not really known as a road racer). Bristol? Kahne crashed in the spring and finished a disappointing 37th. Nowhere in there is the type of signature top-five run that puts him up front, earns a win and cements that Chase bid. Atlanta, one of Kahne’s best tracks has been replaced by Darlington now Labor Day weekend so he also doesn’t have that signature intermediate to save him.

The good news for both Kahne and Gordon? Aric Almirola and Paul Menard don’t exactly inspire fear in terms of challengers to their Chase positions. But any DNF or poor performance in this system comes with grave consequences. Both need to be careful and their long-term performance should they make the Chase is currently in doubt.

Did You Notice? Kyle Busch is going for his fourth consecutive win Sunday? Should he do it, he joins Jimmie Johnson as the only other driver to pull that streak off during the Chase era. Johnson, who won four straight during the 2007 Chase went on to win the championship that year.

Prior to Johnson, Gordon won four straight during his 1998 championship season. Gordon, who captured a total of 13 victories this year won the title going away; it wasn’t even close.

Can Busch match those streaks? Pocono’s a place where he’s never won in 21 career starts. Statistically, it’s one of his worst-performing tracks, where he only has four career top-five finishes. Personally, the push Busch is on reminds me of Harry Gant, who won four straight back in 1991 in a quest to run down Dale Earnhardt for the title. Gant never got there, too far behind based on a midseason slump, but made each race in the streak thrilling to watch. I do wonder if Busch is “peaking too soon” – remember, he still remains winless at the Chase tracks of Martinsville and all-important Homestead.

That makes Pocono an all-important test. The three places Busch has won: Kentucky, New Hampshire and Indianapolis are tracks where he’s expected to perform well. Pocono, for all intents and purposes is not. Win there, crown that four-race streak (and with Watkins Glen up next, there’s a good shot for Busch to make it five) and the No. 18 team is suddenly looking like it’s an unstoppable force. We’ve got a long way to go yet until Homestead in November but who would have guessed in March we’d be talking about Busch in this position….

I think at RFR it’s more the cars than the drivers. If you show up at horse race with a donkey, it doesn’t matter who the jockey is. RFR is light years behind the competition. My guess is Greg Biffle is regreting signing that last contract extension. As for Stenhouse and Bayne, they’ve never known anything but mediocrity since moving up full-time to the Sprint cup level, but they have to be frustrated as well. New management is needed at RFR and they need it sooner than later.

The biggest problem right now at Roush Fenway Racing is…Jack Roush. It reminds me a lot of Bobby Bowden in his final years at Florida State. Old, stubborn and hanging on while the rest of the sport has passed him by. It’s time, Jack…

As far as Kyle Busch goes, his biggest impediment to the title may not be any one driver, but the Chase format itself. All it takes is one bad race to sink your chances of advancing to the next round. That being said, I don’t see anyone that can match the pace that he is setting. Maybe Harvick and either or both of the Penske guys can keep up with him up to a point, but none of those drivers have what it takes to be a threat to win on a weekly basis as Kyle has proven to be.

Just about every week you can count on Stenhouse and Bayne to cause a shift in the paradigm that is happening on the track at the time, that is never good. Trevor has been over hyped since the Junebug/Push-me-pull-you cars joined at the hip Daytona win, should have been two trophies handed out that day. He more often than not is a human pinball machine, nice guy or not. Roush doesn’t seem to be concerned about his Cup program, he should be.

Once the hallowed chase begins, isn’t NASCAR going back to the aero package the season began with? None of Kyle’s wins were with that package, right? So, does the performance he’s showing now even apply once the chase starts?
And, yes, something at Roush has got to turn around. I personally do not like my NASCAR without Ford being at least competitive. Outside of Penske’s 2 & 22, Ford is no threat to win anything other than maybe a restrictor plate race.

Now it’s easy to see why Kenseth and Edwards left RFR. They seen and knew what going on in the bowels of that organization. Poor Jack lost control years ago, Perhaps when Fenway came on the scene. Obviously Ford can still be competitive as Penske has proven. Bayne and Steinhouse are just victims of a bad situation. That’s Ditto for Buffalo’s as well. Sad to see a Once powerful team fall to such low state of affairs.

I think if you look at some of the businesses acquired, ventures they added, other things perhaps to consolidate their position with Ford, or at least the business of Ford, its not surprising what has happened.
Nothing to be sad about however, it happens to other businesses every day. Will they be able to turn it around? It remains to be seen. But it looks like that the engine side of the business at least is still in the good graces of Ford.

I can’t feel sorry for Roush. He is after all the guy that asks for way more in sponsorship money than his teams are worth. While other teams are lowering their price when it calls for it, he doesn’t budge. Someone mentioned the word stubborn. That’s an example right there. With a hard line stance like that, I can’t imagine sponsors are lining up to get on his cars. That’s lost cash flow. But he only has himself to blame.