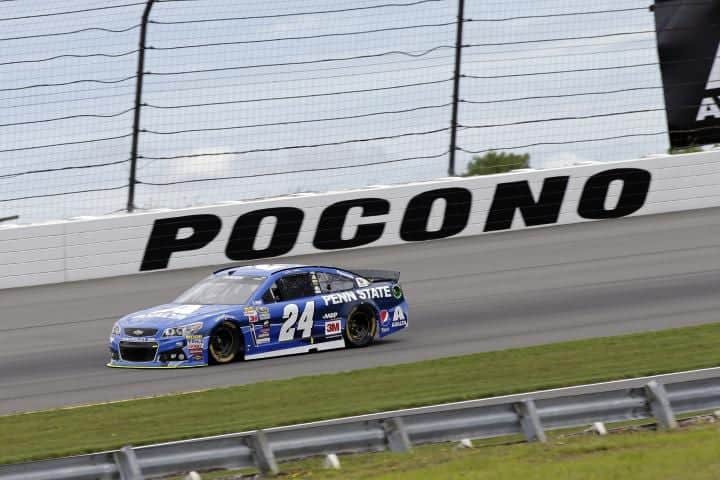 Throughout history, humans have consistently pursued ways to become more interconnected. The expansion of the railways changed the course of U.S. history, allowing travel from coast to coast to happen in days instead of weeks. The Wright Brothers’ first successful flight attempt in 1903 was a critical step toward making the world a much smaller place. Now, over the past decade, it’s social media that has placed the world at one’s finger tips. The social media movement has become so strong that it has forced everything from sports figures to businesses to politicians to embrace the technology or quickly be left behind in the shadows of irrelevancy.

NASCAR is no different and it’s not just the drivers who are involved. Tracks, sponsors, teams and crew members all play a major role in helping the fans feel like they can participate in their favorite sport through the magic of social media.

Pocono Raceway is leading the charge in the social media movement with over 200,000 followers between Facebook and Twitter and the most followed track president in the country, @bigdalsky a.k.a. Brandon Igdalsky. But it wasn’t always that way. In fact just as recently as 2011, Pocono was in the cellar with just 5,000 followers on Facebook, 4,000 more than the number of people following on Twitter. What, or rather who made the difference? Kevin Heaney, director of media relations, who was hired by the track four years ago. The choice could not have been a better fit given Heaney’s history of building a social media presence from the ground up and his history with “The Tricky Triangle.”

“I started working as an intern with Hendrick Motorsports in ’05 and really wasn’t a big fan of the sport at the time,” remembered Heaney. “That experirence showed me how this was the ultimate team sport after watching how 400-500 people are involved in making a team successful. After graduation, I got a job with the Mattioli family, who gave me the opportunity to help with sponsors and assist the ticket office at Pocono.”

It would be a later opportunity at Richard Childress Racing where Heaney would quickly become immersed in the power of social media.

“I was part of the team that started their social media presence,” he recalled. “There were four of us that started it on our own and then people started to follow us because we were tweeting from the track. Then we started team accounts and had the drivers get involved.”

Following his experience at RCR, Heaney would return to the place of his first job as a college graduate in the Pocono mountains of Pennsylvania to work his magic of bringing the venue into the 21st century as director of media relations. The growth did not happen overnight, however, and that was by design.

“We had to first find out what the fans wanted,” Heaney explained. “So when I came in, I suggested we were not going to try and sell fans tickets on social media, which is crazy because that is what we do, we sell tickets to races. But at that time, I wanted to simply focus on interacting with the fans and use social media for one thing and that is to be social.”

Now that Heaney and his team have given the fans what they were looking for as evidenced by their number of followers, they must be kept engaged. Heaney explained that he does not hold back when it comes to expressing what is relevant and interesting.

“Social media is important and it’s fun,” he said. “We find a line and sometimes we cross it. I think we have an unusual voice for a venue of our size. For example, one of our new hires Ricky (Ricky Durst, senior director, marketing and ticketing) responded with a trigonometry equation to someone on Twitter who asked why the Tricky Triangle. We’re a unique sport and entertainment facility, so we have a unique way of chatting with fans. In the end, we’re all about having fun.”

While a lot of effort goes into figuring out what works and what doesn’t with their audience, Heaney has found that it is the simplest things that tend to resonate the most with the fan base. When asked what receives the most reactions or responses, Heaney didn’t hesitate with his response.

“Giveaways and snow photos,” he said. “I don’t understand the snow photos, but it’s popular.”

Just because the team has a clear understanding of what is popular doesn’t mean they rest on their laurels. Heaney is always scheming up ways to engage the Pocono fan base, and, for the most part, random brainstorms have lead to very successful campaigns.

“When we hit 100,000 followers, I came up with a plan to do a giveaway a day for 100 days,” Heaney recalled. “It was the most strenuous thing I’ve ever done. It’s a lot of data and reached about 4.1 million people during the middle of the winter when nothing else was going on in NASCAR.”

Pocono’s famous #WhatTurn4 was born out of a similar light bulb moment by Igdalsky.

“I really saw the power of the hashtag with a Twitter chats two years ago” explained Heaney. “I was on a plane on a random Tuesday night, bored but with internet access. I jumped on to see who was available to chat and 150 responses later, we’re trending with #WhatTurn4 in the U.S. It’s crazy to think that’s even possible.”

Heaney’s latest endeavor involved Periscope, which turned the routine task of parking haulers in June into an international affair.

“I’m having a blast with Periscope, I may never do a Twitter chat again,” said Heaney. “We were talking to people from Istanbul, Australia and Ireland just to name a few places. We reached 2,000 viewers just watching haulers parking for 40 minutes. I was just talking and it was fun.”

When Heaney first joined the Pocono staff, it was in response to the need of having a single person dedicated 100% to social media. In just four short years, one person is no longer enough, and his team has expanded as a result. Kelly Shannon, an intern from East Stroudsburg University, is one of those new team members. Similar to Heaney, Shannon had no prior interest or experience in motorsports, but her time with the raceway has been an eye opener.

“I had worked on a social media project with one of my former professors, who had later reached out to me about this opportunity he had received from Kevin and it all worked out,” Shannon explained. “I’ve done social media stuff before but it was for a smaller company. So, doing the same task for a bigger company like this shows how constant social media is and how much of an instant gratification is for people.”

One of the primary drivers behind the need for extra help is Heaney’s mandate not to miss a single question from a fan.

“Even if you don’t know the answer, I feel that you have to give them something, which Kelly can attest to,”  elaborated Heaney. “You have to find out and get back to them. I want everyone to feel that they walk away from their experience amazed by what we do.”

Check http://t.co/ZYejmxm36k for details! It all takes place in Chalet Village behind the Grandstands near Gate 8. https://t.co/yxUMYKCS8D

Yes, the bumps in Turn 2 have been repaired. https://t.co/F2T2sclPYk

“Race weekend is almost an around the clock job,” he continued.”Kelly spends her first two hours of each day during race weekend simply monitoring everything that is happening and catching up on things that happen overnight.”

The other side of the equation to continuous communication is that instantaneous reactions are often in response to a negative experience as well. For Heaney, he understands that it is part of the game and he makes sure the team prepares accordingly.

“It’s part of human nature,” he admitted. “I’ve done it before. We’d like to make everyone happy, but that’s impossible. If they had a negative experience, I want to hear about it and learn about it. We can’t fix the problems if we don’t hear about it first.”

Having support in the right places makes Heaney’s job a lot easier and that starts at the top with Igdalsky.

“I’ll tell you flat out that I wouldn’t have a job if he didn’t think social media was important.”

However, there are times where having the boss’s support sometimes results in extra work.

“There are times where Brandon will send me a text that simply says ‘whoops,'” Heaney said, laughing. “I know right away that I need to check things out on Twitter because it usually means he just posted something partially controversial. But he is the most followed track president in the country, loves interacting with the fans and it helps me tremendously to have a voice other than the standard press releases.”

While Heaney has an appreciation for what he and his team have accomplished, he always has an eye on the future.

“We need to keep improving,” he explained. “I want to be better with our video content on YouTube. We also need to stay up to date with the trends. As long as we keep putting out great content, we’ll be good.”

While they may have gotten off to a slow start, Pocono Raceway is now one of the social media leaders in NASCAR thanks to Brandon Igdalsky’s vision and Kevin Heaney’s execution. From ticket information to hauler videos to pictures of the snowy frontstretch in the middle of January, Pocono delivers both helpful and interesting content right to the fan’s fingertips.

If not doing so already, fans are encouraged to follow Pocono on Twitter, Facebook, Instagram or even Periscope because you just never know what the next big thing is that Kevin will dream up on a Tuesday evening sitting on the tarmac.