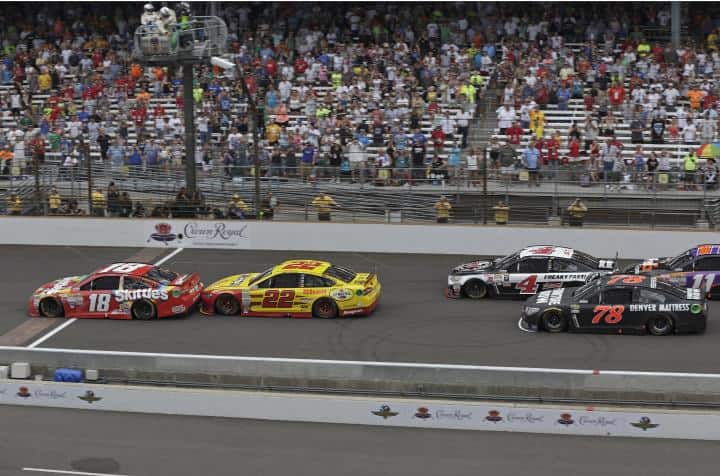 These words uttered by Joey Logano during his post-race interview on Sunday regarding Kyle Busch‘s recent run of wins couldn’t ring truer: “I’m glad he’s back, but geez!”

The driver of the No. 18 Toyota has not only been dominating races these last few weeks, but has also been at the right place at the right time toward the final stretch when it counts. Winning a total of four races now over the last five events is a historic and simply amazing feat that puts him firmly in the record books. The last Sprint Cup Series driver to have such a run was Jimmie Johnson back in the fall of 2007 where he took four in a row, and went on to claim his second Sprint Cup Series championship.

What does this run of late mean for Rowdy’s chance at not only making the Chase but possibly making a serious post-season run at the title this season? That’s still left to be determined, but barring a DNF at Pocono this coming weekend, Busch should be able to gain enough ground in the points standings to propel him to 30th in the standings over the next two races, and thus earn a slot in the top 16 in the Chase. More on Busch’s historic run later…

The run that many had expected to be the fan-favorite storyline of the weekend at Indy, that of Jeff Gordon‘s last run at the famed track, was cut short, as Gordon wrecked on lap 49 of the race. After visiting the pits and eventually his garage stall, work continued on the No. 24 machine, and he was able to get back onto the track. However, the race ultimately ended in disappointment for Gordon after he was forced to head back to the garage at lap 66. At the end of the day on Sunday, the five-time winner at the Brickyard posted his worst career finish at his home track of 42nd. Not the way Gordon wanted to go out at a track he grew up watching the likes of Andretti, Mears and Foyt at as a young boy.

With that, let’s dive into this week’s mailbox questions from you, our readers…

Q: Hey Greg, what are your thoughts on this historic run as of late by Kyle Busch? Will he make it into the Chase, and do you think his winning ways will continue? – Dave H., Deltona, Fla.

A: Hi Dave. When you take a look at what Busch, crew chief Adam Stevens and the No. 18 team have accomplished this season, it’s one of the great comebacks in all of sports right now. The injury aside, we should also take Stevens into account, a rookie in the Sprint Cup Series atop the war wagon for Busch. He had to start off his season coaching and trying to work with two different drivers in David Ragan and young Erik Jones following Busch’s accident at Daytona in February.

I think a lot of this recent success is purely the sheer talent of Busch, a driver who we’ve seen continuously dominate in the Xfinity and Camping World Truck series year after year. His talent has shown but never accumulated as expected in his Sprint Cup Series ride. I think that’s a fair statement, considering Busch is arguably one of the few drivers in the Sprint Cup Series that has always been the bridesmaid never the bride when it’s come down to Chase time. He’s been close many times, but usually runs into a spell of bad luck once the Chase begins.

Outside of Busch’s talent behind the wheel, you have to look at two other factors. One, the solid program that Toyota (TRD) has helped establish for Joe Gibbs Racing over the years. Now with this victory at Indy, Toyota has victories as a manufacturer at every track the Sprint Cup Series currently runs on. Busch has 29 of those wins alone.

Secondly, it’s the perseverance of Busch, the work that he and the No. 18 team led by Adam Stevens have been able to make up for his 11 missed races at the start of this season that has been so incredible to watch. It’s an amazing comeback that will be remembered for years to come.

As a side note, it was announced that Busch will be running the Camping World Truck Series race at Pocono this week in addition to the Cup race. We’ll see if he can pull the sweep for a second straight week.

Q: So when NASCAR brought this new aero package to Indianapolis last weekend, what were they trying to prove? Seemed to me more of the same, and less passing, or challenging for the lead than what we saw for example back at Kentucky a few weeks back. What’s the status of where they go now with this aero package for Pocono and moving forward the rest of the season? – Neal J., Oak Brook, Ill.

A: Neal, thanks for writing. NASCAR wanted to achieve one goal with this new package we saw this past weekend – create more drafting that led to opportunities for passing. That’s really it. The thought was by increasing the drag of the cars, mostly due in part to the massive nine-inch spoiler on the deck lid of the car, the race cars would slow down, punch a larger hole in the air and create more pack racing throughout the race.

Obviously that was an intention that NASCAR has now seen wasn’t fully achieved at IMS. The drivers, all but maybe Busch that is, didn’t really have the most glowing reviews for their racecars after the conclusion of the Brickyard 400 this Sunday. This same aero package is also on the radar to be used by teams for Michigan next month, so we’ll get to see how it improves the competition at a higher-banked track where we’ve seen some of the fastest speeds in the sport recently.

The package that the sanctioning body, drivers and fans really reviewed so highly at Kentucky earlier last month will run again at Darlington, and possibly with other mile-and-a-half tracks during the rest of the schedule, maybe even in the Chase. If that happens, it will create some exciting racing toward the end of the season.

For this coming weekend at Pocono, expect to see the same rules package we’ve seen throughout the majority of the season.

I really think that a lot of the issues in terms of the lack of passing and drafting at Indy can also be blamed on the track layout, a mostly flat, wide rectangular racing surface that was built for open-wheel racing in IndyCar, not bulky NASCAR stock cars. Regardless, this aero situation is something that is priority number one (or close to it) for NASCAR R&D to get right this year. There are more changes to the car, in terms of safety/performance features, and rules for 2016, so getting the aero setup as good as possible this year is huge.

My gosh, I think you nailed it with Kyle Busch’s run right now. Adam Stevens and TRD are playing a role, as is JGR. But the rest is Shrub’s pure talent. Four different race courses, three different aero packages, two previously unseen and tried. Add in what Joey Logano said, “We have been working hard all year to make it all work, and then he just comes back and it works for him.”

You nailed it — Adam Stevens, TRD, JGR have contributed! The win streak would not have been possible without their contributions. But the majority is Shrub’s pure talent. A winning mix.