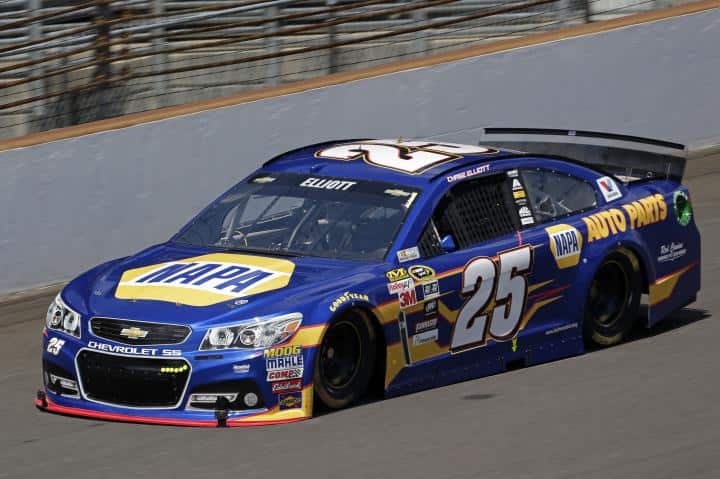 Kasey Kahne put down the steering wheel for a pair of golf clubs on Thursday in Indianapolis. Kahne and some of his buddies went over to the golf course inside (yes, inside!) Indianapolis Motor Speedway to have some fun! The Washington native posted this photo on his Twitter page and it looks like everyone is having a blast!

Big day, officially a private pilot after my check ride this mornin✈️. Looking forward to the weekend, Indy is a special spot!

Chase Elliott began a new milestone in his life on Thursday. Elliott became a licensed private pilot after completing his check ride. His next thing on his agenda? Looking forward to taking the 2.5-mile Indianapolis Motor Speedway in both races this past weekend!

Moments ago a fellas walked up and handed me my fathers 2001 IROC uniform. Quite emotional exchange. Completely floored me. Many thanks.

Dale Earnhardt Jr. received a special gift over the weekend from a fan. Earnhardt received his father’s 2001 IROC uniform. Earnhardt expressed his love over the item on his Twitter page.

Brad Keselowski took some time out of his busy schedule over the weekend as he went over to Lucas Oil Raceway Park to watch his brother participate in Saturday’s ARCA Racing Series race. Brian started the race in 10th and went on to finish 13th when the 200-lap event concluded. Lucas Oil Raceway Park is one track that everyone misses on the NASCAR circuit.

Keep your head up @Blaney. We all lost some. The ones you win will make you forget this one. Can't control some things…

Joey Logano had some encouraging words for his Sprint Cup Series satellite teammate of Ryan Blaney (and teammate in the Xfinity Series) after he lost Saturday’s NASCAR Xfinity Series race in a last lap pass. This right here expresses the true bond of competitors in this sport.

Kyle Busch gained more photo possibilities for family holiday cards over the weekend at Indianapolis. NASCAR posted this photo, which was retweeted by Samantha Busch, of Brexton not wanting to kiss the bricks. It seems that Brexton is a little confused over the matter!

It seems things have been interesting in the Clint Bowyer household. Bowyer posted this photo of his son Cash playing with some of his toys. It seems Cash is starting to grow big and strong just like his daddy! Before too long, he’ll probably be into racing!

The reality Kyle faces each day is terrifying. The struggle. It's real. pic.twitter.com/UGslgiOYlG

Busch has been earning a lot of trophies lately in the world of NASCAR. NASCAR Wonka posted this meme, saying Busch is going to run out of room for all of those trophies soon. Let’s hope everyone takes note and he doesn’t trip over anything!

Kevin and Keelan Harvick are now practicing pit stops, according to this video on Harvick’s Instagram. This is one of the cutest videos you’ll ever see posted from a professional athlete. It’s safe to say, Keelan is following in his father’s footsteps!

@RodneyChilders4 @Outback At this point there has to be a nationwide onion shortage. And you are to blame.

NASCARCasm sent this hilarious tweet to Rodney Childers on Monday. Childers and the No. 4 Sprint Cup Series team finished inside the top 10 and everyone will get a free bloomin onion at Outback Steakhouse with any purchase. Casm posted this tweet, saying there is a national onion shortage. Safe to say, they’ll probably change the promotion for next year!