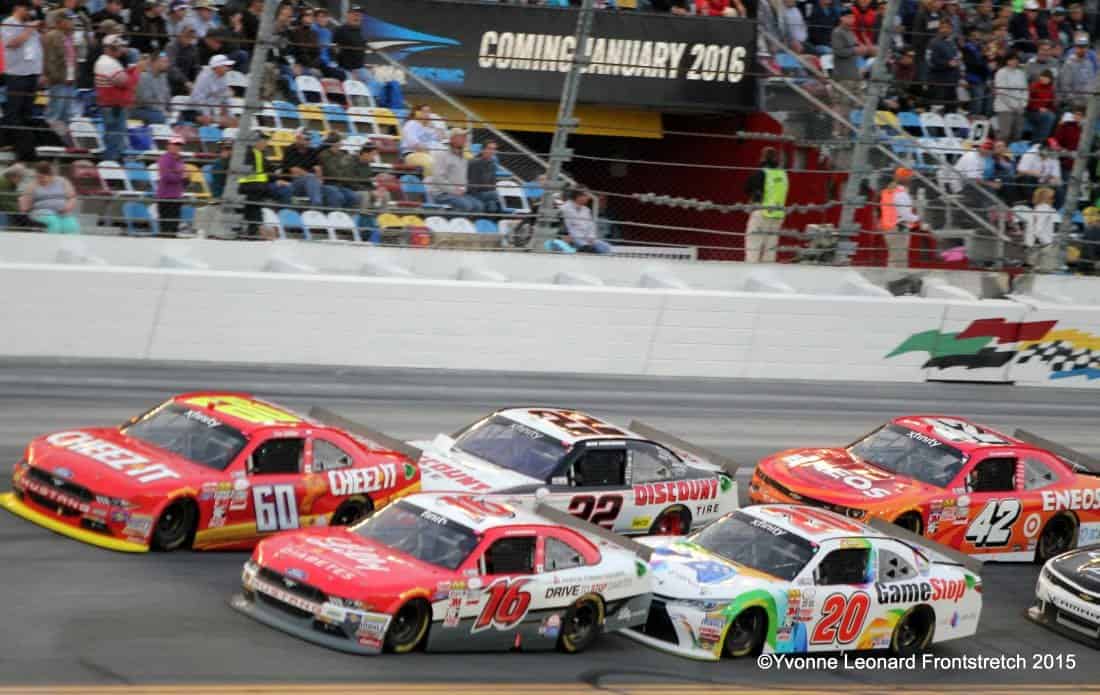 We’re about to enter the 19th race of the season for the Xfinity Series. It seems like just yesterday that the series hit the high banks of Daytona for the season opener.

Heading into Iowa Speedway – one of the few standalone races on the schedule – NASCAR’s second-tier division has itself an intense battle for the championship. Chris Buescher‘s lead has decreased by 11 points over the past two events, and the No. 60 team hasn’t shown much sign of life as of late.

With reigning champion Chase Elliott starting to hit his stride, along with Richard Childress Racing’s Ty Dillon, Buescher is under a lot of pressure to perform throughout the next stretch of events. How have the other teams caught up? Who’s best positioned to succeed as the series enters the homestretch? Now seems the perfect time to stop and evaluate where each team is a little more than halfway through the regular season.

The Chevrolet organization is arguably out-performing JR Motorsports. Austin Dillon‘s three victories have propelled this team, and his teammates are receiving the benefits of it. Ty sits third in points, with Brendan Gaughan and Brian Scott comfortable in the top 10. However, there is a serious problem of inconsistency for those two, and it has basically ruined their chances at a title. Both drivers need victories in order to get back into contention for a top-five position in the standings. But for the younger Dillon, he can still win the championship.

It’s very difficult to rate RFR. The team is like the Cyclone in Coney Island. It’s just so up and down, but there are times when it’s fantastic. Other times, not so much. Buescher is leading the points, which is fantastic, but like he told me at Dover, it’s still early in the year and they don’t want to overthink it. That mentality is the smartest one that Buescher can have, and it should pay off for him.

However, his three teammates are not performing to expectations. Ryan Reed continues to struggle with the exception of the plate tracks. His average finish is two positions higher than it was last year, yet his only top 10 came in his victory at Daytona. Elliott Sadler has started to come on strong in the No. 1 car, earning top fives in three of the last four races. Meanwhile, rookie Darrell Wallace Jr. sits right behind him in the championship standings as the team searches for speed. The season is still better than last year for RFR, leading 262 laps thus far into the year.

The curious case of JRM has two top drivers, who both had crew chief changes over the offseason, contending for a title. Besides leading 114 laps at Iowa, Elliott hasn’t shown the speed he had in 2014. The same can be said about Regan Smith, sitting fourth in the standings with an average finish of nearly 11th. With reigning Cup champion Kevin Harvick driving a third car part-time, the team clearly has speed to win races.

But moving forward, if Elliott and Smith can win a title, they will need to find Victory Lane very soon. There are a lot of question marks about who will fill-in for Elliott in 2016, but if all goes as planned, it will be either Cole Custer or Ben Rhodes. Both are racing part-time for JRM this year (in different divisions), and have sponsors that want to stick with them for the future.

Things could not be going better for JGR. Rookie Daniel Suarez has been driving like a veteran, and leading a few laps at Indianapolis proved just that. The Mexico native has been stout over the past month, moving up to seventh in the championship standings with three straight top fives. Erik Jones is achieving at levels that are indescribable for a teenager, and the fact that he runs so well in the Xfinity Series while running for a title in the Truck Series shows how great he will be in the future.

As far as the team’s Cup drivers are concerned, it is no surprised that they have won quite frequently this year. It would be nice for them to give Drew Herring a shot in the No. 54 car when Jones is away doing a Truck Series even, but the reps are great for him, and competing for wins should help the team contend for an owner’s title.

For a one-car team, Team Penske is on a roll. Leading the owner standings by 48 points ahead of RCR’s No. 33 car, the No. 22’s three-driver combination is nearly perfect this year. They have combined to finish outside of the top 10 just twice this year, winning four events in the process. Ryan Blaney has been impressive every time he has been behind the wheel of the car, and likely will get more reps once the Chase nears. Joey Logano and Brad Keselowski have been outstanding, but no event has been as impressive as Bristol, where Logano led all 300 laps. Through 18 races, the team has 10 top-two finishes. Yeah, 10. To put that into retrospect, only seven drivers have 10 top 10s this year.

HScott Motorsports with Chip Ganassi: B-

It’s been an up-and-down year for the No. 42 team. Brennan Poole has been impressive for someone that signed a deal just weeks prior to the beginning of the season. He’ll crack the top 20 in points after the race at Iowa in his 13th start of the season. His chemistry with crew chief Mike Shiplett is increasing, especially after running four straight contests spanning Chicago until Loudon. Kyle Larson, who has started six races this year, was quite strong in his last two starts (Michigan and Indianapolis). His only top 10 thus far was at Michigan, but he is about to get a lot of seat time in this car, which should lead to him winning a race or two by the end of the year.

The team expanded to three cars over the offseason, and it has hurt the overall performance of the organization. Ross Chastain has been stronger than teammates Landon Cassill and Harrison Rhodes on most occasions, and sits 15th in the standings with two top 10s (both at Daytona). With limited sponsorship coming in for each car, it’ll be difficult to continue on at this rate. However, surviving is something the team does well. After running very well last year, Cassill has an average finish of 23.2, which is 3.4 spots lower than last year. Mechanical issues have really hurt this team, but there is still plenty of time to make the team into one that can compete for top 15s weekly.

JJ Yeley is really impressing in the No. 28 Toyota. There have been some races, such as Talladega and Loudon, where this team is extremely competitive. With a little more work, he can earn a few top 10s by the end of the year at the short tracks. Meanwhile, the organization’s second car – the No. 26 – has seen a plethora of drivers behind the wheel this season. Three Wallaces have driven the second car, along with Ryan Ellis, TJ Bell, Timmy Hill and more. Obviously, losing the money that Eric McClure was bringing in put a financial strain on them, but JGL has survived and is doing well when a driver brings funding to the No. 26 team.

For starters, dropping veteran Mike Bliss for McClure took away a letter from this team right off the bat. Bliss had driven for the team since 2011, and did quite a good job considering his car was painted in white for the majority of the time. Now that Bliss is gone, McClure is back with the organization after ditching them for JGL in the offseason, averaging a finish of 26th in nine events.

The highlight of the organization has been David Starr, who signed a multi-year deal with TriStar prior to the season. He sits 14th in points, finishing inside of the top 20 seven times this season. But even Starr’s luck has been horrific, crashing in three of the past six races. Young drivers Blake Koch and Cale Conley have been consistently around the top 20 for the team. Koch has seen slightly better finishes than Conley, but the two still need to finish in the top 15 more often if they want to get that big break that they have been looking for.

I suspected that this review would be pure fiction so I duct taped my head before I read it. That way, if it explodes I don’t have to crawl around looking for the pieces or try to figure out how to clean up the mess on the ceiling. NASCAR has allowed the Xfinity series to become nothing more than a rather dull final practice for Sunday’s Cup race. It is a stretch to even call it racing. The mock Champion is some poor fool who never wins, at best finishing sixth behind the weekly Cupholes. When a writer buries his head so far up Brian France’s ass it tends to restrict his view. If he were to pull it out and look around he would see that the fans have entirely abandoned the series. This entire article is no more than fiction masquerading fact.

hehe, excellent commentary JQ. You summarized it perfectly and the buffoons running na$car think they’re doing a brilliant job with this mess of a series. Nice crowd at Indy by the way for the busch race, what was there 75 people there?? And this is the only series in all of racing where the “journalists” talk about “owner points” like that means a damn thing to anybody. The only reason that’s brought up is the driver points race is such a mess because the regulars never win a damn thing. So with the cup drivers winning everything in sight adding to their trophy collections and hindenberg sized egos, the regulars settle for scraps and lesser funded teams settle for 25th. What a joke! Oh by the way the truck series should be quite exciting this week. Not! Kyle, Keselowski and Harvick all fight to add to their trophy collection while simultaneously drive fans away from that series as well. Nice job king brian