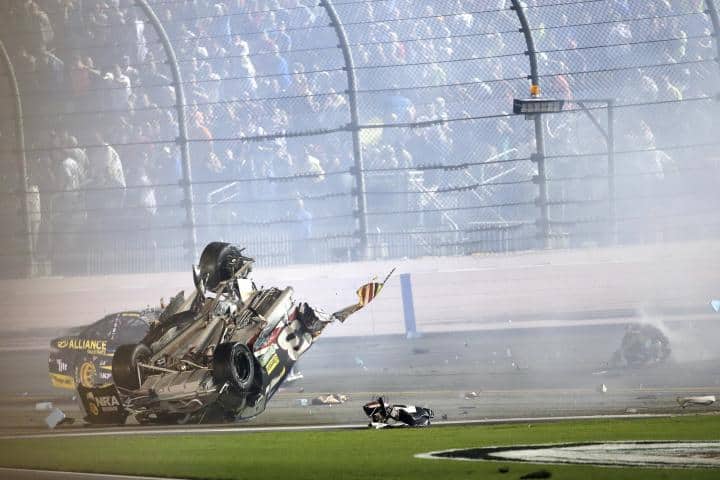 Three months later, in NASCAR’s annual return to the same track, NASCAR Xfinity Series Blake Koch was forced to wait for minutes as safety crews failed to get to his No. 8 Toyota.

Koch, 29, was competing in Saturday’s Lilly Diabetes 250 when he was involved in an incident with teammate David Starr while driving through turns 1 and 2. Koch would slow to a stop again the track’s outside wall while Starr’s car stalled up against the infield tire barrier.

The wreck, while not spectacular, had potential to leave Koch hurt. Yet, much to the chagrin of those in attendance, track safety crew failed to make their way to Koch’s stopped car for upwards of three minutes.

If the incident were a one-time, fluke occurrence, then perhaps NASCAR could be given a mulligan. However, when the incident comes only one week after Alex Bowman was able to get out of his burning car and walk away before crews arrived at New Hampshire Motor Speedway, it can’t be ignored.

NASCAR’s been lucky in regards to safety in recent weeks. Spectacular crashes like Austin Dillon’s flip into the catchfence at Daytona International Speedway have come and gone without major injuries. However, the precedent NASCAR is setting with slow responses to crashes can’t be allowed to continue.

Eventually, NASCAR’s luck is going to run out. While the cars and tracks may be safer than ever, the fact still stands that NASCAR consists of drivers and vehicles roaring around racetracks at upwards of 200 mph.

It might not happen this weekend, or even this year, but eventually, another driver is going to be seriously hurt. When that happens, the speed of the safety crew could be the difference between life and death.

Someone will be seriously injured or worse, and Nascar will be forced to do something about it. Then Nascar will release a press bulletin stating how they have studied the accident and are ‘proactively” taking steps to assure that it doesn’t happen again. Kyle Busch can probably explain how this process works much better than I can.

Much like the HANS device and safer barriers, NASCAR will play “dumb” until someone gets hurt and public opinion forces them to take the next step. I will guarantee that the first time someone dies where the speed of medical attention can be proven a contributing factor, all of the sudden there will be a medical crew.

Remember, with respect to safety, NASCAR is always reactive and never proactive.

All one need do is watch a plate race wondering only when the inevitable “Big one” is coming to know that NASCAR has no genuine interest in driver safety. Cliche to be sure but actions do speak louder than words.

NASCAR still awards pit road and safety crew positions based on their “GOD OL BOY” network. Most of the bodies that are on pit road or safety trucks could pass for the Michelin Man if the suits were pure white. The reason you can eat a snack while waiting for a NASCAR Safety Team to arrive on scene is because they are eating it before they roll.