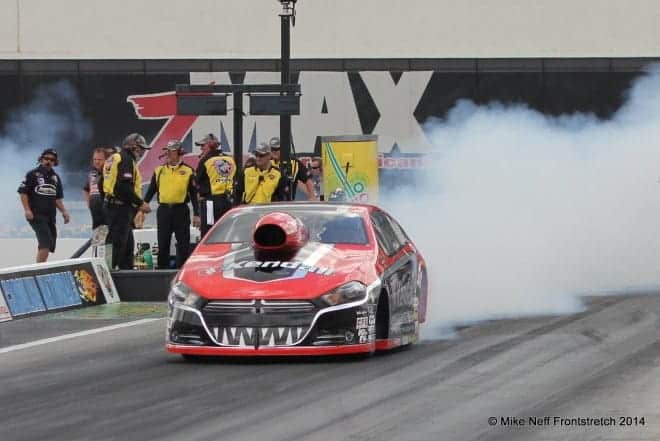 Sometimes things just fall together. Pro Stock report cards were on tap for this week and to go along with it, that’s where the bulk of the news seems to be coming from too. Combine that with stealing the show in the finals last weekend at Denver, and it’s just been a Pro Stock kind of week it seems. So without further ado, let’s look at how the drivers in that category stack up.

Greg Anderson has come back with a vengeance this year after a couple of subpar seasons and is currently locked in a spirited battle for the lead with Erica Enders who looks to defend her title of last year. Obviously they get an A. Good grades also to Jason Line, who, while seemingly a little off compared to his performance in recent years, is still running third, and also to Chris McGaha and the little team that could in fourth. Still looking for that first win though for McGaha.

Ironically it’s Allen Johnson and Larry Morgan, last week’s finalists, who sit somewhat safely in the middle of the pack. Drew Skillman is not making the Western Swing so his position will drop somewhat. Still, for a rookie, he’s not doing bad, although it should be noted he came roaring out of the gate but has cooled off a bit as the season has gone on. Really, though, this guy is just here to learn right now.

One would have to think that Shane and Jonathan Gray, along with Vincent Nobile, who occupy the three final top-10 spots, were hoping for more this season. The good news for the three, however, is there isn’t much pressure from behind. Rodger Brogdon has sold out to Elite Motorsports and left the class. He was sitting 11th. That pretty much leaves V Gaines in 12th as the only one coming up from behind and Jonathan Gray, who sits 10th, has a pretty comfortable 125-point margin over him with just four races left before the Countdown.

Bottom line is it does not look like there will be much drama leading in to the points resent. It does look like there might be a good bit of it at the top though once we get to the Countdown.

Some things most people don’t know about Allen: Johnson held the Pro Stock national record E.T. with that run at Charlotte 1 earlier this year but he only held it for about 10 minutes, as Jason Line beat it two quads later. Easy come, easy go. I wonder though, did they still give him a plaque for holding it for even such a short time?

Earlier this year we saw how Pro Stock drivers shift gears and it was amazing enough what happens in a run of just over six seconds. Funny Cars are even faster and make a run in just about four seconds. This week, Robert Hight stops by to explain how Funny Car gears work.

This past weekend, the Pro Stock final between Johnson and Morgan featured a burndown. So what is a burndown? Let’s start with a quick review of staging. Drivers on the starting line roll first into the prestage beam. You can see when they are prestaged on the Christmas tree when the bottom half of the blue circle on their lane at the top of the tree lights up. From there, they roll a little further into the staged beam, illuminating the other half of the blue circle. Once both drivers have fully staged, the timer for the starting lights on the tree is activated. A quick note, once one driver is fully staged, the other is then on the starter’s clock to complete staging or he will be fouled out for a failure to stage. However, once both drivers have pre-staged, there is no timer or rule that dictates when they must roll in the rest of the way or who must do so first. A little further explanation, the advantage some feel to staging second is a better idea of when the tree will activate because that timer starts off the second car staging.

All this information sets up the scenario we had last weekend in Denver. Johnson prefers to stage second. Morgan knew Johnson had the fastest car all weekend and was looking for any little advantage he could get. He figured his best option was to stage second. Both drivers lined up and prestaged, but neither wanted to be the first to stage. Morgan was well aware Johnson was waiting on him but he had other ideas and was determined to wait as long as it took to force Johnson’s hand, even if it meant running out of gas on the starting line. Over a minute and a half later, Johnson finally blinked and rolled in to finish staging.

The gamble paid off for Morgan as he rolled in second, had the faster reaction time, and in spite of Johnson’s faster car and faster elapsed time, the hole shot win went to Morgan.

One other note to mention on this: the crowd went wild at seeing this unusual tactic play out. If you didn’t see it, you might be thinking “What’s the big deal? They just sat there,” but there really is more to it than that. It was genuinely exciting to watch two veteran, and very stubborn, drivers wage such a fierce battle without even moving!

Don’t just take my word for it though. See it for yourself!

That’s how long the staging battle between Morgan and Johnson in Denver lasted before Johnson finally blinked and rolled into the staging beam. Morgan followed a second or so later and the final elimination finally got underway.

The Western Swing continues on to California this weekend for the NHRA Sonoma Nationals. It’s another Sunday evening show and east coast viewers should be prepared for many sleep Mondays in the office as all the August event broadcasts run until midnight Easter. All the remaining 2015 events are Sunday night shows, but in the case of the west coast races at least, tape delayed coverage is delayed by a lot less from the actual live action.