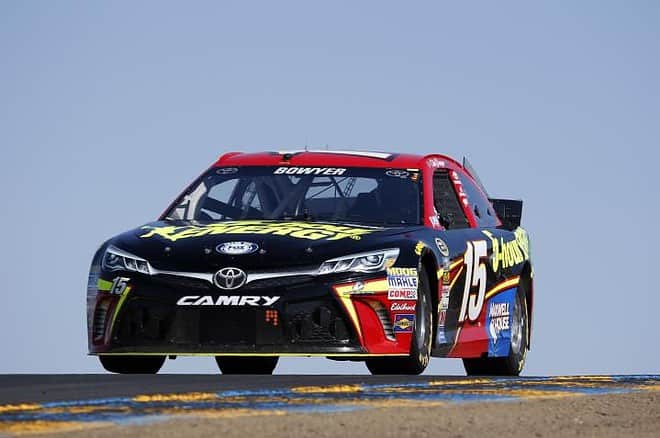 Rob Kauffman has created a domino effect in the NASCAR world within a matter of days. The chairman of the Race Team Alliance (RTA) and co-owner of Michael Waltrip Racing has purchased a minority stake in Chip Ganassi Racing with Felix Sabates.

MWR driver Clint Bowyer is expected to follow Kauffman to Ganassi’s organization, which has fielded two full-time cars for nearly two decades, effective the beginning of the 2016 season. The Kansas native left Richard Childress Racing after receiving a more lucrative offer from MWR in 2012, currently working the first of a new three-year deal with the Toyota organization and sponsor 5-hour Energy.

“This isn’t what any of you guys want,” Bowyer told a group of media members with a large smirk at Pocono Raceway on Friday afternoon, killing off the excitement of a hastily arranged press conference. “You need to bear with us. There is obviously change on the horizon. We got the same [press] release that you guys did… We have to finish this year off strong. There is a lot of work to be done in the future, and we are all working on it so I have something to tell you guys.”

Since early reports came out about Kauffman’s deal with Ganassi there has been speculation as to whether MWR will even exist in 2016. 20 races into the season, Bowyer has one top five and seven top 10s with an average finish of 17.3; he has yet to win, shut out of Victory Lane along with teammate David Ragan.

According to a report from Sports Business Daily earlier this week, Bowyer could take his sponsors with him to Ganassi, forming a three-car Chevrolet team. The future of his former ride, along with that of both CGR and MWR is unknown; details have been scarce to come by.

Sitting 20 points outside of the Chase for the Sprint Cup, the No. 15 team is looking for its third Chase berth with MWR after missing NASCAR’s version of the playoffs in 2014. After the Pocono race in June, MWR moved Bowyer’s crew chief Brian Pattie to Ragan’s No. 55 car. The decision to switch Billy Scott, putting him atop the pit box for Bowyer has paid dividends; they have three top 10s since joining forces.

Now, all of it may be a moot point unless financial backing can be found to keep a faltering MWR afloat.

“My focus is on 2015 and fulfilling the commitment we have made to our partners and Toyota, which is placing our teams in the Chase for the NASCAR Sprint Cup,” said team co-owner Michael Waltrip in a press release Thursday. “There are a lot of details yet to be sorted regarding 2016. I will work closely with Rob Kauffman and our sponsors to formulate the best way forward.”

The future of Ragan’s No. 55 car is just as uncertain than Bowyer. He joined the team at Kansas in May following Brett Moffitt‘s brief role with the team; a sub was needed after Brian Vickers was deemed unable to race for the remainder of the season due to a recurring blood clot. Aaron’s has sponsored a car in the Cup Series for MWR for much of the past decade.

However, the contract with Aaron’s expires at the conclusion of the 2015 season. The company has issued no comment on their future plans.

Kauffman spoke with the media on Saturday morning at Pocono Raceway, discussing the future of MWR. In a brief statement by the No. 55 hauler, he stated that the hope is to create a four-car team in 2016, but it all depends on funding, along with the performance of all four cars in 2015.

“I think it is important to note that Michael and I own Michael Waltrip Racing together,” Kauffman explained. “We’re business partners and great personal friends. What we are really doing is integrating the businesses to create the most competitive product on track and do what is best for our partners. The focus we were trying to get on getting this news out was to get it out of the way because news was bubbling around and refocus everybody on 2015.

“Our plans, whether we have three cars or four cars – two roofs or one roof – have yet to be determined. How we do in the 2015 season will help determine what happens. If we do a great job, that will be one outcome. If we don’t do as great of a job, it will probably be another.”

As he concluded his statement, Kauffman elaborate of the business model of NASCAR, which he said “it is very difficult for teams to maintain a sensible business model.” He also pointed out that the RTA was created to “reorganize the team and focus on improving the business model.” There will likely be a consolidation between the organization, as he hinted, with single-car teams not being affiliated with larger ones.

Joseph started with Fronstretch in Aug. 2014 and worked his way up to become an editor in less than a year. A native of Whitestone, New York, Joseph writes for NASCAR Pole Position magazine as a weekly contributor, along with being a former intern at Newsday and the Times Beacon Record Newspapers, each on Long Island. With a focus on NASCAR, he runs our social media pages and writes the NASCAR Mailbox column, along with other features for the site.
Previous Welcome to NASCAR, Fanatics
Next Travis Pastrana Discusses Possibility of Returning to NASCAR