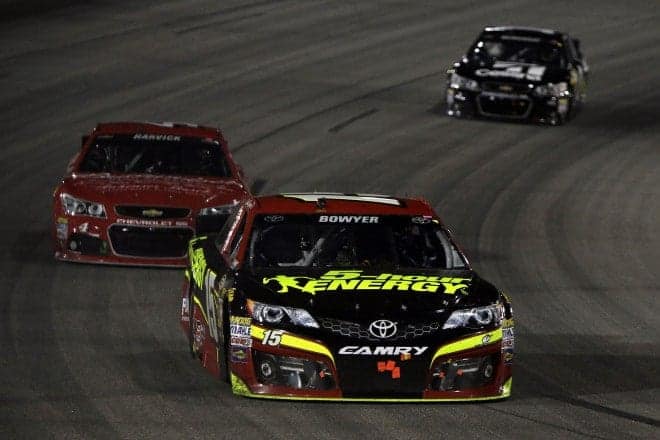 The winds of change are beginning to overtake the NASCAR Sprint Cup Series as the circuit edges closer to the end of the regular season. Rules changes, team changes, ownership changes: no matter what form it takes, novelty has dominated the news cycle in recent weeks.  And now, news of Michael Waltrip Racing co-owner Rob Kauffman’s purchase of an ownership stake in Chip Ganassi Racing has become public.

As the series gets closer to the Chase, Silly Season is inevitably going to heat up, and this Kauffman news is likely to be just the first domino to fall in a much larger set of them. And of course, that’s just the off-track stuff. On-track, the race to the Chase is becoming white-hot, with Kyle Busch edging closer to the top 30 by the week and winless drivers becoming more desperate for a Chase bid.

Pocono Raceway, the site of this week’s race, is poised to exacerbate that energy, and with how quickly news is breaking in Sprint Cup these days, there’s no telling what could happen this weekend

1. Will MWR fall apart in the wake of Kauffman’s departure?

Rob Kauffman, current co-owner of MWR, announced his intentions to buy a stake in CGR earlier this week. Kauffman, who owns 50% of MWR, is one of the richest men in racing and has essentially supported MWR financially since joining the team in late 2007. While it’s not known what the exact plan will be for the two teams going forward, it is generally believed that Kauffman will be taking driver Clint Bowyer, sponsor 5-hour Energy Drink and the assets of the No. 15 team to CGR with him in 2016.

For MWR, a team that has struggled mightily for the past two seasons, this news is undoubtedly going to be a crippling blow to the team. It is entirely possible that MWR will not exist after 2015 as a result of this ownership shakeup. But that’s not exactly groundbreaking news. The real question is what this will do to MWR as the team attempts to put its two cars in the Chase.

Despite all of the commotion that is sure to be underway at MWR headquarters right now, the team’s main mission is to put its two current drivers, Bowyer and David Ragan, into NASCAR’s postseason. Having one or both cars make the Chase could very well be the only thing that saves the team.

In a best-case scenario, a strong performance by MWR either this weekend or on in an upcoming race could attract a buyer to the team and prevent the entire organization from going under.

2. Can Kyle Busch reach the top 30 this Sunday?

As it stands, Busch is sitting only 23 points out of 30th place in the Sprint Cup standings.

Let that sink in. A driver who didn’t even start the season until Charlotte is already knocking on the door of the top 30.

Busch’s run over the past five weeks has been nothing short of remarkable, and everyone in the world of sports seems to be taking notice. Hell, even college basketball analyst Dick Vitale has been following Busch’s recent ascent.

Few, if any, truly believed that Busch would get even one victory prior to the Chase. Now? He has four. One more win, and he’ll have more victories than anyone on the circuit this year.

With Busch likely only needing a top-10 finish to seal the deal this weekend, it seems like this particular question is a foregone conclusion. Justin Allgaier, the driver sitting 30th right now, has not run well at Pocono in the past, and his team has been plagued by mechanical issues all year long.

Are you seeing where I’m going with this?

While everyone in the NASCAR world has been preoccupied with talk of rules changes and Silly Season shakeups, few have taken notice to the Chase bubble, as the winless drivers who are fighting to stay in Chase contention have quietly been waging a war to stay above the cutoff line. And with Busch poised to enter the Chase picture either this week or next week, there are realistically only five spots left to take.

One of the drivers in the midst of that war is Kasey Kahne. Kahne started the 2015 season with a great deal of momentum and floated in and around the top five in points for much of the first quarter of the season. But for whatever reason, Kahne’s performance has absolutely plummeted over the past two months, leaving Kahne 14th in points currently and in danger of falling out of the Chase picture.

What exactly is plaguing the No. 5 team? It’s impossible to know for sure. It’s worth noting that Hendrick Motorsports in general has struggled mightily in recent weeks, but even still, Kahne seems to be even further behind than his teammates are.

Could a return to Pocono be just what the doctor ordered for Kahne and co.? He won this race in 2013 and has generally been strong on the Tricky Triangle in the past. Either way, something will have to change soon, because Kahne could very well fall off of the Chase grid if his fortunes don’t turn around in short order.

Just a little over a month ago, Martin Truex Jr. and his FRR team were on top of the world. They had just won the June Pocono race and were knocking on the door of the lead in the Sprint Cup Series points standings. Life was good, the cars were fast and the No. 78 team looked like a title contender.

Fast forward to this weekend, and the picture does not look quite the same. The very group that looked ready for a championship bid now looks decent at best and hasn’t seriously contended for a win in over six weeks. What gives?

Well, for one thing, the competition has caught up. Back in the halcyon days of early June, the No. 78 group had a decided advantage over the competition. Nowadays? The field has caught up. Joe Gibbs Racing, Stewart-Haas Racing and Team Penske have all caught and passed FRR in terms of raw speed over the past month, and because of the different rules packages used in that timeframe, it’s difficult to tell if FRR still has the chops to produce the speed it had earlier this year.

A return to Pocono should thus be a good barometer of where the team is at. If FRR comes out of the box strong on Sunday and contends for the win at the site of its most recent victory, we’ll know FRR hasn’t lost a step. However, if the team can only produce a sixth-10th place performance, it could be a sign that the team has some work to do before the Chase starts.