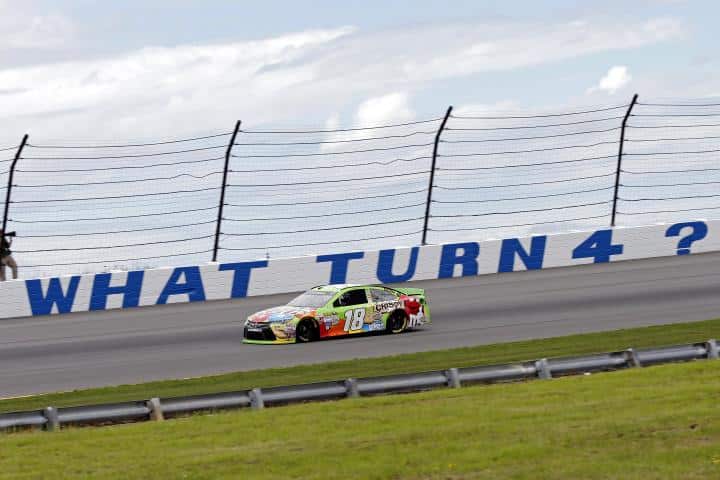 After scoring four wins in the last five races, Kyle Busch earned his first pole of the 2015 season. Pacing around Pocono Raceway with a time of 50.444 seconds (178.416 mph), Busch edged out reigning Sprint Cup Series champion Kevin Harvick and will lead the field to the green flag for Sunday’s Windows 10 400. Since coming back from his injury in mid-May, Busch’s best qualifying effort had been a fourth at Loudon.

“To get the pole here today is cool for me. To me, it is sort of my look back at old-school NASCAR; it puts you in the Busch Clash at Daytona, which is the Sprint Unlimited now. I still look at it the same way. That is just what is cool about getting poles. Once you get one, all you want to do is get more.”

For the first time since Oct. 2014 at Charlotte, Busch was the quickest qualifier. The effort marks eight consecutive seasons with at least one Sprint Cup pole. His lone year without one was in 2007, which was his last season racing for Hendrick Motorsports. Joe Gibbs Racing now has 86 poles in its 24-year history in the Cup Series.

Sophomore driver Austin Dillon qualified fourth at Pocono in his fourth event at the 2.5-mile track. The strong run will be the first time on a non-restrictor plate track this year that the No. 3 car will start inside  the top five. It’s just the third time all season a Richard Childress Racing vehicle is inside the top five on qualifying day at non-plate tracks.

“It felt really good and I felt like we had a car that had a shot at the pole,” said Dillon. “I wish we hadn’t run twice in that second round; we would’ve been even better. It is just so hard to put three corners together here. We have developed our cars and got them better. The bump in turn 2 is a little easier to get over.”

Jeff Gordon will start 10th in his final race at Pocono Raceway. Over the past two races the four-time champion has failed to qualify inside of the top 15. Earlier Friday, track president Brandon Igdalsky handed Gordon a check for $24,000 to go to the Jeff Gordon Children’s Foundation as a parting gift in his final race at the track.

Martin Truex Jr. qualified 13th for Furniture Row Racing. The winner of the June race at Pocono started third that day, leading 97 laps en route to his first victory since June 2013. He has failed to lead any laps since his victory at the “Tricky Triangle.”

Watch Kyle sweep both races this weekend. When you’re hot, you’re hot! I wonder if there has been a surge in Busch tee shirts and diecast sales?

I’m betting not. If NASCAR had a least popular driver award he would stand a very good chance of winning it.

Good call Ken, one down, one to go. I will bet you souvenir sales are up, no doubt!