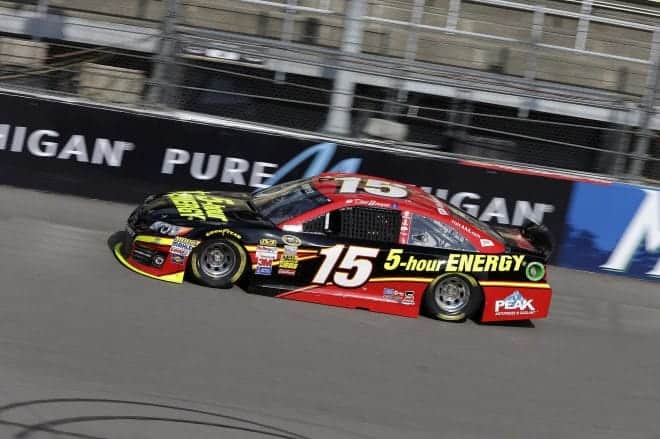 Without a doubt, the week’s biggest news has been the rumored switch of Michael Waltrip Racing from Toyota to Chevrolet. Or a potential partnership with Furniture Row Racing. Or a similar deal with Chip Ganassi Racing. Or for MWR’s majority owner to leave the team altogether. Yeah, it’s been a wide-ranging, gossip-fueled post-Brickyard week.

On Thursday (July 30), it became official: Waltrip’s majority owner has indeed bought a stake in Chip Ganassi Racing with Felix Sabates. What it means for both the Ganassi and Waltrip teams is currently not known, though a statement from MWR assured that both organizations “will continue to operate separately and compete against each other for the remainder of the 2015 season.”

But here’s the question that may be on your mind: who is this majority owner of Michael Waltrip Racing? Just who is Rob Kauffman?

First, a brief history of Michael Waltrip’s namesake racing team. MWR first appeared in the Sprint Cup Series in 2002 on a part-time basis, continuing on that path through 2006, when Waltrip began preparing for full-time status by partnering his No. 55 with Bill Davis Racing. By 2007, the team was its own full-time operation, running three cars with Waltrip, Dale Jarrett and David Reutimann as drivers. The less said about that first season, the better (see: massive amounts of DNQs).

Enter Kauffman. In October 2007, the Connecticut-born businessman purchased a 50% stake in MWR. At the time, a Bloomberg article said that Forbes estimated his worth at $1.8 billion.

“The investment has gone into the business directly,” Kauffman said at the time in an interview. “I’m a car guy from day one, but this is also an economic investment. It’s not a quick flip kind of hedge-fund thing.”

Which was true: Kauffman wasn’t some ordinary investor with only a passing knowledge of automobiles. He owned RK Motors, a Charlotte car showroom with a formidable collection of muscle cars, antiques and more. He was also a racer himself, having since competed in the 24 Hours of LeMans and 24 Hours of Daytona, among other events.

Kauffman’s investment was heralded as a way to provide the means for MWR to move into an era in which it could compete for wins rather than be content with simply making the field at all. It came at a time when outside investments into NASCAR teams was not that uncommon at all; John Fenway had entered into Roush Racing to create Roush Fenway Racing, while George Gillett partnered with Ray Evernham to create Gillett Evernham Motorsports. Then there was the ill-fated Ginn Racing, spearheaded by George Ginn after taking over the former MB2 Motorsports.

Thing is, Kauffman’s entry into MWR truly seemed to work. Reutimann scored the team’s first win in 2009 and followed with another in 2010. Then came Clint Bowyer to the team, resulting in three wins for the No. 15 in 2012 and a runner-up finish in the Chase. Waltrip’s fledgling organization that seemed on the verge of collapse years earlier had finally arrived as bona fide contenders.

Call it a product of someone who knew how to invest their cash. Outside of auto racing, Kauffman worked as an investor and was a founder of Fortress Investment Group, that is until 2012, when he retired.

That’s what makes Kauffman such a substantial player in all this; this is about someone with a hefty sum of cash who’s able to shop around said cash until he finds a business worth investing in. Before now, MWR was the prize. Now, it looks to be CGR, with rumors – though none confirmed just yet – that it’ll mean the end of Kauffman’s involvement with MWR.

How Kauffman’s capital will benefit CGR of course remains to be seen; in fact, it may not be until 2016 that the fruits of the labor are noticeable.

But one thing’s for sure: MWR’s rise from Cup laughingstock to championship contender would not have happened without Kauffman’s involvement. It’s Waltrip’s company in name, but don’t for a second think he was the sole mastermind of the operation. Given that Ganassi’s team already currently places a driver within the top 10 in points with Jamie McMurray, another Kauffman-fueled improvement could shift the Nos. 1 and 42 into quite the contenders right off the bat.

Just wanted to correct that it is John Henry that bought into Roush racing, not John Fenway. Otherwise great article. Thanks

And it was then that Roush seemed to start the downhill slide.

Roush’s slide started after the company started to try and expand its footprint. Acquisitions, new ventures etc. Perhaps the Fenway money facilitated that, but think its not directly related.