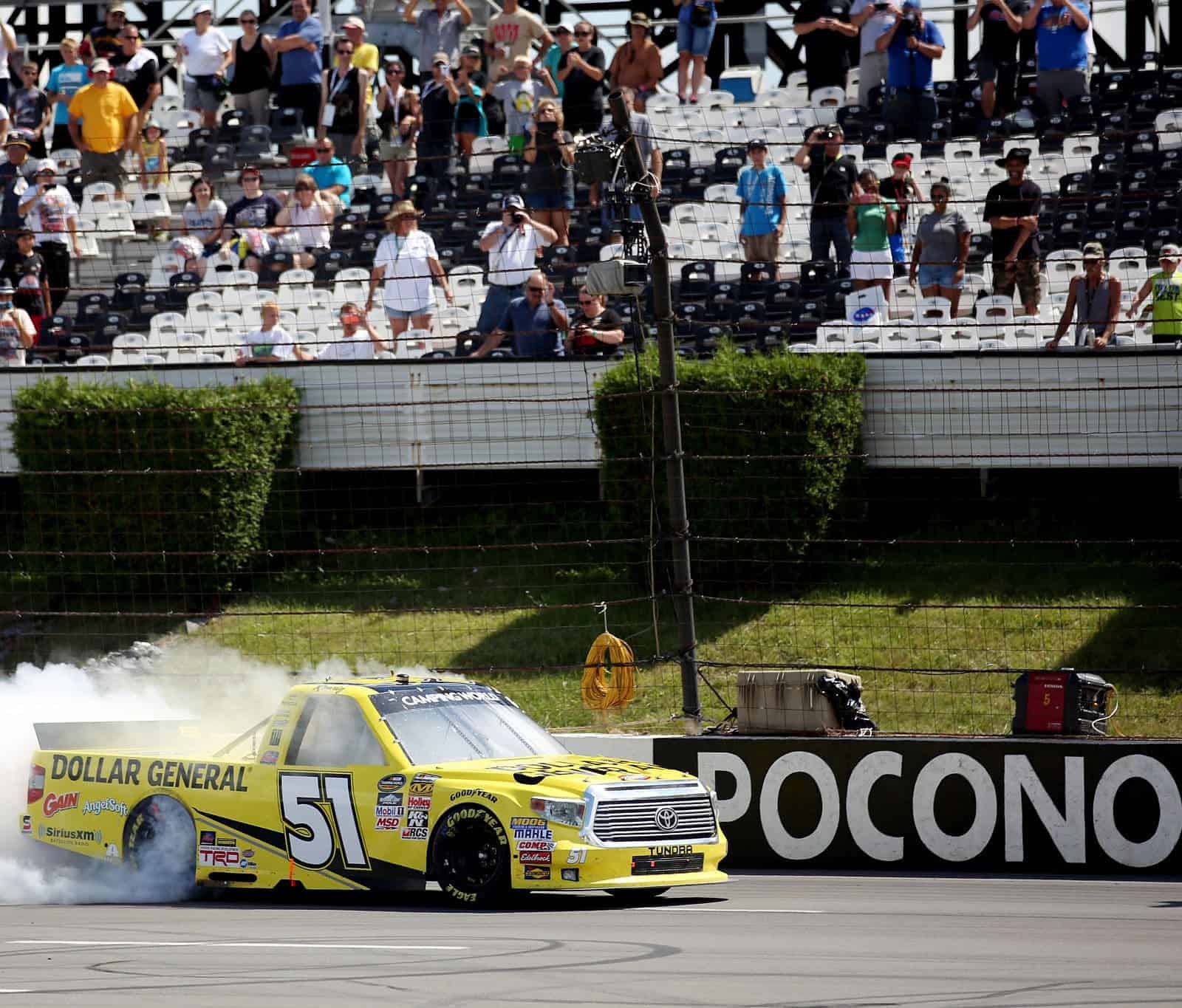 In his return to the NASCAR Camping World Truck Series, Kyle Busch put on a show similar to his recent performances in Xfinity and Cup.

Driving his own Kyle Busch Motorsports Toyota, Busch held off a field of Cup stars and truck regulars on three green-white-checkered runs to win the Pocono Mountains 150 at Pocono Raceway .

Busch, who also has four Sprint Cup victories and two NXS triumphs this season, claimed the win in his first Truck Series start of 2015.

Coming in second behind Busch’s No. 51 Dollar General Toyota was Kevin Harvick. Driving the No. 00 Haas Automation Chevrolet for JR Motorsports, Harvick earned the result in his first NCWTS start since 2013.

Tyler Reddick, Cameron Hayley and Austin Dillon made up the rest of the top five, with Johnny Sauter, Timothy Peters, Matt Tifft, Daniel Hemric and Erik Jones rounding out the top 10.

While he finished 10th, Jones was one of Busch’s toughest competitors. The Michigan native led nine laps on the day and was running toward the front when he was turned around on a restart to bring out the race’s penultimate caution.

The championship battle saw a significant shakeup on lap 6 when points leader Matt Crafton and Brad Keselowski collided while fighting for position on the 2.5-mile “Tricky Triangle”. Keselowski’s day would end with the crash, relegating him to a 30th-place finish. Crafton managed to return to the track for a brief run to jump to to 28th and gain two points.

As a result of the crash and Reddick’s third-place run, the Brad Keselowski Racing driver moved atop the points leaderboard, 11 points ahead of Crafton.

The NASCAR Camping World Truck Series will return to action on Saturday, Aug. 15, when the field heads to Michigan International Speedway for the Careers for Veterans 200 presented by Cooper Standard.

Serious question. Did anyone show up to watch it? Or, is NASCAR the last one to know the Cup World Toyota Series is comatose with little hope for recovery?

Combine predictable racing and the opening of NFL training camps and the result is?

Enjoy the hot streak. The cold streak will last a lot longer.

Impressive. Makes you wonder why Major League Baseball doesn’t routinely scheduled games between the Big club and their Triple A affiliate. Oh yeah, they don’t do that because the outcome is predetermined and nobody would watch it. Sort of like Cupholes in the truck series. Boring.

The race was not available on TV here in Canada. Any streaming on the internet was blocked if your internet service provider was Bell. It was available on Sirius, if you have it, although, there is a rumour that Bell is attempting to get Sirius blocked here too. (For the record, Bell Media controls 75% of all media content in Canada and is trying to gain control of ALL media, and their CEO is a close, personal friend of our Prime Minister).

Hearing that the race was dominated by two Cup drivers makes me glad I didn’t waste my time listening to it (I subscribe to Sirius). Add too that Toyota has absolutely decimated the competition since entering the series in 2004, and successfully drove out two manufacturers (Ford and Dodge), I wonder how long it will be before Chevrolet tells King Brian to take his third tier series and park it where the sun can’t shine. And when that happens, the series will hopefully fold.

As for someone’s comment about training camps, I guess I must be in a very small minority, as I hate football with a passion, and don’t give a rat’s droppings about any training camps! I’ve tried watching football, but I just don’t understand the appeal of watching a bunch of Neanderthals with sub-standard aptitude bashing their heads together, just to move a piece of inflated leather up and down a field that would best be served if it was turned into a condo development! But then, I feel that way about any sport that is played with a ball (and stick).