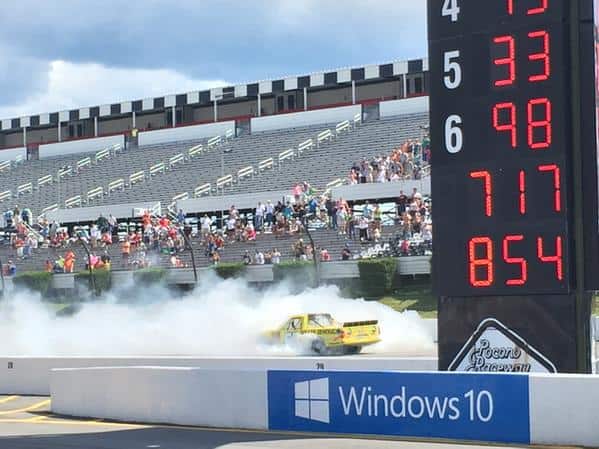 In a Nutshell: Wild restarts, pit strategy and high speeds controlled Pocono Raceway on Saturday afternoon for one of the shortest races on the NASCAR Camping World Truck Series schedule. Kyle Busch dominated at the “tricky triangle,” leading 53 of 69 laps in his first Truck Series race of the season in his self-owned No. 51 Toyota Tundra. With a plethora of cautions near the conclusion of the race, Busch held off a hard-charging Kevin Harvick in a green-white-checkered finish. Tyler Reddick finished third, followed by rookie Cameron Hayley capturing a career-best finish in fourth and Austin Dillon rounding out the top five.

Who Should Have Won: Busch was the favorite coming into the race, even though he had not run an event in the Truck Series this season. Dominating at Pocono, the only driver that could contend with him was teammate Erik Jones, who wrecked late in the race, finishing 10th. As Busch pulled away on the final restart, he drove his way into winning at least one race in all three of NASCAR’s premier divisions for the 10th season in his career.

It took only five laps for the first incident on the day. Matt Crafton was running in the top five when Brad Keselowski and he made contact in turn 3. The two hit hard, causing both of them to go straight to the garage.

The 2012 Cup Series champion was competing in his fourth Truck Series contest of the year and looking for his second career victory in the division. Racing for Brad Keselowski Racing, his driver/teammate Reddick came into Pocono trailing Crafton by 14 points in the championship standings. When the two got together, it led to a 28th-place finish for Crafton, his first outside of the top 25 since Gateway in June 2014.

Don't think anyone is happy with 2 wrecked trucks.

Appreciate the efforts @TeamBKR
we will keep trying…

Crafton now sits 11 points behind Reddick in the championship standings – a 25-point turnaround. The two-time reigning champion has a career-high four victories this season, along with 421 laps led. However, his second finish outside of the top 20 put significant damage to his title hopes as the series is in the midst of the second half of the season.

“That’s your Cup champion,” Crafton told MRN following the incident. “That’s pretty much an idiot right there. I guess maybe that’s the way he (Keselowski) wants the [No.] 19 truck (Reddick) to win the championship. But they’ve got a long way to come right now, I’m telling you that.”

The two confronted each other in the Truck Series garage area, and were clearly not pleased. Keselowski only has a handful of events remaining for the No. 29 truck for the remainder of the year.

No. of Rookies in the Race: The usual eight rookies were in the event, which includes the same suspects in the hunt for Rookie of the Year.

Rookie of the Race: Hayley, finished fourth after contending for the lead on the final restart.

Crafton lost his title lead to Reddick after his incident. Reddick finished the day in third, which puts him 11 points ahead of Crafton. Jones stayed in third, 16 points behind Reddick.

Johnny Sauter is fourth in points, followed by Hayley. Townley dropped a position after being involved in a wreck late in the race, finishing 17th. Hemric, Timothy Peters, Gallagher and Ben Kennedy round out the top 10.

“To me, anytime I get in a vehicle, I want to get in Victory Lane. I knew I was going to race a few of them. I was supposed to race Charlotte, but it wasn’t going to be a smart move to make that one just after my return to the Cup car. I had to put Jerry (Baxter, crew chief) on the back burner for a little longer until we got here to Pocono. It has been fun to be on the sidelines and watch our team excelling. We have had some really fast trucks this year. We have just had a little bit of bad luck. Erik Jones again today had some bad luck. It is good to see Christopher Bell win a race, Jones has won a race, so all three teams have been in Victory Lane this year. We’d certainly like to make it more of a weekly occurrence.

“We were entering turn 3 and next thing I knew, it looks like he went straight into the corner and we made contact. I was just trying to get in line behind him. The last thing I want to do is wreck the point leader. I feel bad for Matt and his team. I have no interest coming into the Truck series to wreck someone on purpose. The last thing I want to do is go out and wreck them. I want our team to go out and earn it. I have no interest in wrecking someone intentionally and that’s not what happened.” – Brad Keselowski, finished 30th

“It’s just another race and another day. You move on and leave it in the past. Racecar drivers try to have pretty short memories. I’ll get over it on my way down [to Iowa]. When I get in the other car, it’ll be just like any other race weekend.” – Erik Jones, finished 10th

“When you got Cup drivers all around you, you learn a lot on that last restart. These restarts are just so difficult, especially at Pocono on these long straightaways. I think I did what I needed to do. We didn’t stay up in second like I wanted to, but that is a really cool thing for me. I think it’s all about what I learned today. I got a top five. I think my crew chief and I really understood what the truck did today. We just need to progress and just focus on what we need to do as a team.” – Cameron Hayley, finished fourth

Nice! Cup interloper who could care less about points or a championship takes out the points leader. Another reason Cup drivers need to stay out of the lower series. I can’t imagine Crafton or his team is too happy about it, but I’m sure the media, much like this article, will just blow it off like its no big deal because it was Kes that did it.