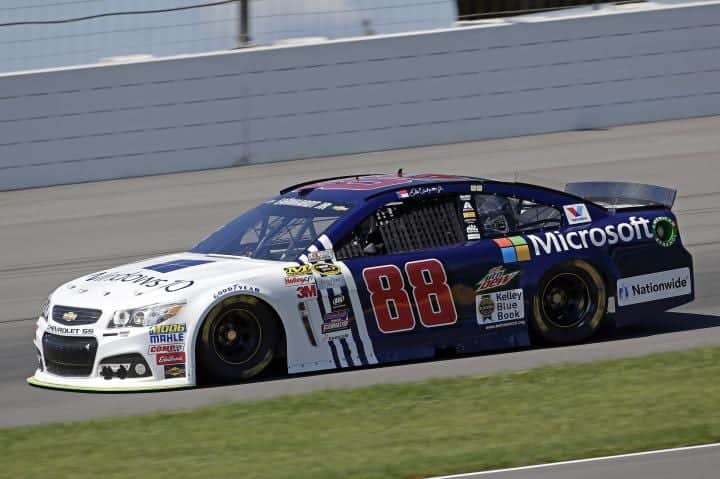 It was a wild day at Pocono Raceway. With fuel strategy, eight cautions and even a red flag, it wasn’t your average race at the “tricky triangle.”

Unlike 2014, the brooms didn’t come out this year. Dale Earnhardt Jr., who swept the events last season, came close to earning his third victory of the year. However, after nearly crashing out of the race, he survived the first-half chaos to provide his Hendrick Motorsports team its 11th top five of the season.

Earnhardt was hit by Cole Whitt on lap 71, but didn’t hit anything. After the race went back to the green flag with just over 80 laps remaining, he was halted outside of the top 25 until the final stretch, which lasted for over 60 laps.

“We got behind and could never really get our track position back,” said Earnhardt following the race. “I must have came down on Cole Whitt in turn 1. I didn’t think I had anyone underneath me heading down into the corner. We got a little damage, fixed that and we got back out. We ran good lap times throughout the day. We were running really good laps until a vibration kicked in.

“I would’ve been more disappointed if we finished 19th, so we’ll take it. It was like some of the older races where you can’t count on them to throw cautions and they didn’t today. We always get late yellows, and I was really surprised we didn’t get any.”

As the leaders began to pit for fuel, along with some running out of gas, Earnhardt piloting his No. 88 Chevrolet near the front of the field. With Windows 10 as his primary sponsor and the title company of the 400-mile event, he expected to contend for a win until the incident with Whitt.

Earnhardt now has 11 top fives on the season, which is third behind championship leaders Kevin Harvick and Joey Logano. Following last weekend’s race at Indianapolis, where no HMS cars finished inside of the top 10, the organization had three drivers inside of the top portion of the field.