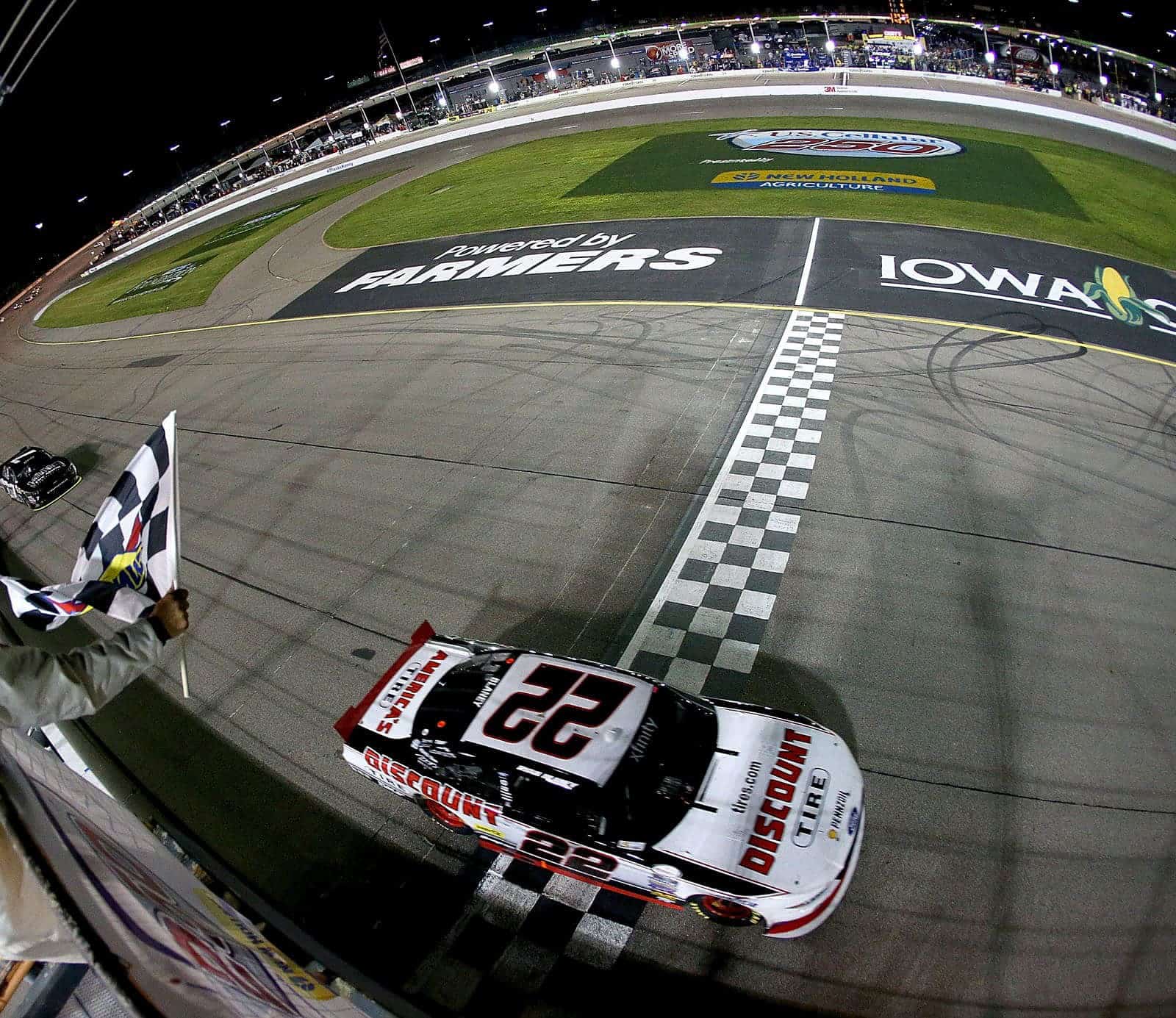 After a mistake last week that cost Team Penske’s No. 22 Discount Tire team a victory at the Brickyard, Ryan Blaney said that it was the driver’s fault. Well, he certainly made it up for it Saturday night at Iowa Speedway, leading 252 laps in a race that was only supposed to have 250 (two green-white-checkered attempts) and scoring his first Xfinity Series victory of the season.

The victory for Blaney, his third career win, did not come easy for him. The 21-year-old had to endure six restarts in the final 50 laps, including two GWC attempts. The multiple restarts were not kind to many drivers, including Darrell Wallace Jr., Brennan Poole and Ben Rhodes, who all spun out late in the race. Poole’s spin brought out the eighth and final caution of the race and set up the final GWC, in which Blaney held off veteran Regan Smith for the victory. Smith’s second place finish is his best finish of the season.

It was a great outing for Richard Childress Racing, with its three full time entries finishing in the top five. Brian Scott piloted his No. 2 Chevrolet to a third-place finish. Brendan Gaughan, who came up a half a car-length short from clearing Blaney for the lead on a late-race restart, finished fifth. Ty Dillon finished fourth and picked up valuable points in the championship race.

The night, however was not good for Chris Buescher who came into the race as the points leader. Buescher made contact with his teammate Wallace Jr., causing his rookie companion at Roush Fenway Racing to spin out and bring out the seventh caution. After the race, Darrell found the No. 60 on pit road and had very few nice things to say. Buescher would finish the race in 13th with a decreased points lead.

Chase Elliott, who started the night as the second-place points man, turned what could have been a big negative into a solid performance. Elliott wrecked after being forced into the wall by Brandon Jones with less than 30 laps remaining. Elliott came back to end the race in ninth place, and decreased his points deficit to Buescher to only 20.

Daniel Suarez and Erik Jones both came back from adversity to record sixth and seventh-place finishes for Joe Gibbs Racing. Suarez battled back from a shredded right-front tire early in the race, while Jones was spun coming into pit road under caution when he inside the top five. Elliott Sadler made contact with JR Motorsports’ Rhodes and turned him into the inside wall late but finished in the eighth spot. Ross Chastain finished 10th and was greet with a “congratulatory” shove on pit road by Ryan Reed. Reed, who finished 19th, was upset with Chastain after he forced Reed into the wall on the final restart.

With the top three in the championship battle being separated by only 21 points, the Xfinity Series will start its road-course swing next week with the Zippo 200 at Watkins Glen International, Saturday, August 8th at 3:00 p.m. ET on NBCSN.

The race last night proved three points. One, Blaney is the real deal, and I hope Roger has this kid locked in, or someone (Hendrick) will steal him away. Two, despite a car dominating as Blaney’s car did, an Xfinity race can be exciting without Cup drivers trying to inflate their already oversized egos coming in and stinking up the show. And three, this is the perfect solution to the garbage racing we saw last weekend. Judging by the crowd last night, it looked about the same numbers as what was at Indy for the 400, so why not drop the Brickyard completely, and move the Cup race to Iowa?

But, wait, there were no Cup drivers in the race? And the crowd was about average? Can’t be. Cup drivers are ruining the Busch series ( I refuse to call it something else). Explain yourselves?

That said, I was very happy to see Blaney get the win. Really like the kid and hope for great things for him in the future. Hated seeing him dump the win at Indy but, he learned a valuable lesson for his future career.

So, yeah, it was a whole bunch of things that really helped me on that last restart. JEREMY BULLINS CONTINUED – WERE YOU GETTING EVERYTHING YOU COULD THE FINAL 30 LAPS?