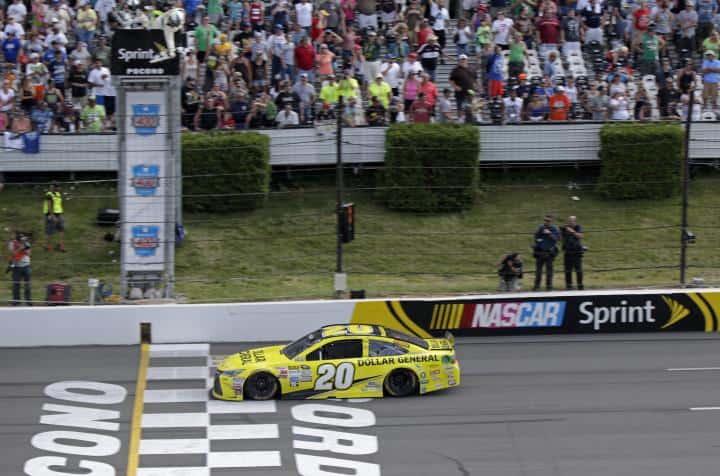 A bizarre day at Pocono Raceway concluded with Matt Kenseth taking the checkered flag in the Windows 10 400 as nearly the entire field ran their gas tanks dry and were forced to pit road late in the going.

For Kenseth and his No. 20 team, the thrilling victory was his first at Pocono, second of 2015 and the fourth straight win for Joe Gibbs Racing.

“There’s nothing like wins,” said Kenseth in a post-race press conference. “In the end, we came out, ran three or four laps and Jason (Ratcliff, crew chief) told me I have to save a little bit so I started real early.

Before the stirring pit strategy shakedown took place in the closing laps, it was Kyle Busch chasing Joey Logano for the race lead. It was a game of who could last the longest on their tank of fuel.

“That’s hard – to not go as fast as you can in those last five or six laps,” Kenseth said. “It was tough to discipline yourself to do that.”

As the leader, Logano, slowed with two laps remaining, the lead went to Busch, who came into the “tricky triangle” looking to grab a fourth straight win. The glory was short-lived for Busch as he ran out of gas on the last lap.

Logano would be forced to pit on the last lap – suffering a pit-road speed violation on top of it – to finish a disappointing 20th.

“I thought I was going to be good [on fuel],” said Logano, who led a race-high 97 laps. “And then I started running out and knew we weren’t going to make it. It was tough. We did everything right today.”

The beneficiaries included Brad Keselowski and Jeff Gordon, two drivers who lacked the competitive speed to battle for the top spot on Sunday. Gordon grabbed his third top-five finish of his 2015 season, finishing third.

“We played the fuel mileage strategy pretty early on and that lost us track position,” said Gordon. “I thought we were trying to get maybe 10th or 12th and all of a sudden, they said you’re third. I was probably the most shocked person out there on the race track when I found that out.”

For Gordon, it was a farewell event as he made his final start at the track he conquered six times in his 46 starts.

“This is definitely going to lift us back up,” said Gordon.

Keselowski ran into trouble, literally, as he collided with two crew members during a pit stop before the halfway point.

Skipping through a spin by Dale Earnhardt Jr. on lap 73, Keselowski survived the fuel mayhem to come home second.

“Unfortunately, just another race where I kind of feel like it didn’t all come together for us,” said Keselowski. “It was nice to have a race like this that stayed green for so long at the end. That’s enjoyable to me, to let the racing kind of play out on the racetrack and not necessarily on pit road or restarts, and we saw that today.”

Other notables who came home with happy results were Earnhardt Jr. in fourth, Greg Biffle in fifth, AJ Allmendinger getting his third top 10 of 2015 in seventh, Tony Stewart in ninth and Landon Cassill finishing 14th for his No. 40 team.

The race saw some of the oddest moments of the season with the race being red flagged for more than 14 minutes after Kasey Kahne slammed into the pit lane wall on lap 4 – with no injuries to Kahne or crew members.

Among the seven caution flags that occurred by halfway was a blown motor by Kevin Harvick on lap 21 .

Another odd moment hit Trevor Bayne’s No. 6 Ford as a pipe flew into the car’s radiator. The day was done and Bayne finished 40th.

The 400 miles of Pocono racing saw 18 lead changes among 13 drivers.