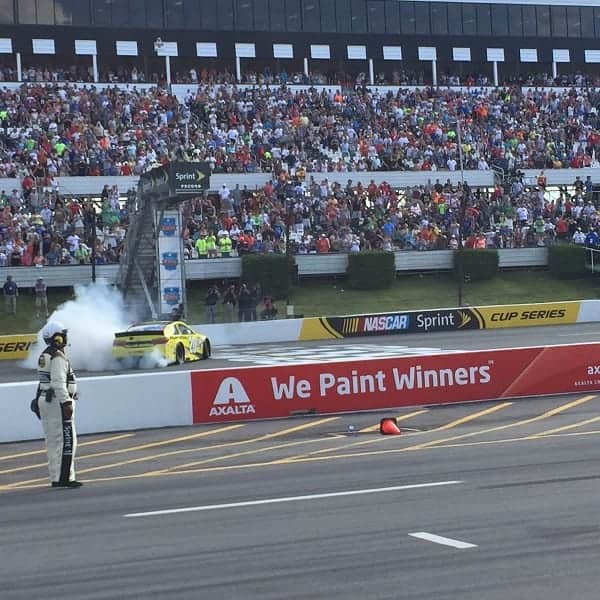 It’s never happened before. Never. Don’t even try to figure it out, especially since it just has never occurred.

Matt Kenseth has won a fuel-mileage race. It took 18 seasons for the Wisconsin native to earn a victory when everyone falls out of the race due to a lack of gas, but Sunday’s Windows 10 400 was quite different. Yeah, even he was surprised by it.

Holding off Brad Keselowski by nine seconds – a driver that has won multiple fuel-strategy races – the No. 20 team earned its second victory of the season, leading the only two laps that will go in the record books.

Joe Gibbs Racing now has eight triumphs in 2015, which is the most for a single organization through 21 races, with Hendrick Motorsports trailing them at six victories. In all of 2014, the Gibbs team combined for two wins – one each by Kyle Busch and Denny Hamlin. However, the difference this season is the addition of another car, giving JGR four teams in 2015.

Kenseth now has nine seasons with multiple victories throughout his career. With his second multi-win year in three seasons with JGR, he is in contention for a championship once again as crew chief Jason Ratcliff and he are now back in the hunt after using strategy to get into Victory Lane once again.

With three of the four cars locked into the Chase, the focus is now turning toward NASCAR’s version of the playoffs. The lone driver from the team that isn’t locked in is Busch, who sits a mere 13 markers behind the 30th-place cutoff to make the Chase following Pocono. But the differential for the entire organization is outstanding compared to 2014, and Kenseth believes the best has yet to come.

“There is nothing different with the team really,” Kenseth said in a post-race press conference. “It is the same group of guys at Joe Gibbs Racing. Of course, we added a team so we added a lot of new people. We just got behind last year and spent the fall catching up and tooling-up for the fourth team. Coach will tell you that was a big deal.”

The four cars are working closely together this year, and adding Carl Edwards has also been a plus for the organization. Kenseth’s former teammate at Roush Fenway Racing has a win this season at Charlotte along with five top 10s and sits 16th in the standings. The results might not show it, but Edwards is starting to have as much speed as his three teammates, which is a key to Kenseth’s success as of late.

“Getting Carl acclimated has helped. Finally, getting Kyle back has been a big boost to us all. Getting him back has elevated our game. Right now, everyone is working really well together and everybody is building us really good stuff. Nobody was happy with our season last year. As late as March, coach was still yelling at us in meetings, and every since he yelled at us at that last meeting, we have all been running a lot better.”

The unexpected victory gives Kenseth momentum heading into the final stretch of the regular season. His win at Bristol was a step in the right direction, but the triumph at Pocono solidified his ability to contend for a title.

Well a win is a win, but damn 2 laps..yup he earned that one. (Sarcasm) I remember Kes got a win by a fuel mileage blunder, you would think he committed a murder, Matt does it and he “earned” it and is a saint. Come on people, 3 drivers including Logano leading the most laps (97) lost fuel, Matt lucked into that one big time. Funny stuff. Just saying. At least Brad admitted he won it because he got lucky. Crickets…And now we have to hear all about Toyotas, like Matt was a “force” all day. Don’t think so. Again just saying. Love the spin…. :)

I don’t know about you but I’m pretty jealous. I wish I could watch the exciting races the Frontstretch staff sees instead of the clone parades broadcast on TV!

Well it was nice to see the return of the standard 2015 style of racing which we’ve come to know and love. (LOL)

Turned it on at lap 24 just to see if anyone showed up to watch. Saw 43 cars single file and as evenly spaced as a Catholic school lunch line. Turned it off.

I turned the race on, and thought I was watching “The We-Love-Kyle Busch Show”, so I turned the channel and watched the Indy Car race from Mid-Ohio. A better race overall!

Speaking of Indy Car, I see they have their own version of Kyle Busch (and Eric Jones). His name is Sage Karam, a young guy who think’s he’s God’s gift to Indy Car racing!