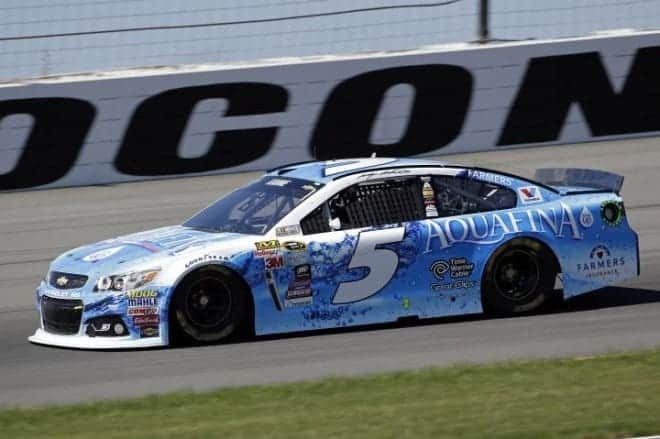 It’s been a rough weekend for drivers coming out of turn 3 at Pocono Raceway. The pit wall, which is made of steel, has been slammed into three times at the 2.5-mile triangular-shaped speedway.

Kasey Kahne, a two-time winner at Pocono, pancaked the wall near the pit road entrance on lap 3. As his No. 5 Chevrolet got loose coming off the corner, he spun onto pit road, which sent him right into the wall.

“I got just got loose really late so far off the corner, not sure why or what happened,” Kahne said after the wreck. “You are so far off the corner that it is a slow slide so far down pit road. I never ended up in there and I don’t know why that was. I couldn’t believe it when the No. 26 [Jeb Burton] did it earlier this weekend.”

Kahne entered Sunday’s Windows 10 400 14th in the championship standings, which was on the border of making the Chase for the Sprint Cup. After finishing 19th and 25th, respectively, in the last two races at Loudon and Indianapolis, he has 559 points. At the time of the accident, he remained 14th in the standings, but could potentially fall out of the Chase bubble after the race depending on who wins.

The wrecked caused a 14-minute, 43-second red flag to repair the wall. No fans, crew members or safety workers were injured in the wreck. A helmet that was sitting on pit wall was sent flying approximately 25-30 feet, according to NBC’s Dustin Long.

#NASCAR … I'm told by eyewitness that one helmet flew more than 20-25 feet behind pit stall in that incident. @NASCARonNBC @NBCSports

As Kahne mentioned, Burton slammed into the pit wall during Saturday’s first practice session. His car was destroyed in the accident, and was forced to go to a backup car following the wreck. A piece of his car was stuck in the wall, which caused a lengthy delay similar to Sunday’s wreck. Camping World Truck Series driver Ray Black Jr. also had a similar hit during Saturday’s event at Pocono.

“It’s really bad for the points,” Kahne explained. “It’s bad for our team to lose a car quickly in this race. The last month has been really bad. I just lost it and spun.”