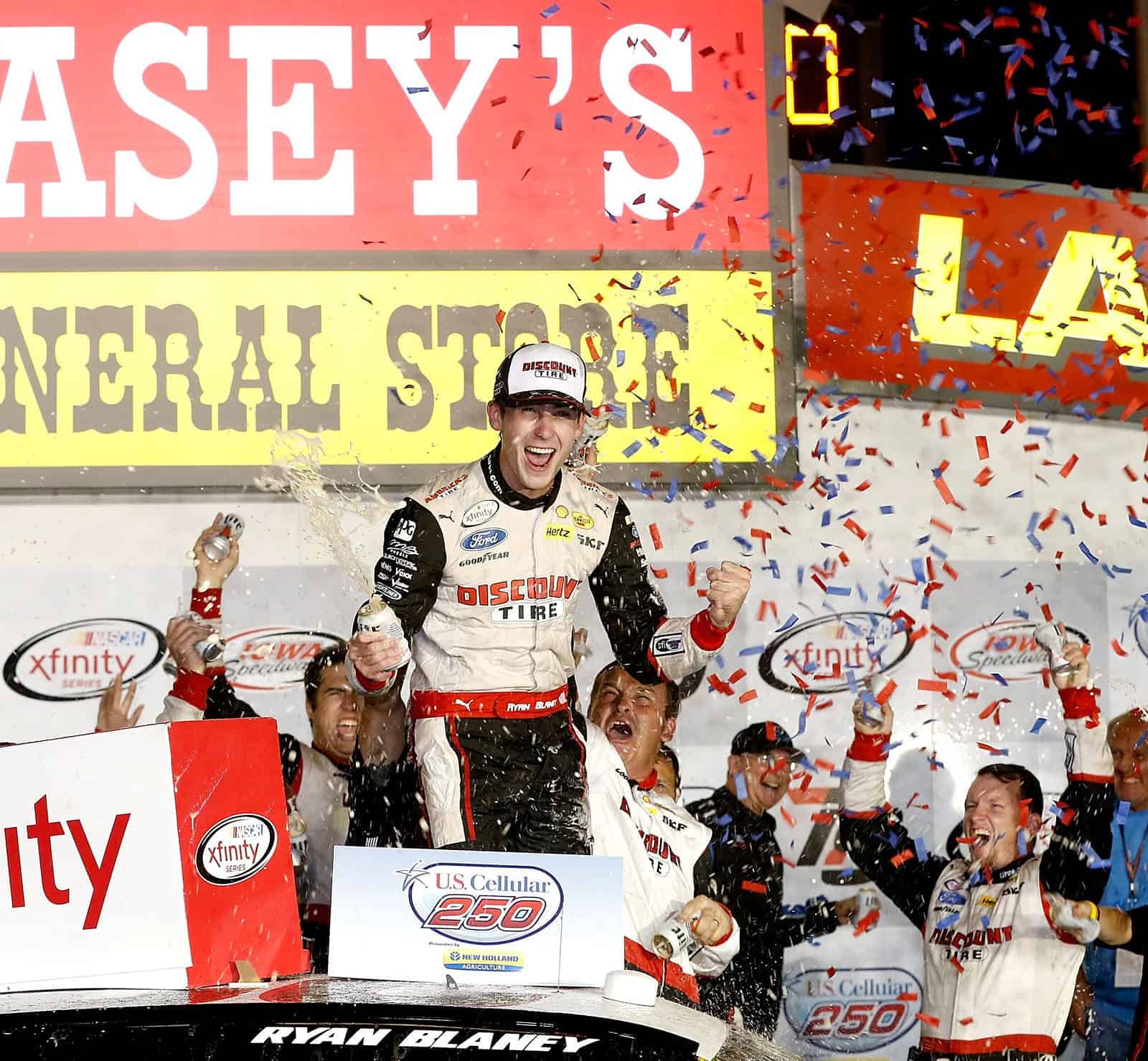 Fans of a good redemption story were in for a fun time on a hot Saturday night in Newton, Iowa. One week after giving away a victory in Indianapolis, Ryan Blaney put on a short-track racing master class at the .875-mile track, dicing his way through the  field and leading a track-record 252 laps out of the 260 ran, a career-high for Blaney.

Blaney’s only weakness came in the race’s late restarts, when he was joined on the front row by Brendan Gaughan. Looking for his first win of 2015, Gaughan pressured Blaney, diving deep into turn 1 and nearly clearing Blaney multiple times. The heated battle would come to a head in the race’s penultimate restart, when Gaughan ran into the side of Blaney, jerking both drivers sideways and sending Gaughan back to fifth as a spin behind him brought out the final yellow.

Blaney would take off on the final restart to claim the victory, holding off runner-up Regan Smith. Gaughan would settle for fifth.

The victory was Blaney’s third career triumph and the third straight win for Team Penske in the August Iowa race. The organization won in the previous two years with Brad Keselowski.

Smith has suffered his share of struggles in recent weeks, but by dodging a few bullets and holding off a slew of RCR drivers, the JR Motorsports driver was able to hold on to a second-place finish on Saturday, his best of 2015. The result moves Smith within 39 points of points leader Chris Buescher, in position to strike should Buescher stumble.

Chase Elliott has found defending his 2014 Xfinity Series title to be difficult this year, but as the laps wound down in Saturday’s race, the Georgian had worked his way up to second. Looking to find a way to get to victory lane, crew chief Ernie Cope elected to give Elliott two-tires during a late round of pit stops to give him the lead.

The bold move blew up in Elliott’s face when he was the only one to take two tires. Elliott dropped back outside the top five on the ensuing run, fading quickly before being involved in an accident with Brandon Jones. Elliott would recover to finish ninth, but the team has to feel like they gave a great points day away.

Saturday was an ugly night overall for Roush Fenway Racing. Darrell Wallace Jr. was running inside of the top five when an incident with Erik Jones on pit road left him with extensive front-end damage.

Impressively, Wallace fought his way back into the top 10 as the race entered the closing stages, but the comeback would be short-lived as he and teammate Buescher collided on-track, causing Wallace to spin and reigniting the feud between the two drivers started earlier this season at Dover.

Buescher would fair no better, losing a left-front tire in a late-race incident and finishing outside of the top 10 for the fifth straight race.

Ryan Reed drifted back to 19th after contact with Ross Chastain, and took out his frustrations by shoving Chastain in the back as he got out of his car. The only RFR without controversy, Elliott Sadler suffered an early speeding penalty and struggled before scrapping his way to an eighth-place run. Saturday will be a night to forget for the Ford juggernaut.

While most will remember Chastain’s night for the incident with Reed, the Floridian also tied his best-career non-restrictor plate NXS finish (Kentucky, 2013) with a 10th-place performance in Iowa. The result is Chastain’s third top-10 of 2015, following similar performances for JD Motorsports at Daytona International Speedway.

With the Sprint Cup and NCWTS both in Long Pond, Pennsylvania for races at Pocono, only two drivers dared to make the flight and pull double-duty this weekend. Jones flew out to Iowa after competing in the Pocono Mountains 150 earlier in the day, coming from the rear and overcoming a spin on pit road to finish seventh for Joe Gibbs Racing.

JJ Yeley made his way to Iowa to compete in the No. 26 Toyota for JGL Racing before returning to Pocono on Sunday to compete in the NSCS race with BK Racing. Yeley drove an impressive race for the team, rising as high as 12th in the closing stages of the race before late contact relegated him to an 18th-place finish.

Think its more the Cup Lite teams rather than Cup drivers who have made the Infinity series what it is today.

Or isn’t today, a vibrant entertaining racing series. I think it is done.

Russ and JohnQ are idiots. How could you not like that race? It had everything!

You did not do your homework, There were 2 guys that ran Iowa and Pocono. JJ Yeley drove the 28 JGL Toyota in Iowa. He was running 12th on the last lap and was 3 wide on the high side of the 4 and 16. When the 4 got into the 16 it pushed him into JJ sending him into the wall, he finished 18th on the lead lap. After the race he flew to Pocono to drive the the 23 Dr Pepper car to a 30th place the finish. I guess the small teams just get overlooked. Please make note of this.
Thank you,
JGL PR

I have no excuses. I just missed this. I’ve written about Yeley many times throughout the year, so I can’t believe it slipped my mind. I’ll fix the article for you, and apologize for making you feel unnoticed. I promise that was never my intent.

Thank you for your honesty. We appreciate it. JGL is trying very hard to step up our program to compete with the cup teams.