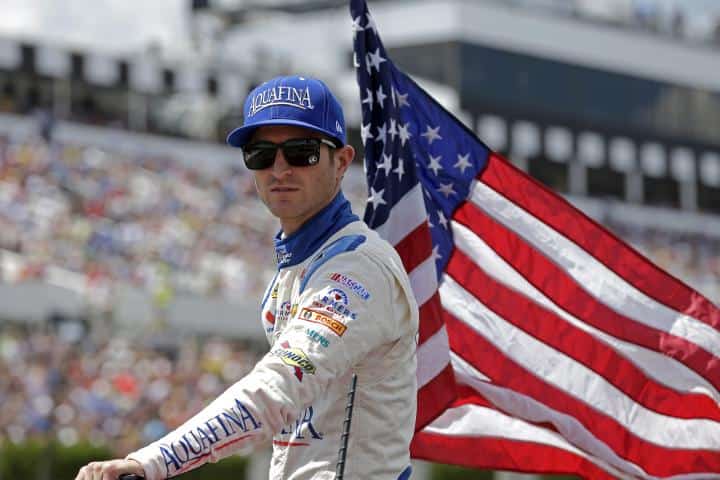 ONE: Kasey at the Bat

Casey at the Bat is a well-known, much-loved baseball-themed poem written in 1888 by Ernest Thayer. The story of the poem is about a team from the fictional town of Mudville, down by two runs, in the bottom of the ninth, hoping to get their star hitter the “Mighty Casey” up to the plate to secure a victory. In the end, the Mighty Casey strikes out losing the game for his side. So why, you might be wondering, am I mentioning this? Well, because there are parallels to another well-known Kasey – Kasey Kahne. Technically the 12-year, 417-race veteran holds the final transfer spot but it is only a matter of time (and 13 points) before Kyle Busch and his four wins takes over the spot. It has been another frustrating year for Kahne, as once again the reality of his results has not met expectations just as for the fictional Casey in the poem.

In fact, it has been something of a theme across his three-plus years with Hendrick Motorsports. In 129 races, Kahne has just five wins, five poles and a paltry 28 top fives. His overall season finishes have trended downward (2012, fourth place; 2013, 12th place; 2014, 15th place) and he’s in jeopardy of missing out on the playoffs altogether this time around. Last season, his victory in the penultimate race of the regular season at Atlanta Motor Speedway secured his place berth. He needs something similar this time round. As one of his long-time, loyal fans told me yesterday: “Just tired of him not living up to his potential. He is running out of excuses.” And you would be hard-pressed to argue again that harsh but fair evaluation of Kahne’s performance.

Just five races remain before we begin the 2015 iteration of the Chase and we have a real amalgam of tracks on the slate prior to the first race of the playoffs at Chicagoland Speedway on September 20th. First up – and more on which below – is a trip to upstate New York and the Watkins Glen International road course before we head to Michigan International Speedway for the second race of the season at that particular venue. This race will see a second running of the high-speed drag package from the Brickyard. And given what we say at the iconic race Indianapolis track, let’s hope it won’t be a turgid affair. We then finish up the “regular season” with an excellent three-race stretch of some of the best tracks of the circuit: the night race at Bristol Motor Speedway, a return to the Labor Day tradition at Darlington Raceway before we head to the cutoff race at Richmond International Raceway. So we have a plethora of track shapes and sizes in the next six weeks and more than enough opportunity for those drivers on the outside of playoffs to bring themselves back into contention for a chance at the big prize. It should be fun to watch as desperation levels ratchet up notch by notch over the coming races.

Ahead of race number 22 of 2015, it was a tough conclusion to the race at Pocono for the No. 22 of Joey Logano. The Team Penske racer took the lead on lap 94 of 160 and, with the exception of five laps as the pit stops cycled through, held the lead for 59 laps (and 97 laps in total on the day) until he ran out of gas with three laps to go. It was a heartbreaker of an ending for Logano, who has not won since the season opening Daytona 500. “We keep getting so close to these wins and they don’t happen and it is so frustrating,” said Logano in a Penske-issued post race statement. “The truth is that is if we keep racing hard and racing to the front we will win races. We were so close. You are counting down the laps in your head thinking you are going to make it but just didn’t do it. I am so proud still of what we did today and it was a great weekend and we are happy about the speed we have in our cars and the way we executed, we just have to figure out why we didn’t have enough gas.” Fuel issues aside, Logano can at least take solace in his great consistency with 12 top fives and 15 top 10s on the season so far. His average finish of 9.9 is better, to date, than his 11.3 average for 2014 but his wins total of five looks a distant way off for now. All that said, if Logano can keep knocking on the door, it will open soon enough.

FOUR: Next Up – Watkins Glen

Next up, we head to Watkins Glen International for the second and final road course race of 2015. Situated in upstate New York, just south of Seneca Lake, the track has had several different configurations with NASCAR racing the eight-turn 2.454-mile long “short” course. NASCAR’s roots at Watkins Glen can be traced all the way back to the 1957 season when Buck Baker won the first stock car race run at the circuit. NASCAR returned in 1964 and 1965 before going on a 21-year hiatus. Tim Richmond won the first race after the Glen returned to the schedule in 1986 and the venue has had a place on the Cup calendar ever since. Tony Stewart has the most wins (five) amongst active drivers, with Jeff Gordon one behind with four. Kyle Busch is the only other driver with multiple wins (two). But many eyes will be on AJ Allmendinger, who will be looking to repeat his 2014 triumph and secure a Chase berth for his single-car JTG Daugherty Racing operation. A 2014 Economic Impact Report prepared by the Washington Economics Group showed that the annual economic impact on the state was $204 million, $40 million of which was in tax revenue while the direct and indirect job impact was estimate at 2057. Obviously this is not all NASCAR, but it does give an idea just how big and effective these race weekends can be. Should be a fun one to watch this Sunday.

And finally this week, a brief word on Greg Biffle, who finished fifth – just his second top five of the last seven and his seventh in the last 93 races. It was a brief respite for the Roush Fenway Racing veteran in what has been a very trying season. Biffle sits in 18th place, some 51 points out of playoff contention. “We need a win to get in the Chase, we won’t get in on points,” he noted in to NBC Sports Network. “We will have to get in on a win.” It seems unlikely but you never know. It might just happen.

Kasey has had some bad luck for sure, Kyle Busch with his missile like precision directed at the 5 car didn’t help last year, but Kasey didn’t help himself either. I was totally shocked when he got a contract extension, going by the standards of HMS, his performance certainly does not seem to warrant it. Must be the T-shirt sales by teenage girls..even Kasey is getting too old for that nonsense.

Kasey Kahne should be throwing Jeff Gordon a huge retirement party because if it wasn’t for him stepping aside this year, I think Kahne would have been sent packing to make room for Chase Elliott. Kahne’s a really talented driver, he just can’t put it all together at the right time.

I believe you are correct…..

Gordon’s retirement was coming as early as Charlotte last year when he sat out practice because of his back, and that is the incident we know about I’m sure there are others that were behind closed doors.

That being said if you look at the history of HMS there has always been that one team that wasn’t living up to their potential. It was the 88 after Junior moved over, then it was the 24, now it’s the 5. Unfortunately I don’t see that changing anytime soon because HMS will put its resources behind Chase Elliott to make sure he doesn’t flop as a rookie. Khane got the extension because he is a team player who will drive the test car in the race, and more often than not he will bring it home in one piece.

I listen to the communication each week thru Raceview/Scanner between Kasey and his crew chief. They don’t appear to be on the same page, not sure if they are even in the same country.

Interesting. Listening to them frequently do you have an opinion on what exactly the problems are?

Its always the drivers fault. How many races did kyle busch win in the 5 car? Being on a team with jimmy,dale, and jeff it seems the 5 car gets the leftovers. Ever notice that kasey qualifies good makes his first pit stop, loses 2 or 3 positions, they adjust on the car, it gets worse, makes 2nd pit stop loses more positions, they make car even worse and so it goes. Ever wonder why kyle left that team when henrich is supposed to be the number 1 team. Takes more than a driver to win races.