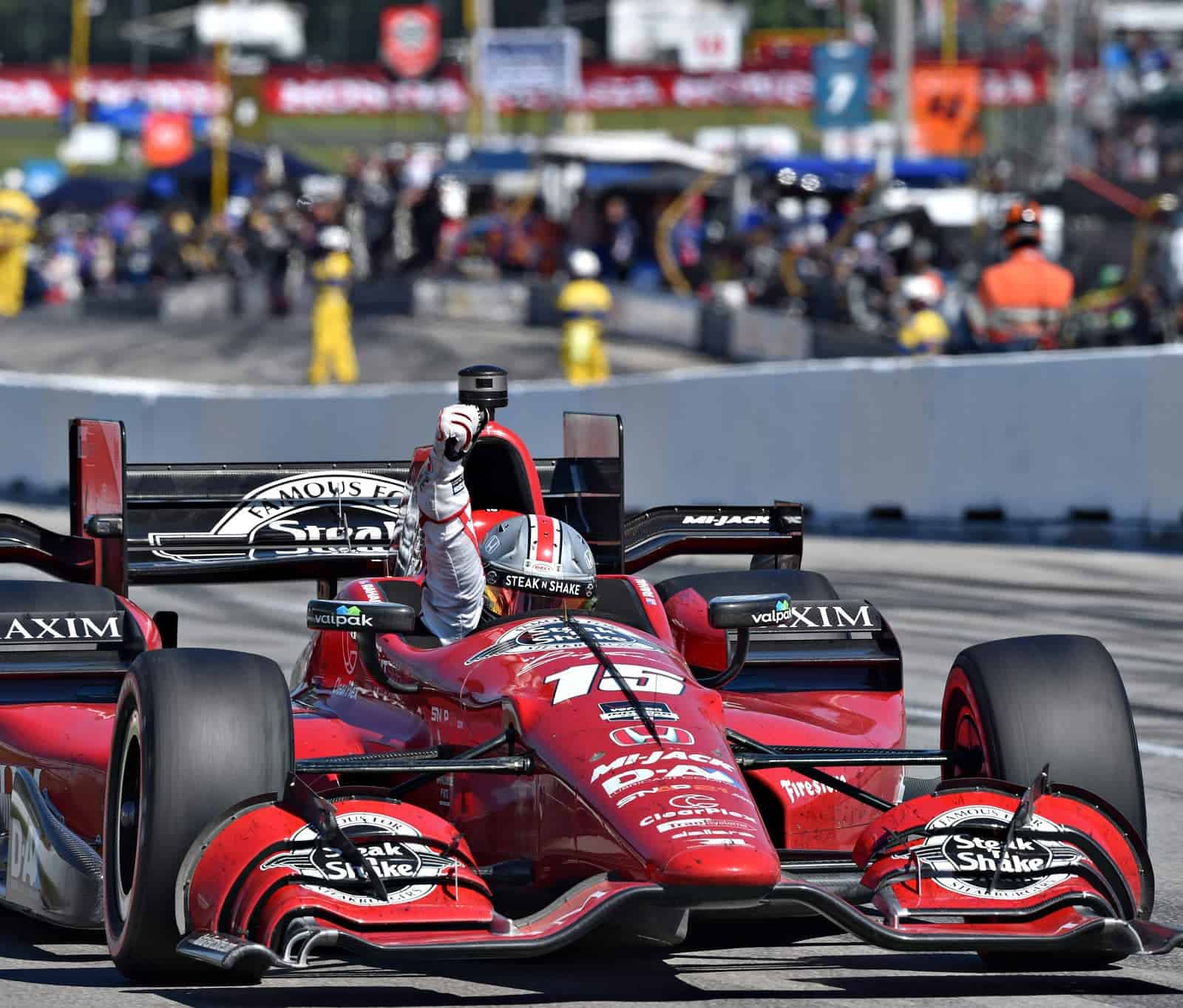 In a Nutshell: At a track where cautions have been scant over the past few years, the yellow flags proved to be the element that changed strategy and shook up the field. Graham Rahal, who had started in 13th, benefitted from a timely caution as he made his way to pit road, ultimately coming out with the lead and holding the position for the rest of the event. Rahal earned his second win of the season and his third of his career while tightening the championship race. Juan Pablo Montoya now holds a nine-point edge over Rahal in the standings.

Key Moment: Sage Karam’s spin. On lap 66, after Tony Kanaan and Scott Dixon pitted, Chip Ganassi Racing driver and teammate Karam spun on his own and stalled bringing out a full-course caution. Rahal turned on to pit road just before the caution lights shone, allowing him to pit and then take the lead of the race. From that point forward, Rahal drove defensively and maintained his position at the front, even after a late Charlie Kimball spin brought another caution and Rahal had to fight off Justin Wilson on the restart.

News: Derrick Walker’s resignation from INDYCAR is a surprising and disappointing one. Walker had been one to bring stability and intelligence to the series regarding its rules, scheduling, and overall direction. With him leaving, the series now must find a solid and respectable voice to help guide it – yet at the same time, his departure is a continued signal at the strange and silly politics that govern it. While one might hope that Hulman & Co. will find the best-choice candidate, they have repeatedly shown that decisions like those are where they fail. Or when they do choose a decent prospect, they get run off.

Wilson has been running with Andretti Motorsports since the Indy 500 and has had on and off races. At Mid-Ohio, Wilson looked like he might just steal a win. Through much of the race he drove with an aggressive attitude and took the fight to whomever held the position in front of him.

Montoya: We did everything we were supposed to do today and the race was playing out perfectly for us. Unfortunately we got a caution with about 25 laps to go that we didn’t need. It worked out for some and didn’t work out for others. But we had a great car and we still have the points lead. Ready for Pocono, where we won last year.

Dixon: It’s tough when everyone has the same pace and everyone is on the same tire. With the new aero kits, there’s just such a big wake behind the cars and it sometimes makes it tough to get around people. We were trying to line up for that last restart there and the leader went way early there. Not a bad day for the Target car overall in the points and (we) moved up a bit in the championship race.”

Rahal: Honestly, if I’d won a lot of races in my career but I never won this one, I think I’d be pretty disappointed. For the Rahals, when it goes back to Jim Trueman and everyone else, this track has been pretty special to us for so, so many years. Jim was the man who founded this place, got this place going. He was also the one who got my dad started in racing. It’s come full circle. I used to go to the Steak ‘ Shake about 5-8 miles from here and play around, eat a lot of cheese fries and stuff. It’s funny how this whole thing has come together. I’ve got the Buckeye helmet; this is all amazing.

Karam: It was a big learning experience for me today. Just really bummed for the mistake I made going into turns 4-5. I was adjusting my brake bias and missed the apex to the corner and that was it. I was coming into the pits that lap as well. The car was pretty quick all day and who knows what we could have done if we stayed on the lead lap there.

What’s Next: Two races remain on the IndyCar calendar. The next one up is at Pocono, the ABC Supply 500 on August 23.  The race will be broadcast on NBCSN at 2:00 p.m. ET.

I watched this race rather than that fiasco at Pocono. I saw the interview with Sage Karam. When he was asked about the incident between him and Graham Rahal, I had to give my head a shake when I heard him say that the veteran drivers like Rahal are intimidated by a young driver with more talent. I thought I had suddenly turned the channel over to the NASCAR race and was watching an interview with Kyle Busch.

There are a lot of drivers like Kyle in a lot to different series. It looks like there is another entitled generation on the way.

Graham seems to be running better since he got engaged. I wonder if they consider driving each other’s race car?

Oh, I’m willing to bet that it has not only been considered, but that, when nobody was paying attention, Graham took a ride in her car and she’s turned a couple of laps in his.

Boy, can you imagine what it will be like for Graham having John Force as his Father-in-law?

I thought the same thing when Ashley got married.