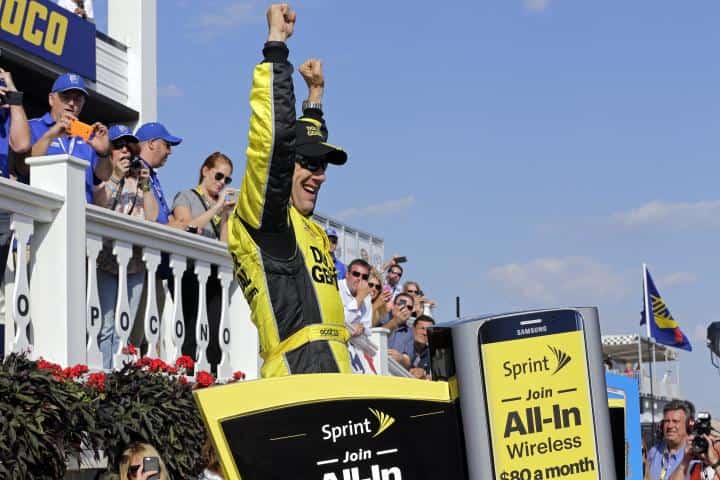 It’s good to be Joe Gibbs. As a team owner in the Sprint Cup Series, Gibbs has won five of the last six races (including the last four consecutively) and eight races total in 2015 amongst his four driver in the 21 events that have been run so far this season. That’s the most wins of any car owner so far in 2015, with the dominant Hendrick Motorsports currently capturing six victories to Joe Gibbs Racing’s eight.

It was doubtful that JGR would be the team with the most wins at this point in the season, however. In 2014, JGR won only two races all season and couldn’t keep pace with the likes of Hendrick and Stewart-Haas Racing. Now, they are outperforming both, even after Kyle Busch — who has won four of those eight races for Gibbs — was out of the drivers’ seat for the first 11 races for injuries sustained in the season-opener at Daytona in the Xfinity Series.

Currently, three of Gibbs’s four cars are solidly in the Chase and Busch will assuredly get there too. Despite his injury, NASCAR granted Busch a waiver, saying that if he could win a race and make it into the top 30 in points, he would be allowed to compete in the series’ postseason. Now, 10 races and four wins later, Busch sits only 13 points out of the top 30 in points, will presumably get in within the next week or two, and may have done so Sunday in Pocono had he been able to save enough fuel to make it to the end. Busch ran out of gas on the last lap, handing the race win to teammate Matt Kenseth for the JGR’s fourth victory in a row. The win was Kenseth’s second.

The other two JGR drivers – Denny Hamlin and Carl Edwards – each have one win apiece.

As you might expect, the three-time Super Bowl winner turned NASCAR team owner is thrilled, and gave lots of praise, not only to his drivers and crew chiefs, but to the many employees at the team’s shop in Huntersville, North Carolina.

“When you really realize this sport is really one big team, and we’ve got a lot of people back at the race shop working on cars,” Gibbs said post-race. “Some of them have been working 10, 11 hours a day, and as everybody knows, we felt like we were behind most of last year.  It shows you how hard our sport is.”

However, there is another aspect to this race team that Gibbs thoroughly enjoys, and one that Coach Gibbs has mentioned regularly in his many recent trips to Victory Lane.

“I said a big thanks to Todd Vasos and Rick Dreiling at Dollar General,” Gibbs said. “Our sport is unlike any other, you’ve got to have great partners.  And to hear them over the phone get excited with you, and you realize all that they invest with you, and they want to win.”

Dollar General was the primary on Kenseth’s race-winning care at Pocono Raceway, with the bright yellow paint scheme serving as Gibbs’s indicator that they were about to win the race.

“Actually, in the race today I was probably like a lot of people,” Gibbs said, recalling the final several laps in the race. “I’m looking at Joey [Logano] and Kyle figuring, hey, one of these two guys is going to have the best chance. I knew that Matt was in there somewhere close, but I wasn’t sure. And then when I see Joey ran out, then I figured, hey, we’ve got a chance with Kyle. Kyle runs out, and when I looked up, only thing I saw was that yellow, and I was thrilled.”

It was the presence and excitement of the sponsors who were either at the racetrack or watching from afar where Gibbs has really found some satisfaction as the team has found its stride this year, especially considering that the sponsors are enjoying the success of their race teams as well.

And when the sponsors are happy, everyone is happy.

“There’s none of those sponsors that we have, they all have somebody they’re trying to beat out in the world, and certainly on the racetrack,” said Gibbs. “I want to say a big thanks to everybody from us.”

However, it wasn’t just Dollar General that Gibbs had some kind words for.

“TRD is a great partner,” Gibbs continued. “They have also worked extremely hard, and David and the guys have been going after it to try and get our motors where they need to be, and I think we’re there.”

While all race teams are grateful for their sponsors and there are many great partners in the sport, Gibbs’s seems to have personally enjoyed watching the sponsors get excited about winning so many races and the optimism they must feel about where they will be at the end of the year.

“It’s a huge deal for us, for that company,” Gibbs continued, again referencing Dollar General. “Rick, probably the only place that he really promotes and works hard at promoting his brand, one of the key places is NASCAR, and so it’s a big deal for us. Whenever your sponsors, like I said, win, they’re a big part of this. It’s not like any other sport, and I love that part of it in that you’ve got to have a great sponsor, and they’re part of the team. It goes all the way back to Norm making it possible for us to get in racing, and he’s still with us, at Interstate Batteries. But Rick and Todd there with that company, Dollar General, they’ve made a big presence, and to win yesterday, too, was a big deal for them.”

Dollar General was on Busch’s race-winning truck in the Camping World Truck Series race on Saturday.

There are many race fans — and, yes, sometimes even people within the sport — who tend to look at sponsors as a necessary evil. Sponsors are the key ingredient to keep the sport moving, but sometimes their reach and influence is felt in ways that sometimes seem unfair, overbearing, or sometimes obnoxious. It’s easy to develop negative attitudes about corporate sponsors being so integrated into a sport, arguably more so than any other professional sport.

Gibbs, however, takes on an attitude of gratitude and enjoyment that feels realistic and genuine and is perhaps one that others should emulate. Again, the sport wouldn’t be where it is or what it is without the association of corporate sponsors who keep cars on track, the doors to the tracks open, and the events on television. Sometimes, it’s easy to forget that or to become bitter about the reality.

And it seems like JGR has a handful of good partners who have been associated with the race team for a long time and are enjoying the team’s success with the same enthusiasm and determination of the team members who make it all work. Remember, there are people behind those corporate emblems who are race fans too and want to see their team succeed with the same gusto as the team’s most avid fans in the grandstands or at home. There’s a lot to be said for that and it shines through when the team owner takes time to mention those individuals at length rather than giving them a brief mention when rattling off the day’s events. (“The Dollar General car was fast today.”)

Regardless, while Kenseth, Gibbs, and crew chief Jason Ratcliff were spraying champagne, there were sponsors either at the track or at home watching who were pumping their fists in excitement right along with them.

On the other end of the spectrum, there were corporate executives shaking their heads in frustration as they watched one of their cars run out of fuel on the last lap, that elusive victory just outside of reach. There is something to be said for the kind of passion that is put into it by some of the sport’s biggest contributors, and maybe their involvement isn’t such a necessary evil after all.

OMG. Bandwagon is in full swing.