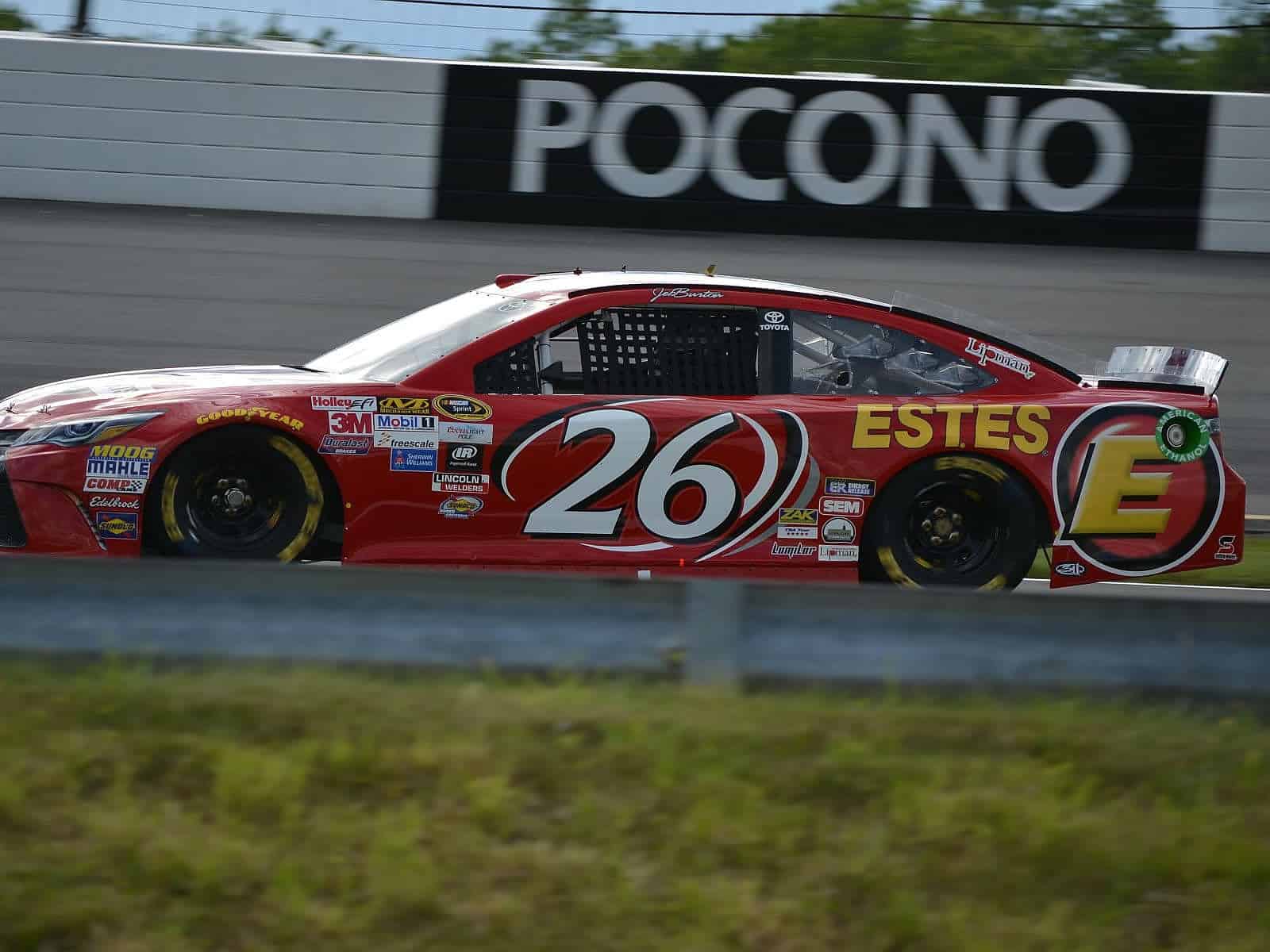 Lady Luck certainly made herself known this past weekend at Pocono. How else would Matt Kenseth have snared his second win of the year?

All kidding aside, there was an inordinate amount of déjà vu and serendipity that played out on pit road throughout the weekend. It was a bit like the racing gods were out to make sure NASCAR and the raceway got the point after Jeb Burton smacked pit wall on Saturday morning. Had we all managed to shelve the panic-button topic of checking the unlikely points of impact at all the tracks after Kyle Busch made such a quick recovery from his Daytona accident? It was certainly tempting to ride the wave of euphoria as he notched up all those wins with his eyes on the Chase. The heads of the media all were turning away from the boring and constant topic of safety.

So, impact number one. Burton slammed into the wall of pit 42, sending a few media and fans scurrying. The car was toast. Jeb was fine. But it was an odd place to hit. He just sort of lost control coming out of Turn 3 and aimed straight for pit road. We all pondered the fact that cars shouldn’t be able to slide into that place by simply spinning out on the racing surface. The idea of altering pit road was tossed about in the commentary booth. Some fans at home nodded their heads, and a few moaned as it seemed like a broken record was being set up for another gazillion plays. Safety, safety, safety…

We might have managed to forget the whole thing until the truck race later that afternoon. The No. 07 truck spun coming out of Turn 3 and started a familiar slide in the general direction that Burton’s No. 26 car had earlier in the day. The Ray Black Jr.’s truck ran over the skid marks remaining on the track. While the truck took a harder left and smacked the wall before the true entry to pit road, the comparative nature of the wreck started a flashing light again in our collective consciousness. Something ought to be done about pit road. Move a pit. Lengthen the already massive road farther down toward Turn 1. Change the outer pit wall at pit entry. Something.

The media latched on to the idea and brought up the topic during pre-race talk shows. But you know, nobody was hurt. It really wasn’t that big of a thing, was it? If nothing changed at the track by next year, nobody would’ve been squawking.

The racing gods listened in and heard the doubt and disinterest. So, they hammered home the problem for a third time. Kasey Kahne’s No. 5 executed virtually the same slide as Jeb Burton during the Cup race on Sunday afternoon. The only difference was that Kahne did a better job of steering his machine and managed to roll it farther down pit road, landing between pits 37 & 38. His car cracked the boiler plate wall and sent helmets flying. Lady Luck simply made sure nobody was stopped in their box at that time, and we were even between green flag stops so no crews were standing at the wall. Kasey got out of his car scratching his head, trying to figure out just what happened. Further evidence that mystical hands had a part in this strange play.

And like a Christmas tree, NASCAR Nation lit up with how something should be done about Pocono’s pit road. It was obviously a hazard zone! Even though through the decades of racing at this track, NASCAR had never had a car smack the inside pit wall before, clearly they were capable of doing it. And what if there had been crews there? What if a lucky fan with a Hot Pass wasn’t paying attention? What if, what if…

It might seem like NASCAR has become obsessed with fixing all the walls at all the tracks this year, but in reality it isn’t a bad thing. However, it is very easy to only repair what is the obvious problems. It seems those who look over us understand our human foibles and simply want to help. Thus Burton, Black, and Kahne were used a pawns in this pursuit of a safer sport.

NASCAR and Pocono have both stated that they will be looking at the situation and putting in place some improvements for the following season. Such is how we respond to those near catastrophes. Isn’t it wonderful how lucky we are, though? Despite the alarming incidents, nobody was injured. That’s when you stop to wonder if luck had anything to do with it at all.

Sometimes luck is not so kind to you.  Sometimes your luck brings out the true colors in others.  While Jeff has enjoyed much success at the twisty turns in New York, in 2003 he just didn’t have a great day.  On the last turn of the last lap, he runs out of gas.  Kevin Harvick and the No. 24 had enjoyed previous discussions earlier in the race, and Harvick took Gordon’s bad luck as a chance to put his enemy of the day in the wall.

However, following the theme of the above column, Jeff Gordon sat in his wrecked car on the front stretch for several long minutes before the safety crews bothered to check on him.  This incident brought to light the inconsistent performance of safety crews at various tracks and resulted in NASCAR improving standards and expectations on race weekends.

And notice how quickly Pocono Raceway addressed the problem by stating immediately that they would make changes before Cup goes back next year. This was before the race was even over I believe. Quite a difference from Nascar owned tracks who do the PR spin after the race, talking about how safety is their #1 priority blah blah blah, wait several weeks, and then decide to make changes. I commend Pocono Raceway for the way they handled this from the get go.

If they extend that wall so that nobody can enter the pits that way, they will need to install safer barriers on the inside of that wall as well. If there was a wall there, Kasey and Jeb would be crashed head on into any wall that would be there. So fixing one issue creates another.

Good column and an important one. I agree with Steve – yes they need to fix the issue that those crashes raised one after the other and it does seem that the owners at Pocono will actively pursue that. And yes, they need to put SAFER barriers on the inside walls of the track, too.

You think a car won’t crash into X area? Well think again because more than likely, it will.