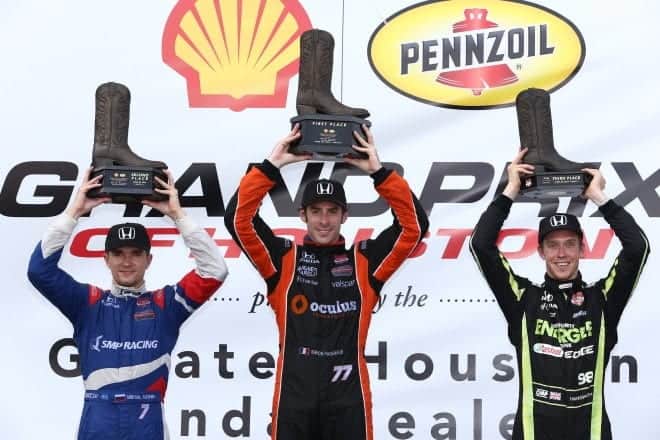 In the 2015 Verizon IndyCar Series finale, one of the series’ best rookies from 2014 will make his return.

A year after suffering a concussion, fractured ribs, a broken right clavicle and chest injuries during a nasty practice crash for IndyCar’s 2014 season finale at Auto Club Speedway Mikhail Aleshin announced he will return to IndyCar competition August 30th at Sonoma.

Aleshin, an IndyCar rookie in 2014, was running the low line at Fontana during final practice for the MAVTV 500 when he got loose, spun up the track and into Charlie Kimball. The impact sent Aleshin into the catchfence and back across the racing surface before coming to rest on the apron of the track.

A year’s worth of uncertainty as to whether Aleshin would return to IndyCar competition followed the incident; a combination of both rehab and financial issues kept the Russian native on the sidelines.

Those questions were finally answered Wednesday, as Aleshin and Schmidt Peterson Motorsports announced the continuation of their partnership by trotting out an additional entry at Sonoma. As part of Aleshin’s return, he will participate in next week’s test at the track, his first time behind the wheel of an Indy car with one of the new aero kits that debuted this season.

“I’m incredibly happy to be back in this interesting racing series with this team,” Aleshin said, adding they have achieved “considerable success.” While the race is scheduled as a one-off appearance, he is still hoping to return full-time to the series in 2016.

“I hope this race,” he added, “Will be a significant step towards this goal.”

Aleshin will be joined on the grid by teammates James Jakes and Ryan Briscoe, the latter of which is filling in for James Hinchcliffe. When he takes the green, Aleshin will be going for his first career IndyCar victory. His best finish in 2014 was a second at Houston.