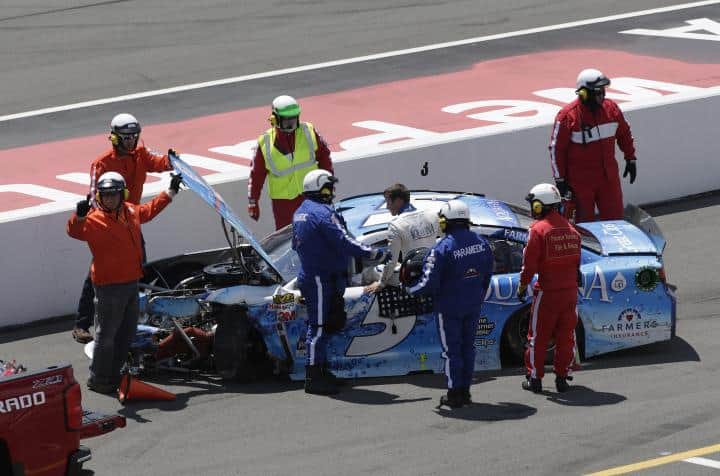 Joe Gibbs Racing was in Victory Lane at Pocono on Sunday afternoon… just with the wrong car. Matt Kenseth, already a winner earlier this season at Bristol, went on to take the checkered flag in Sunday’s Windows 10 400, after JGR teammate Kyle Busch and Team Penske driver Joey Logano both ran out of fuel at the final lap.

Fuel mileage is always a huge gamble, and this week Busch and crew chief Adam Stevens just didn’t win that bet. With that, the No. 18 Toyota finished the race 21st, which gave Busch only 24 additional points going into Watkins Glen next weekend. That means Busch is now just 13 points out of the coveted 30th slot in the points standings, and a position in the Chase for the Sprint Cup, which is currently held by David Gilliland. If Busch finishes 25th or better in the remaining five races, he’ll break the 30th position and be eligible to compete in the Chase for the Sprint Cup.

Speaking of the Chase, another driver who actually fared well at Pocono was Jeff Gordon. The four-time Sprint Cup Series champion finished third Sunday and gained another 42 points. The gain helps further secure his 12th-place slot in the points. Gordon certainly bounced back well from his dismal finish of 42nd two weeks ago at Indianapolis, his career worst finish at the track.

While Gordon and the No. 24 team know that they need solid finishes in the remaining races to get them into the Chase, they do currently have a spot in the Chase Grid with somewhat of a points cushion before the Chase field is set five races from now. Don’t let that fool you however. Gordon wants to win, especially in his final full-time season in the Cup Series.

Now let’s dive into this week’s mailbox questions from you, our readers…

Q: Hi Greg, the Kasey Kahne wreck during the race on Sunday at Pocono where he ran down into the pit wall and actually moved it, was pretty bad, but could have been much worse. It got me thinking, we always hear about the driver safety features in the car, but what precautions does NASCAR take at each track to protect the crews behind the wall and in the pits? Thanks! – Nealy K., Langhorne, Penn.

A: Hi Nealy, thanks for sending us a question this week. That wreck, or should I say wrecks, at Pocono this past weekend were really scary, especially Kahne’s during Sunday’s Windows 10 400. Anytime a car crashes into or near pit wall (which is fairly uncommon) it’s never good, and like you said in your email, Sunday’s wreck could have been much worse. Seeing that piece of debris off the No. 5 car lodged into the pit wall was pretty representative of the sheer force that a 3,300-pound stock car colliding with the wall has.

To answer your question on what NASCAR’s done to address pit crew and pit road safety, here’s a quick look at a few key measures that are in place today. Back in the early 1990s after a couple of awful incidents, pit road speed limits at each track were put in place. In 2002, the sanctioning body added to the rules that each over the wall crew member on each car wear a mandatory helmet during each race. And this year, after fire erupted out of the No. 62 car of Brendan Gaughan at Richmond back in April, NASCAR ensured that each over the wall member had head-to-toe flame resistant gear under their firesuits during each race. This was a ruling that wasn’t as warmly accepted by all in the garage area as you would have thought. Check out this great piece on NASCAR.com breaking down the pit crew fire safety measures.

Also this year, we saw all NASCAR officials, even those in the flag stand, don helmets for the first time.

All of these measures that the sanctioning body has taken has drastically improved the safety on and around pit road. But at a track like Pocono, more can be done.

On Monday, Brandon Igdalsky, President and CEO of Pocono Raceway, issued a statement about the incidents with Kahne, Jeb Burton and Camping World Truck Series driver Ray Black Jr. this past weekend.

“Our commitment to driver safety is paramount,” said Igdalsky. “We have made multiple upgrades and updates to our facility, with more safety improvements rolling out before the 2016 NASCAR season. We work hand-in-hand with NASCAR throughout the year to execute and implement these changes. Once NASCAR collects the data, as it pertains to the unique incidents involving Jeb Burton and Kasey Kahne from this past weekend, we will communicate with one another and develop the safest solution.”

It’s nice to see the track step up after this string of incidents on pit road and make the changes needed to make sure these kinds of wrecks don’t happen again. And as far as NASCAR goes, the sanctioning body won’t stop making changes, if needed, to ensure every single team member and official both on pit road and behind the wall is as safe during competition as possible.

Q: Greg, what does the recent news about team co-owner Rob Kauffman leaving Michael Waltrip Racing for Ganassi say about the future of MWR, the relationship with Toyota and their sponsors? Do you think this is the end for Waltrip’s team? – Tyler P., Franklin, Tenn.

A: This news about the Race Team Alliance chairman and the majority stake holder of Michael Waltrip Racing, Rob Kauffman, leaving his ownership with MWR for what formally was Felix Sabates’s slot at Chip Ganassi Racing, was honestly a shocker. What now is clear is that things at MWR aren’t necessarily on track for success currently for 2016 in terms of sponsorship for the Nos. 55 and 15 cars, as well as a contract with manufacturer Toyota.

This leaves Waltrip alone in the ownership slot at MWR without a sponsor, a manufacturer, or the resources it takes to run a competitive, full-time Sprint Cup Series entries in today’s NASCAR. Provided the rumors are true that Kauffman will take the No. 15 team and Clint Bowyer with him to Ganassi, this isn’t good news for the future viable success of MWR.

Just this Sunday at Pocono, Kauffman did address the changes in ownership at Chip Ganassi Racing, and what the future holds for Michael Waltrip Racing. Essentially, he alluded to the possibility of a consolidation of the two teams, with the more successful Chevrolets of both Jamie McMurray (in the No. 1), and Kyle Larson (in the No 42) leading the stable, and the No. 15 of Bowyer with sponsor 5-hour Energy coming over from MWR.

The future of the No. 55 team sounded more dependent on the success of the team for the remainder of the 2015 season. He also said on Sunday that he sees the future of the sport even more geared towards teams coming together, and the end of the one-car “lone wolf” teams in the Sprint Cup Series, as he put it.

I never like to speculate on the future of race teams closing. Yes, to fans, there are wins and losses and teams to root for on Sundays. But to so many others, there are hundreds of people who have worked hard behind the scenes on these cars and inside the walls of these race shops. These folks have families, and have made careers in this sport. To say they will be out of a job without any real knowledge of what will happen, is, in my opinion, irresponsible.

This will be one story that we will continue to keep an eye on the rest of the year.

Have a question? Email me at greg.davis@frontstretch.com and make sure to check back next week when we’ll answer your questions on all things NASCAR. Until then, enjoy the racing from Watkins Glen!

When thinking about the Gannassi/Kaufman “integration don’t lose sight of the fact that manufacturer affiliations aren’t as hard and fast as they used to be. Penske owns a Ford Sprint Cup team as well as a V8 Supercars team. While at the same time using Chevrolet engines in his Indycar program. Gannassi is running a Chevrolet Sprint Cup and Indy Car teams while being the factory Ford team introducing the new Ford GT.