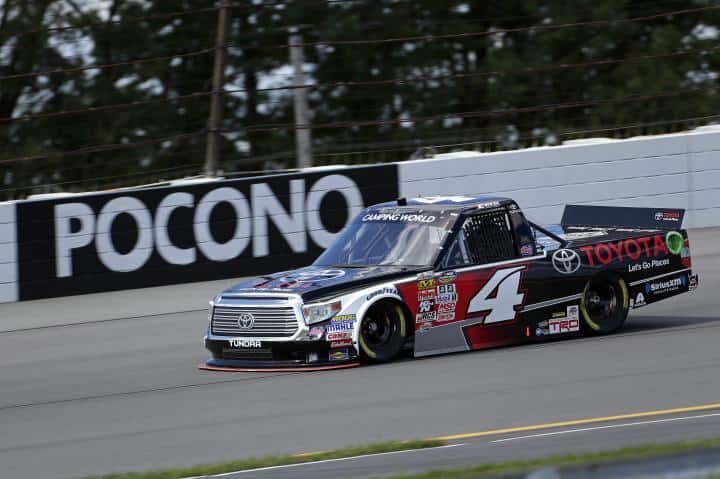 Welcome to the Frontstretch Five! Each week, Amy Henderson takes a look at the racing, the drivers and the storylines that drive NASCAR and produces a list of five people, places, things and ideas that define the current state of our sport. This week, Amy has some totally random thoughts on the summer of ’15.

While watching the race from Pocono on Sunday, was I the only one who was pleasantly surprised that NASCAR did not throw a caution in the closing laps? As the race inched toward completion with the field a little strung out and fuel mileage looming large, I’ll admit I was expecting race control to find a water bottle or a hot dog wrapper that required immediate removal. Instead, the race was allowed to play out, leaving teams to lie in the beds they made, while allowing those who had played the strategy game successfully to reap the benefits. That’s how a race should be officiated, without giving in to the temptation to stop the action in hopes that a restart will produce some fireworks. As a result, some fans were disappointed, others were elated, but what all fans were left with was a race that concluded fairly, with not a sniff of manipulation.

2. But that was kind of a crappy thing to do…

Well, at least there wasn’t manipulation in the finish. Earlier on, there were some questionable calls. When Brad Keselowski‘s tire got away after the driver slid through his pit, striking a couple of crew guys, NASCAR was slow to pull the trigger on the caution in the middle of a green flag pit cycle. The reasoning was that the tire had come to rest “in a safe location.” Except where the tire came to rest was on pit road. The far edge of pit road, yes, but on pit rode nonetheless. Not only could that tire have ruined someone’s day if a car hit it, there was the danger of it flying over the wall into the pits, where crews are working and fans with hot passes are wandering.

A mounted tire weighs well in excess of 50 pounds and could cause serious injury or worse. While waiting to wave the yellow helped teams who might have been caught on the wrong side of the caution flag, it needed to come out sooner. This was the second time in three weeks NASCAR has held the flag; it waited (and waited, and waited) to throw a yellow at Loudon for oil on the track – despite many drivers complaining of sliding in it – until pit stops had cycled through and a driver had gotten his lap back. That yellow flew within seconds. The yellow flag is for safety, not for making the race come out the way someone wants it to.

The other call that I’d really have liked to see the video for (remember when NASCAR said video evidence of penalties would be made available?) was a penalty on the No. 13 team for too many men over the wall. The team said that the extra man had been pushed over by a track safety worker. If that’s true, NASCAR should have looked at the penalty and probably should have rescinded it if in fact there was interference.

Maybe the TV audience never saw it because it was a smaller team, but it seems as though this type of thing was exactly what the video officiating was supposed to do: allow NASCAR to look at penalties and for fans to be able to see them.

This is something I cannot say enough. It’s discouraging to hear fans and media dismiss certain drivers and teams because they run midpack or worse every week on an extremely limited budget. It’s exactly that attitude that helps keep those teams from getting the backing they need. They deserve decent coverage from the media; they’re out there trying to compete every week. That doesn’t mean they should get the airtime that the race leaders or title contenders get, but they should get some mention each week. If there’s a good story to be told, it should be told.

It’s very frustrating for those teams to see and hear comments like “you know they’re hurting for material when they’re interviewing him (insert just about any small-team driver here).” Maybe the attitude should be “hey, cool, we never get to see this guy and he seems pretty cool!” It seems like it used to be that way more often, with a lot of fans pulling for the various underdogs, and it was good for the health of the sport overall. It’s also frustrating to hear fans complain when the broadcast does mention more drivers and then turn around and complain when they only cover a certain set. Damned if you do, damned if you don’t?

4. Should Denny Hamlin be worried?

With the announcement on Tuesday that Erik Jones will run a full Xfinity Series schedule for Joe Gibbs Racing in 2016 with a few Cup races thrown in, should Hamlin be worried? Team owner Joe Gibbs said Tuesday, “We’ve got a plan laid out in the future, and it’s something we can’t, you know, we don’t want to talk about now, but there is no question – this guy, Erik’s headed for Cup.”

Under NASCAR’s four-team cap, that would mean that if Jones is going to be in a Cup program in 2017, someone has to vacate a seat at JGR. With both Kyle Busch and Carl Edwards signed through 2017, the logical places to look would be the No. 11 currently driven by Hamlin, or Matt Kenseth‘s No. 20. It’s possible that Kenseth, who will be 44 in 2016, is thinking about retirement, but he’s certainly not driving like it. Then again, neither was Jeff Gordon a year ago, which made people think Kasey Kahne was on the hot seat with rising star Chase Elliott in the wings.

Hamlin has often seemed like a bit of an afterthought at JGR, though, so if Kenseth doesn’t leave voluntarily, the oft-injured Hamlin could be the one out of a ride. Of course, if Hamlin really is fourth fiddle at JGR, a move might not be such a terrible fate, after all. It will be interesting to see how this plays out.

5. All kinds of twisted

Don’t think road-course racing is exciting? Think again. Over the last few years, the road courses have produced some of the most exciting races and some fantastic finishes. Last year’s battle royale between AJ Allmendinger and Marcos Ambrose at Watkins Glen, or the matchup at the same track between Ambrose, Keselowski and Kyle Busch in 2012, though it was set up by NASCAR not throwing a caution for oil on the track, are some examples of the best racing you’ll see in NASCAR these days.

Plus, if you don’t like Jimmie Johnson, the film of his rather spectacular crash in 2000 should cheer you up; if you do like him, when you’re done cringing, you can laugh at his goofy helmet hair. Boom, confetti…

Road courses bring a few different players into the mix, while other top drivers struggle. It can be hard to pass, but it’s hard to pass everywhere. Road courses are just different… something new. The only thing missing is a road course in the Chase.

Still grimace when people gush over how great road course races are. For years stock car fans held road racers in contempt, and we reciprocated, because it wasn’t considered to be real racing.
What’s the old adage about “a drowning man clutches for any straw”?

I can only speak for myself, but I have ALWAYS loved road courses, since i first started watching the sport many years ago. They’re always circled on red on my calendar…I love the challenge, I love how different drivers are brought into the spotlight, I just love how different they are from the other tracks. I’d live to see two more on the schedule, one (preferably the Glen) in the Chase. It might be a new discovery for some, but they’ve always been on my list of must-see events.

I’ve always loved them too. Because we don’t drive in endless loops road courses are more reflective of real world driving skills. I ‘m impressed by just about any race car driver but especially those that can maneuver twists and turns at speed. But then again, I like stock cars. Do you know if NASCAR has any plans to race them?

Back in the day I found road course’s amusing & a refreshing change but almost always entertaining…The last few years they have been the best racing(Dull D & Downforce) we’ve seen annually & am looking forward to this weeks event…Still don’t get how the fans had Great Reviews(first I remember in years) after Kentucky (which was always one of the Dullest D’s besides Chicago) & two days later brian told us we wanted to see “pack racing” (Kentucky looked like actual Racing to me) ..So we all got to see the action? at Indy & really dulled it up (great strung out finish) with the fuel mileage (from lap 1) event with No closure in the corners at all..Didn’t think the late caution for Brad K’s error was a big deal (as compared to fluid or a car on the track) as Brad could have been assisting a fellow Ford driver or teammate ,being as he had in the previous Truck race ..Was also (I usually defend Brad) very disappointed that is every one ok was question 7 not 1 or 2 ..Did love Wolfes response thou(“as good as they can be for some one who just got hit by a race car”) ..Best to All

Count me in as loving the road courses. For me they were always a nice change of pace from the regular tracks and now they put on the best racing of the schedule.

I agree with you, Amy. If the video is supposed to be there to support penalties, it should also be able to be used to allow that penalty to be revoked on review and if NASCAR was wrong (gosh would that ever happen?) then the team should have been allowed their spot back.

I was surprised, too, that there was no caution with 10 to go. I fully expected it and was happy that it didn’t happen. Too often, NASCAR does involve itself in the way the race finishes up for no good reason. It was nice that they didn’t do it at Pocono when the field got so spread out.

Count me in for loving the road courses. I wouldn’t want more than 3 or 4 on the schedule but for me they beat the hell out of the crapshoot restrictor plate races (even though that crapshoot can make for some compelling television).

If there was one thing good about the Pocono race it’s that they didn’t call a bogus caution at the end to wipe the fuel mileage factor out of the equation. I agree, I love seeing teams taking risks having to lie in the bed they made. Some teams made out some didn’t, but it worked out the way it was naturally supposed to. I am not a big fan of fuel mileage races but I’m less of a fan of NASCAR manipulating the race. That is why it irks me when they wait to throw a caution during green flag pit stops until everyone pits. If a caution needs to be thrown it should be, if not then eat the flag.

Nascar couldn’t justify throwing a caution in the closing laps at Pocono; there were no deadly balloons floating anywhere near the track. However, Nascar did throw another useless competion caution around lap 30.