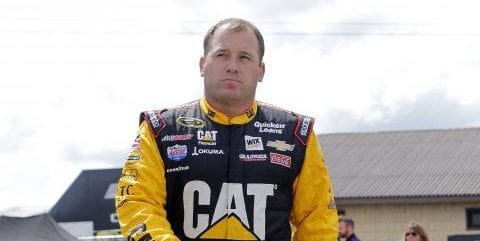 So, @JimmieJohnson has offered to take me under his wing & get me fit.My first day with his trainer. Thanks,Jimmie ?? pic.twitter.com/CDss4VUPe7

Tony Gibson has decided to change some things moving forward in his life. Gibson, who is a crew chief for Sprint Cup Series driver for Kurt Busch, posted this tweet of him working out with Jimmie Johnson’s personal trainer. With that said, everyone at Frontstretch wishes him the best of luck moving forward!

Don't miss out on the opportunity to own this race worn firesuit and help @RescueRanchNC! http://t.co/PrsutGHcQD pic.twitter.com/ali8EW1dGq

Jackman on the #2 was prepared this time around. pic.twitter.com/qXdZBAJO8F

Brad Keselowski accidently over-shot his pit box at the Pocono Raceway on Sunday during the Windows 10 400. Keselowski hit a couple of his crew members, which were uninjured in the incident. NASCAR Wonka posted this tweet, saying they should wrap themselves in bubble wrap.

Looks like I am going to be baby sitting @ClintBowyer on this trip to Canada. He has already broke into the liquor cabinet.

Jamie McMurray and Clint Bowyer shared a plane as they traveled to Canada to participate in a Salmon Fishing Camp. McMurray posted this hilarious tweet, saying he will be watching Bowyer real closely on the flight. Let’s just say, this was probably even better in person.

Bowyer had a little problem during his flight with McMurray. Bowyer wanted to play something on his phone but had nothing to amplify the sound with. So Bowyer being the person he is, found a solution with two red Solo cups. Judging from the looks of it, it didn’t work too well.

Just saw a commercial that spawned a business idea. I will make http://t.co/Bxm2HUJl3O a premiere dating site. #nascar

It appears that NASCARCasm has found a new type of dating site. The new site would be called SpottersOnly.com that would allow spotters a way to find their other half. Let’s just say, this probably will not happen!

I thought the @Aquafina car that @kaseykahne ran this weekend was very well done. One of my favorites this season. pic.twitter.com/h7MGlWI6Rw

Dale Earnhardt Jr. expressed his love for Kasey Kahne’s paint scheme over the weekend before the race at the Pocono Raceway. Earnhardt posted this photo, saying the car design is one of his favorites. Things like this are not said by other athletes in other spots.

Please tell me the speed limit is not 24 mph. #nascar #sarcasm https://t.co/B6AVSO5yT3

Construction completed last week on a new expressway named after Jeff Gordon. Jon Edwards, who is Gordon’s public relations person, posted this photo of one of the highway signs. Bob Pockrass, who is a journalist for ESPN, replied to this tweet, hoping the speed limit isn’t 24 mph. The Las Vegas Motor Speedway lowered their speed limit down to 24 mph. during their during their race weekend in March.

Kevin and his son Keelan Harvick had some fun yesterday at the driving range. Kevin posted this video of his son hitting golf balls on his Instagram page. This is one of the cutest posts that you’ll ever see posted by an athlete.

Part of a promotion for Ford Performance, Joey Logano put some moves on some bad guys. Logano participated in an action movie trailer shoot by Ford Racing. The No. 22 Shell/Penzoil driver posted a sneak-peek video on his Instagram page.