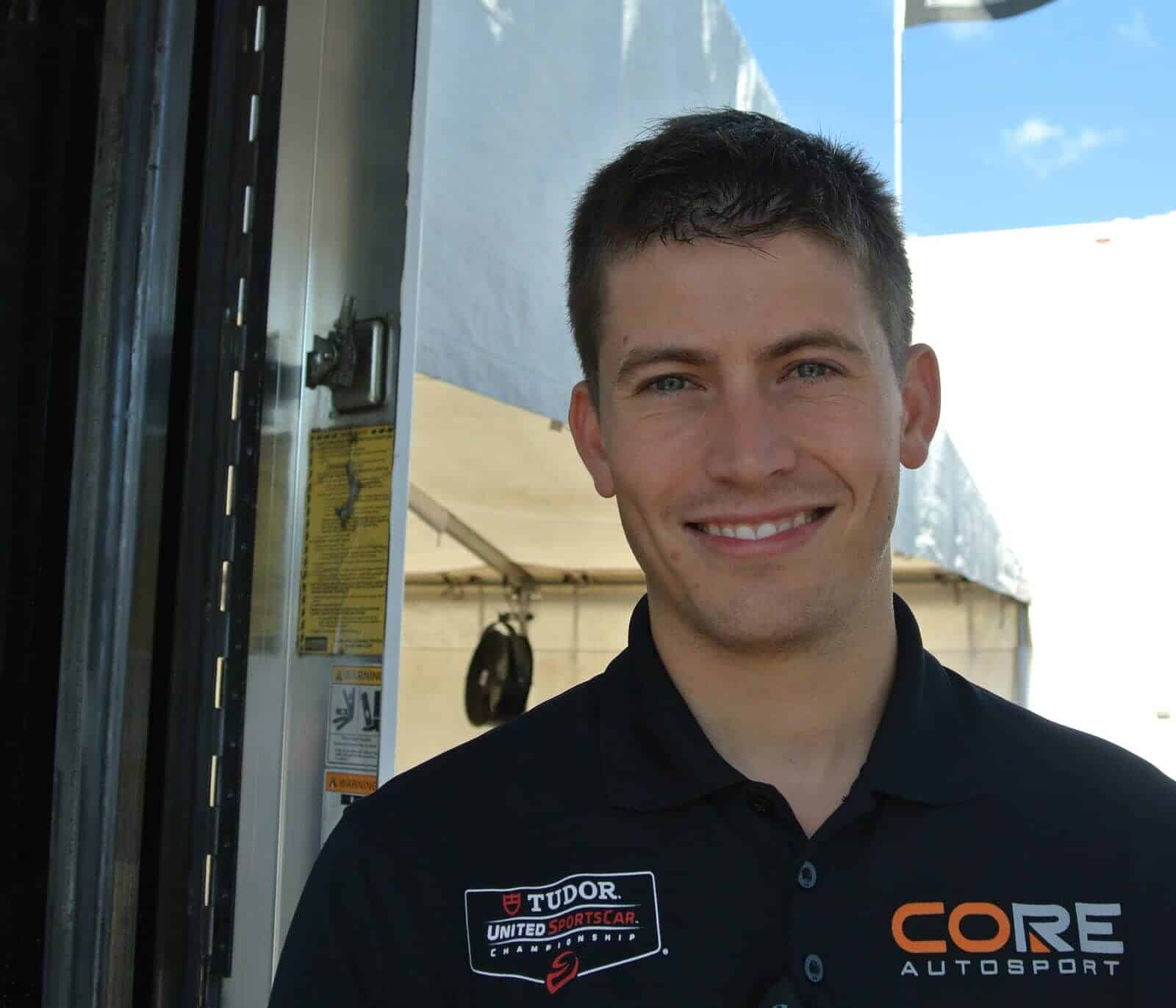 By the standards of nearly every form of motorsports, Colin Braun is a young man at age 26, however, despite only being 26, he already has a decade of experience in the upper levels of racing. For sports car fans, their first glimpse of Braun was back in 2005 when he was part of Team16, a special team that consisted of three 16-year old up and coming racers. Joining Braun and the veteran racer/driver coach Ross Bentley were future Xfinity Series racer Brad Coleman and eventual Star Mazda standout Adrian Carrio. Finishing seventh in GT for a debut was considered to be quite an accomplishment at the time.

By 18, Braun was a development driver for Roush Fenway Racing who made his Xfinity Series debut at Circuit Gilles Villeneuve in Quebec. After part-time outings, Braun moved to the Camping World Truck Series full-time with primary sponsorship from Con-way Freight. Despite the typical crunching of sheetmetal that comes with a rookie, Braun eventually settled into a nice groove, picking up a victory at Michigan and finishing fifth in the standings.

Then, everything fell apart. Roush Fenway Racing decided to go a different direction, putting Braun and his team out of work. Eventually, he gravitated back to sports cars, landing with CORE autosport in what was then the American Le Mans Series.

Phil Allaway, Frontstretch: This is your fourth year with CORE autosport. So far, it’s been quite the fruitful relationship. How did this deal first come together for you to join the team?

Colin Braun, No. 54 Flex-Box ORECA FLM09-Chevrolet: For me, I was just out of my NASCAR stuff and looking for a home back in sports car racing. Met up with Jon [Bennett, CORE autosport owner/driver] and Morgan [at] Petit Le Mans in 2011. I knew they were local; I was living in Charlotte and they were down in Rock Hill. They told me ‘Hey, you should come down and see our guys.’ I went down and visited them at the shop. Next thing you know, I’m driving for them. The rest is history.

Allaway: For most of your time at CORE autosport, you’ve driven with Jon [Bennett]. Do the two of you have similar driving styles?

Braun: Jon and I do have similar driving styles and we really enjoy working with each other. Lots of times, you may have a teammate that has a totally different style than you do. For us, we’re fortunate enough that what Jon likes, I like. I think that’s part of what’s made us as successful as we’ve been.

Allaway: It also helps with setup.

Braun: Massively. Our engineer has an easier time because he almost has to only make one person happy. If he can make one of us happy, we’re both happy.

Allaway: So far this year, you’re leading the points. However, it hasn’t seemed to be anywhere near as easy as last year looked. How would you describe the season to this point?

Braun: I think it’s been a good season for us, all in all. The bar is set pretty high expectation-wise for us being as successful as we’ve been in the past. I feel like it’s a tough deal since the expectations are so high, but we haven’t changed our process. We haven’t changed anything that we’ve been doing; we’re just going out there and racing like we have the last couple of years and having good success.

Obviously, we’ve got a lot of second-place finishes (Daytona, Sebring and Mazda Raceway Laguna Seca). We won last time out at [Canadian Tire Motorsports Park]. We’re leading the championship, so it’s hard to complain too much about it.

Allaway: Has the competition gotten tougher this year, even with the smaller lineup?

Braun: I don’t know if it’s gotten any tougher, per se. I think this class has always had a lot of very competitive cars. We had a good string of races last year, winning quite a few. This year’s not over. There are still opportunities for us to win more races. It doesn’t take a lot of bad luck to not be as successful as we’ve been in the past.

Allaway: We’re in year No. 6 of the PC formula and there’s a lot of questions going forward. Where would you like to see this class go?

Braun: That’s a good question. Obviously, I don’t get to make those decisions or choices, but I like [the ORECA FLM09-Chevrolet]. It’s a great class [and] I think it’s a really strong car. It’s really a lot of fun to drive. We’ll see where it goes going forward. I think if we could get a clearer picture of what the future is going to be, I think you would see more people jumping back onboard. There’s a lot of wait-and-see mentality at the moment with all the classes, really. Once we have a clearer picture of what it’s going to look like going forward, I think we’ll see a lot of people come back to this class. It’s just about getting customers and people excited about coming back and racing the PC class. We’ve seen a lot of guys in this class go to other places. Who knows what they’re doing and how happy they are, but if this can shine back through, I think it can bring people back.

Allaway: Even though the PC class is a spec class, it’s still a very quick class. You’ve mentioned that the car is fun to drive, but how do they really drive?

Braun: They drive really good. They make so much grip. They’re a little lighter than the P-class cars. We’ve seen a lot of places where we’re pretty close time-wise to the P-class cars. You’re in a great spot. It’s a lot of fun, a lot of grip, carbon brakes, and lots of downforce. It’s just a blast to drive.

Allaway: There were a number of rule changes that came into the class as a result of the ALMS-Grand-Am merger. The carbon brakes were one of them. How did that change how the car drove?

Braun: They did a few smaller changes. I think we have a little bit more power than we did back in the ALMS days. They’ve also done some aerodynamic changes, but nothing too massive. It’s kind of the same fun old car that we’ve always had. It’s nice for us since we have a lot of experience; we have a thick notebook of experience with the car, so that’s convenient.

Allaway: Can you talk a little about the transition from sports cars as a teenager to NASCAR as a 20-year old?

Braun: It was definitely a tough transition to make. It was so different. There were so many things to learn; so many things to try and figure out that made it a challenge. The biggest thing for me wasn’t really driving the cars. It was more figuring out the racecraft of the NASCAR stuff. Those guys have had so much experience wheel-to-wheel, side-by-side, and all the stuff with the aerodynamics in the NASCAR world that I had no idea [about]. That was the biggest thing for me.

Allaway: After 2010, you more or less transitioned back into a lighter vehicle, but that was an open-top prototype as opposed to the DP (Daytona Prototype) that you drove in Grand-Am. Was the transition back easier for you?

Braun: Yeah, coming back to sports cars was easier because that’s what I had been doing for my career and growing up with the road-course stuff. It definitely made it a little more straight forward for me. It was coming back to something that I had done a lot in the past.

Allaway: Prior to leaving NASCAR, you ran full-time in the Camping World Truck Series for Roush Fenway Racing. At first, it was a bit of a baptism by fire, but by the end of 2009, you had the victory at Michigan. You had full sponsorship from Con-way Freight, then all of a sudden, it’s gone. Can you describe your mindset at the time?

Braun: It was obviously quite a bit on the disappointing side at the way the economy was going, but it affected so many different parts of NASCAR at that time. It was obviously disappointing for me, but I really felt disappointed for all the people at Roush Fenway Racing that were there as mechanics, crew chiefs, car chiefs. There were so many people that ended up losing their jobs because the whole NASCAR paddock downsized. That was tough. The numbers got so big to go do full seasons that no one could find any sponsors that could support that level of commitment. Disappointing, but at the same time, I like coming back here, going back sports car racing, running up front and winning races.

Allaway: Do you still get contacted for potential one-off [NASCAR] races, like Mid-Ohio for the Xfinity Series?

Braun: Yeah. I had the opportunity to do some of those one-off road courses, but for me, I’m not going to go drive something that I can’t win in. I don’t have much interest in going to drive a mid-pack or start-and-park sort of operation. I want to go to win the races and that’s all I’m focused on. The schedules don’t align well on the sports car side of things versus the NASCAR road-course side. It’s a bit of a disappointment, but you never know what will happen.

Allaway: I know it was a bit off the pace, but what did you think about the LMP3?

Braun: It was an interesting car to drive. Obviously, it was a little bit of a tough test because we came out of driving our PC cars, which we’ve worked on, refined and gotten right where we want them. Then, we jumped into the P3 car right off the bat, not having the chance to truly get it set up or adjusted to our liking. It made it feel uncomfortable just because you weren’t used to it.

We’ll see where it goes. I think that it’s still a relatively new car. It needs some good development and tuning so that it can be dialed in.

Allaway: My understanding is that it’s down on horsepower, but that’s its apparently upgradable (according to SportsCar365.com) to 530. I think it would need every bit of that to make the car competitive and put it up to the speeds that you’re at now.

Braun: They definitely have to find some lap time in that car to get it up to the level that the PC cars are at. I don’t think it’s necessarily unachievable, it’s just going to take a lot of expense and development to get it dialed in. Honestly, I don’t really know what’s wrong with the PC cars that we have now. They’re quite quick and competitive cars, so I’m a big fan of what we’ve got now.

The next race for Braun and core Autosport is Sunday’s Continental Tire Road Race Showcase at Road America. The race will air live on FOX Sports 1 starting at 3 p.m.