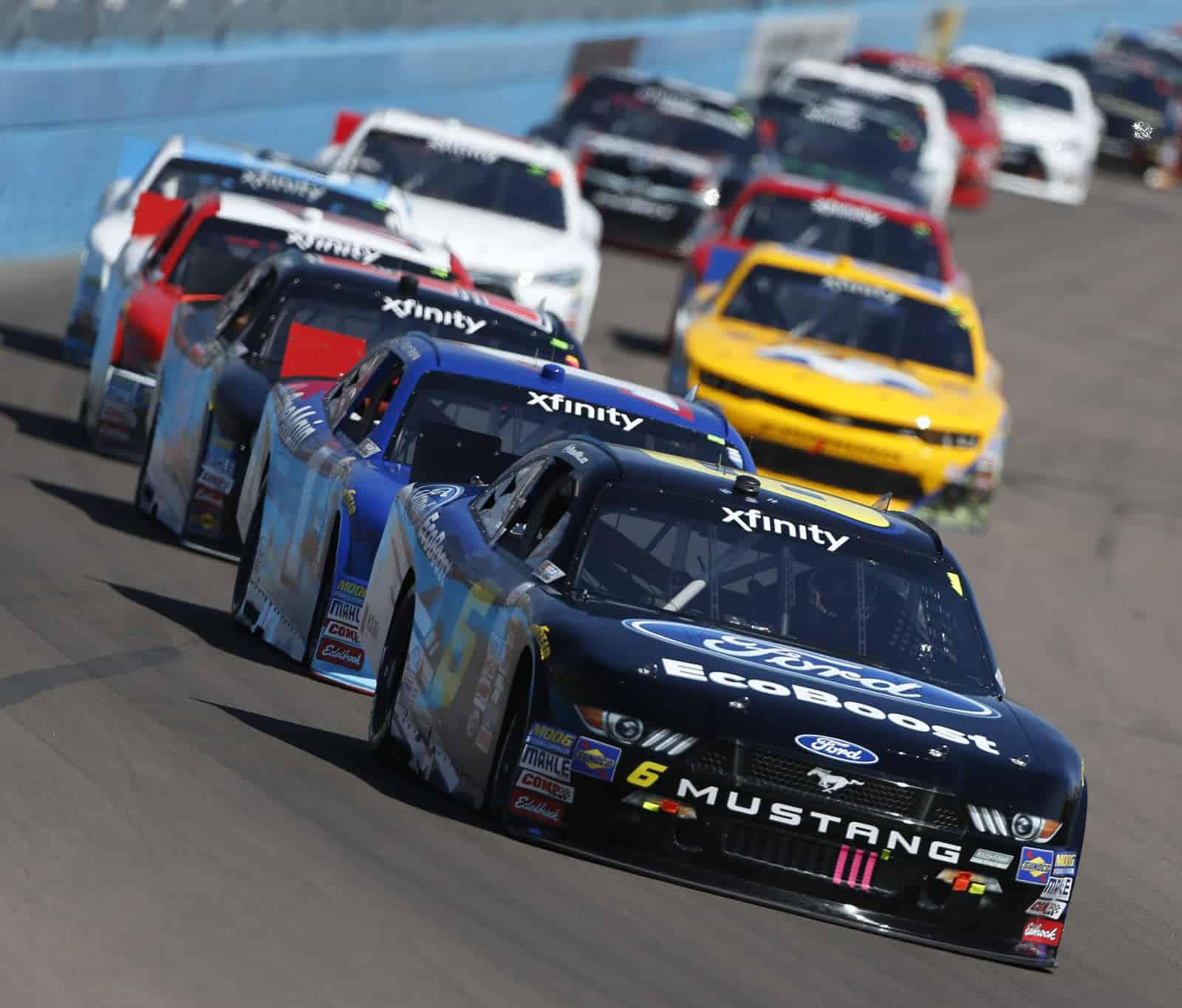 How the heck is this happening? Roush Fenway Racing is supposed to be one of the most stable organizations in all of NASCAR, but chaos has erupted at the multi-car team that is known for dominating the NASCAR Xfinity Series.

It’s like the perfect storm, really. Teammates clashing and drivers vying for a ride for next year with limited funding. One driver is a veteran, likely moving on after this season. One has a sponsor and seems content with his ride. The other two? Well, they are really creating an uproar with the only multi-car team for the blue oval in NASCAR’s second-tier division.

How did things get so bad for this team? Why would teammates yell at each other after a race? Obviously it has happened before, but when two guys under 23 years old have a dispute on and off the racetrack while driving for the same team in their first season together, something needs to be done.

After a standalone race at Iowa this past weekend, Darrell Wallace Jr. and Chris Buescher were at it again. Yeah, again. And even the normally calm Ryan Reed went after Ross Chastain Saturday night after the duo got together on the final lap of the race.

With two laps left in the race, Wallace and Buescher collided once again, which led to Wallace spinning out and Buescher receiving a decent amount of damage to his car. Buescher currently leads the championship standings entering Watkins Glen by 20 points ahead of Chase Elliott, with Wallace sitting sixth in the standings.

“He’s racing,” Wallace said after the race. “We’re racing hard. That’s it. Nothing to it. I just told him good job and we’ll go to Watkins Glen.”

Buescher commented, saying he had “nothing to say,” which isn’t like him for those that have spoken to him. The lack of words for both drivers are not acceptable, and I’m positive team co-owner Jack Roush is not too pleased.

But why is it happening? Why are two extremely talented drivers getting angry at each other instead of working together?

Well, RFR has three Cup Series teams, two of which are struggling mightily with one performing slightly below expectations to put it nicely. Ricky Stenhouse Jr. has eight sponsors and a contract expiring in 2016, while the veteran of the team, Greg Biffle, also has a contract running through next season. The driver struggling the most with the organization, Trevor Bayne, has full sponsorship until 2017 and is probably waiting out the changes at Roush so he can prove he has what it takes to succeed as critics tear him apart this year.

An opening for a fourth car in 2016, along with the possibility of one or more drivers losing a ride with the team has left these young drivers with a lot on the line. Not only are the Cup Series drivers looking to keep their rides – or at least be impressive enough to earn another top-tier job – but the NXS racers for RFR are hoping that an opportunity will come to put them in a Cup car. After all, it is their dream come true.

For Buescher, that dream came true earlier this year when David Ragan left Front Row Motorsports to fill a ride left vacant by Brian Vickers, who is on medical leave. He was extremely impressive in his first five races, putting a sub-par car inside of the top 25 four times. The strength of having him behind the wheel has led to an opportunity to run the No. 34 Ford again at Watkins Glen. He’s the lone driver from the trio of talent in Roush’s NXS stable to race NASCAR’s premier division, and it will probably pay off soon.

However, none of the three drivers, other than Reed, have a major primary sponsor. Buescher and Wallace have slapped the Roush Performance Parts logos on their cars this season, along with Cheez-It, Fastenal, Bit-O-Honey, Zest and a few others. The inconsistency is nothing new for Roush’s development drivers, though. After all, Stenhouse won a title with blank quarterpanels for the majority of the 2011 season.

But with the possibility of expanding at RFR, these drivers are in a place where they need to succeed, and it appears as if Buescher is next in line to get the call. If the team doesn’t want to expand entering 2016, there is always the possibility of creating a larger alliance with FRM, giving Buescher a respectable ride for his rookie season in the Cup Series. The same can be said about the other two drivers, but at the end of the day, this perceived competition is the source of Roush’s problems.

Elliott Sadler joined the team during the offseason, and he was really looking forward to reuniting with Roush, the organization he worked closely with for the first few years of his Cup career. The veteran of the is on the move, however, and will join JR Motorsports in 2016, according to Motorsport.com.

The move is surprising for a number of reasons for the three-time Cup Series winner. Sadler joined the team in an effort to get acclimated with Ford after a rather unsuccessful run with Joe Gibbs Racing. He has sponsorship, and that could have led him to the Cup Series.

Without a veteran driving for the organization next year unless something wild happens to bring one over, you are looking at a rather talented but inexperienced RFR team. Sadler has brought over the consistency mindset, which seems to have helped Buescher this year. He loves being a teacher, and moving to JRM probably isn’t the worst idea since two of its drivers are contending for a title.

So what does the future look like for RFR?

Expect Buescher to move up to the Cup Series sooner rather than later. After multiple interviews with me this year, he has stated that no plans are in place for 2016, but he hopes to race in Cup. As for Wallace, he’ll be in NXS once again as long as sponsors start to appear on his No. 6 car. Reed could be a sleeper to get some races in the Cup Series next year, which would be a good situation for him as the team evaluates his potential. Roush will likely start to bring one of its development drivers into the Xfinity Series, such as Kyle Benjamin. Don’t be surprised to see a driver like Michael Lira work his way into the Roush stable, too, especially with funding and an existing relationship with the team.

Right now, the focus needs to be on helping Buescher win a title. The other drivers seem rather out of the title hunt unless they start winning races. But perhaps the more pressing issue is that the hostility at RFR needs to stop. Now. It’s ridiculous and creating a distraction for the entire team, which has hampered the results more than the organization seemingly realizes for the past few years at the Cup and NXS levels.

I have no idea what’s behind the hype of Ryan Reed. He is terrible, and I don’t want to hear about his crapshoot win at Daytona. Why would anyone expect him to be in a cup car anytime soon? Oh wait a minute he won an ARCA race a few weeks ago…with cup level equipment.

As for sadler, let’s talk about a perennial underachiever. He has been with Gibbs, Childress, and now Roush in the busch series and has done nothing. A few top 10’s here and there? Whoo time to get excited. This is a guy who was expected to compete for championships in the cup lite series. Oh and he calls people “stupid” for complaining about cup drivers in the minor leagues dominating the series, yet he can’t beat them nor even come close to doing so.

The emphasis on sponsorship is interesting. Having allowed the series to become little more than a practice session for the next day’s Cup race interest has diminished arguably to the point of no return. Sponsoring an Xfinity team provides about as much exposure as putting billboards on the bottom of busses. Nobody sees it. With the series in need of serious attention, NASCAR in denial, and the racing press playing let’s pretend look for sponsors to race the remaining fans to the exits.

Which do you think is the worst investment – (a) a backmarker Cup team (b) a truck team or (c) an Xfinity team?

I’d say they are all bad investments and would not put a dime of my own money in any of them. If I had to choose I would guess that truck, followed closely by Xfinity would be the worst possible investments as each provides almost no exposure. Though still a bad investment at least a back of the pack Cup driver can occasionally get caught in the TV shot with whatever Cup star is being jock slobbered by the booth. To reiterate, I’m a retired public servant so at least I know that I don’t know anything about business. Don’t be shy in pointing out the flaw in my reasoning. Honestly, I am baffled as to why any business would invest in NASCAR at present.