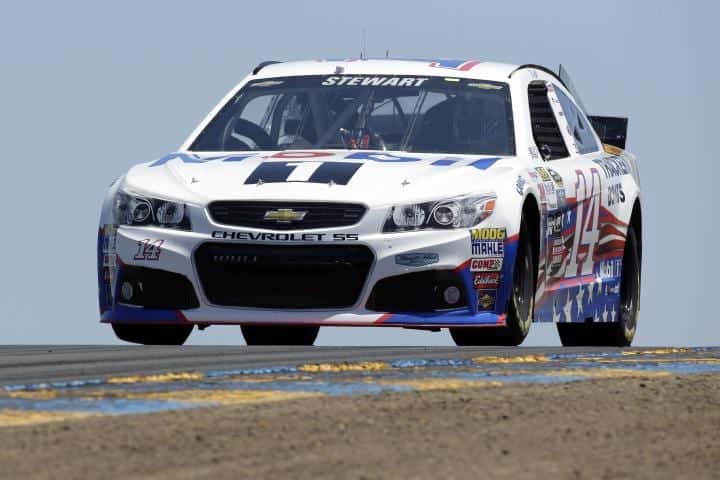 Right-hand turns are on tap for this Sunday as the traveling circus that is the NASCAR Sprint Cup Series heads north to Watkins Glen International. The world-famous 11-turn road course has been a lightning rod of drama for the series over the past half-decade, and as such, there is a higher-than-normal buzz for the race as we enter the weekend.

Watkins Glen is a wild-card race of the highest order, as road racing is an equalizer for the series much in the same way that the draft is at places like Daytona. With the right strategy and a little luck, any number of drivers could win on Sunday and lock themselves into the Chase.

As you can imagine, we have much to cover this week, so let’s dive in, shall we?

1. How will Tony Stewart fare in first Watkins Glen race since 2012?

By all accounts, Watkins Glen is Tony Stewart’s best track. There is almost no statistical argument that can be made against this statement. In 14 starts, Stewart has a gaudy five wins and 10 top 10s at the facility, and for many years was considered to be the best road racer in all of NASCAR.

But despite all the success Stewart has accrued at the Glen, the facility is also a reminder of some of his darkest days. In 2013, Stewart missed the race after suffering a season-ending leg injury one week prior in a sprint car race. Then Stewart missed the 2014 running of the event due to his involvement in the Kevin Ward Jr. tragedy, which occurred the night before the race.

Stewart now enters this weekend with the goal of trying to put the past behind him. It certainly wouldn’t be unfair to say that Watkins Glen is a symbol of sorts for all that has gone wrong in Stewart’s life over the past three years. For that reason and that reason only, a strong run, or, could you imagine, a win this weekend would unquestionably do wonders for Stewart’s morale. Conquering the track that has become forever entangled with personal tragedy could very well be the one thing that puts Tony Stewart back on the road to success in racing.

Should he pull through and deliver a strong run on Sunday, it would be undoubtedly be the feel-good story of the year, and could possibly even exorcise the remaining demons that haunt Stewart’s mind.

2. With Marcos Ambrose gone, is this AJ Allmendinger’s race to lose?

During his tenure in big league American stock car racing, there was no better road racer in the sport than Marcos Ambrose. Ambrose led more laps and collected more top-five finishes than any driver during the course of his Sprint Cup career, and was the undisputed favorite to win every time the series visited a track with right turns.

Now, in 2015, Ambrose is a year removed from his departure from the Sprint Cup Series. In his final road-course race, the 2014 Watkins Glen event, he was beaten straight-up by another road-course expert, AJ Allmendinger. It was a passing of the torch of sorts, as Allmendinger had slowly been perfecting his Cup Series road-racing acumen while Ambrose reigned as right-turn king.

Now, Allmendinger enters the weekend with big expectations and a boatload of pressure. This Sunday’s race is almost certainly Allmendinger’s only chance of making the Chase, and with the newly added pressure of being the proverbial favorite, he is in for a challenging weekend. Can he actually live up to his reputation and seal a Chase bid for his No. 47 team? That’ll be a story that likely stays relevant all the way until the checkered flag falls on Sunday’s race.

3. Will wackiness once again alter the race?

Hard racing, large wrecks and big-time drama have become hallmarks of the racing at Watkins Glen over the past half-decade, and it has quickly become a fan-favorite destination on the circuit. A combination of factors have helped the Glen become one of the most intriguing facilities in the sport. Grippy high-downforce cars, double-file restarts and increased road-racing competency on the part of the drivers have all been factors in the sudden elevation of excitement at Watkins Glen, and that is all expected to continue in full on Sunday.

But of course, plain ‘ol hard racing has not been the only factor in the high level of drama seen in upstate New York over the past few years. For whatever reason, Watkins Glen has been memorable for having unusual circumstances alter the course of the race seemingly every year. In 2012, oil on the track went unnoticed by NASCAR in the final laps of the race, leading to a slip-and-slide duel between Brad Keselowski and Ambrose on the race’s final lap that will be remember for years.

Last year, a series of incredibly unusual accidents led to multiple red flags needing to be thrown.In fact, even going back to 2008, strange wrecks, weather anomalies and other sorts of general weirdness have impacted the races at the track seemingly every year.

Could the 2015 race see more of the same? There’s actually a compelling reason to believe it could. For the first time ever, NASCAR is allowing the teams to run in the rain on road courses.

That means if it rains on Sunday (and there’s roughly a 20% chance that it could), we could see the first ever wet weather Sprint Cup race in the sport’s history.

4. Will clarity be found with the Michael Waltrip Racing situation?

Last week, everyone in the NASCAR world was buzzing over the news of MWR co-owner Rob Kauffman’s intent to purchase a stake in Chip Ganassi Racing’s team. The news obviously has left MWR in limbo, as no one quite know what is going to happen to the team over the next year and a half. Some think MWR will essentially be merged into CGR, others think Furniture Row Racing will absorb the No. 55 car. Seemingly everyone has a unique take on what they think will happen to the team.

The truth is, we really don’t know what is going to happen.

What we do know, however, is that Kauffman has made it clear that if MWR can either win a race or make the Chase before the end of 2015, it could end up being the difference in the team exisiting or not after this season, at least in its current form. Given that Watkins Glen is by far the team’s best remaining track on the schedule, this could be it for everyone at MWR. If David Ragan or Clint Bowyer can clinch a miraculous Chase berth with a win, it could completely shake up the fabric of silly season, and I believe that Sunday is their only real chance to pull it off.