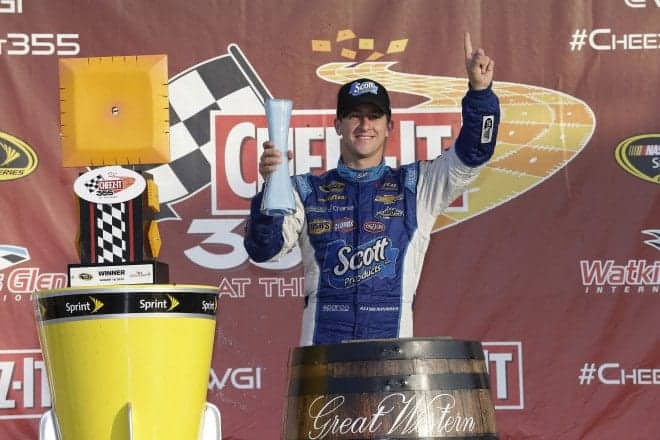 Will AJ Allmendinger be a legitimate threat in the Chase?

There was a point in time in NASCAR’s not-so-distant past when the road-course races in the NASCAR Sprint Cup Series were quite the ambiguous affair – and not just because they’re among the few races in which the drivers actually have to turn right at a high speed. Then, the entry lists were dotted with what we came to call road course ringers – racers who were not normally part of the series circuit and were considered technically proficient at the tracks, sometimes at a higher level than the Cup regulars.

My, how things change.

This weekend, the Cup Series travels to Watkins Glen, marking the second and final road course of the 2015 season, following Sonoma Raceway this spring. And much like Sonoma, there’s but one driver on the entry list who fits the ringer bill: Boris Said, who, it should be noted, hasn’t finished inside the top 10 in a Cup race since 2010 and whose average finish hasn’t topped 20th this decade.

Aside from Said, there is only a handful of drivers who haven’t been competing in the balance of the Cup schedule, including Timmy Hill, Michael McDowell, Chris Buescher, Alex Kennedy and TJ Bell, the latter attempting his first series start since 2012. But none are considered ringers, certainly not in the way Said is or was.

The fact that Said has been the only ringer in sight this season seems to indicate one thing: ringers in NASCAR — at least, NASCAR’s Cup Series — are no more.

Because if you check out the Xfinity Series entry list for this weekend, you’ll find a slightly larger amount, with drivers like Kevin O’Connell and Kenny Habul added to the roster. That’s just for a companion race, too – later this season, Alex Tagliani will be among the competitors. The Camping World Truck Series event up in Canada tends to draw its share of road-course specialists, too.

What became of the days when Said was joined by drivers like Ron Fellows and Dorsey Schroeder, racers who even had their share of near-wins in the series?

Couple reasons. For starters — and this is most important — the full-time drivers got better. You have folks like Jeff Gordon, Kyle Busch and even Marcos Ambrose and AJ Allmendinger. There are also less racers who seem like complete and total losses when it comes to attempting a right turn; the general skill level has risen.

So there’s no reason, oftentimes, for a team owner to toss in a Scott Pruett or a Mattias Ekstrom into their car for the weekend when their usual driver can get the job done, even if it’s not a win. Remember: even though the ringers were often good for a solid finish, many also crashed out trying to get there. Lower risk? Perhaps.

Give a call to the current sponsor situation in NASCAR, too. It seems businesses are less likely these days to sign off on having their name and logo plastered on the car when their usual driver isn’t in it. That’s especially prevalent now that sponsors are sometimes coming with drivers, signing with the team in question only because their guy or gal is in the leading role. Even if Jimmie Johnson was a deplorable road racer, chances are Lowe’s wouldn’t sign off on a replacement driver for the weekend.

Oh, then there’s the Chase.

Even if the general NASCAR populace hadn’t become better at this kind of racing, once the Chase began awarding wins and nixing those who don’t run the full season, it was game over for ringers when it came to getting an upper-tier ride. A team isn’t going to slot into the Chase if a part-timer somehow ended up in Victory Lane, unless it was already in via some sort of NASCAR-approved exception. Even if an organization that’s somewhere around 30th in points has a driver who isn’t worth a damn at Sonoma or Watkins Glen, taking him or her out of the seat for no other reason other than, “Um, he/she’s kinda terrible at this, so we got Boris Said instead” isn’t going to help if that driver ended up pulling off a shocker at Richmond.

These days, there are only a few scenarios a ringer like Said has to get a ride at one of the Cup road course races. There’s the usual route he’s been taking lately: signing with a team like FAS Lane Racing, a ride-buying organization that fields multiple drivers throughout the season and isn’t concerned with making the Chase as a result. He/she could also score a ride as a replacement due to injury or other circumstances to the primary competitor — think Max Papis replacing Tony Stewart at Watkins Glen in 2013. A last option is an extra part-time team fielded by one of the better organizations (Chip Ganassi used to do this), but in a NASCAR age where such excess seems out of the question, don’t bet on it.

If you’re hankering for a time when lesser-known names (at least when it comes to NASCAR) could run with the big boys at the road courses, absolutely check out this weekend’s Xfinity Series event at Watkins Glen, as well as the races at Mid-Ohio and Road America that dot the remainder of this month – not to mention this month’s Truck race from Canadian Tire Motorsports Park.

Otherwise… hey, root for Boris Said if you’d like, but otherwise, Cup Series races at road courses are just like any other races, really.

You know, aside from those right turns.