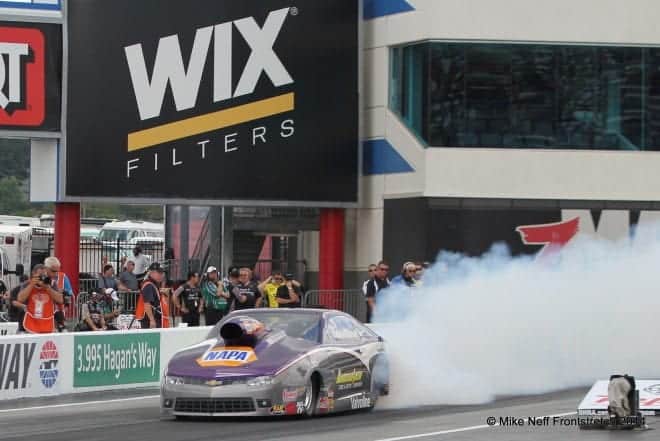 Since the tenure of new NHRA President Peter Clifford began last month, big changes have begun to roll out for NHRA with the new TV deal and most recently with the Pro Stock category rules. As previously discussed, the new television deal is a big opportunity for NHRA.

Follow comment threads and social media posts and it’s clear that Pro Stock was a category that needed some scrutiny and consideration. There were lots of grumbles about how it had become a joke and was not really stock anything. Maybe it’s only those who are unhappy that complain in such places, but if you go to the track, you also notice an exodus of a good portion of fans after the Nitro classes end and before Pro Stock takes to the track. NHRA sees these things too and is making an effort to address the issue.

As far as the pit changes, parking the cars nose out and leaving the engines uncovered, there’s nothing for fans not to like about that. As for the proposed change to fuel injection next year, one very interesting note here: NASCAR changed to fuel injection a few years ago in order to make the cars more relevant, more stock if you will, because fans drive cars with fuel injection, not carburetors. Competitors at the time complained about the costs, having to change, potential problems, etc., and other than a small handful who had some small growing pains, the change went over just fine. No one even thinks about it anymore, but the end result is cars that are more relatable to fans.

Pro Stock is supposed to be the factory hot rod class. Granted no one is getting anything remotely like those cars from a factory, but NHRA is making an effort to bring them more in line with the spirit of a factory car, just as NASCAR did. No one is actually driving anything like a NASCAR Camry stock car on the street either, but at least it’s a little closer somehow.

Change is a natural thing though at the end of the day, whether people like it or not. It might seem radical but if there were no changes, teams would still be racing the same cars with the same rules they had 50 years ago. That’s not the case and that’s not always a bad thing.

What do YOU think of the Pro Stock changes?

2014 – Two wins in nine final round appearances; six time No. 1 qualifier; made Countdown for the seventh consecutive year.

2006 – Led points for the last 10 races of the season before finishing second; scored five wins in five final round appearances; two time No. 1 qualifier.

Some things most people don’t know about Doug: Doug also has a day job as president of Kalitta Charters. He loves to fly and earned his Learjet license at age 21. We all know Doug can drive really fast in a straight line, but he’s pretty good at turning too as he was the USAC national Sprint Car champion in 1994.

Look for Kalitta to be featured in an upcoming edition of Off The Wall With… on Frontstretch on Saturdays!

When Larry Dixon had his wild wreck earlier this year in Gainesville that saw his Top Fuel dragster get airborne and snap in half, the guy in the other lane at the time was Kalitta. Doug talks about what it was like from his point of view in today’s crazy thing.

If you need a refresher and would like to see the wreck in question again, or if you just happened to somehow miss it the first time, check it out here.

“It has to be business as usual. You know, the agony of defeat, that Olympic reel they used to run, the thrill of victory, the agony of defeat. I think when you’re good at something, you’re probably good at it for two reasons: you have a passion and you practice. I have a passion for drag racing and I practice. And when you do something in your mind tens of thousands of times, you have a mental zone that you preform best in. When you change that because suddenly you tell yourself, this time it’s really, really important, you don’t have that 10,000 repetitions to fall back on anymore, you change something. So I think it has to be business as usual.” – Jack Beckman on his approach to this week’s race in Seattle. Beckman has won two of the three Western Swing races and has a chance to sweep this weekend.

The new NHRA national elapsed-time record for Funny Car, set by Beckman last Friday evening during qualifying for the NHRA Sonoma Nationals. Beckman backed up the run on Saturday with a 3.958-second pass to make the record official. This was the third NHRA national E.T. record of Beckman’s career. It also earned him an extra 20 bonus points for the weekend.

“It’s nice to be the quickest Funny Car driver ever, but I’d trade that for winning the trophy tomorrow,” said Beckman, who went on to do just that. “These moments are not lost on me. They are incredibly special. It does matter that we qualify the best, it does matter that we set low ET of the world, all I’m telling you is in the big picture of racing it’s not our main goal.”

One more stop to make on the Western Swing! This week it’s off to Seattle. It’s a time slot we should all be getting used to lately. It’s been the same for the last couple of weeks and will hold for another couple.