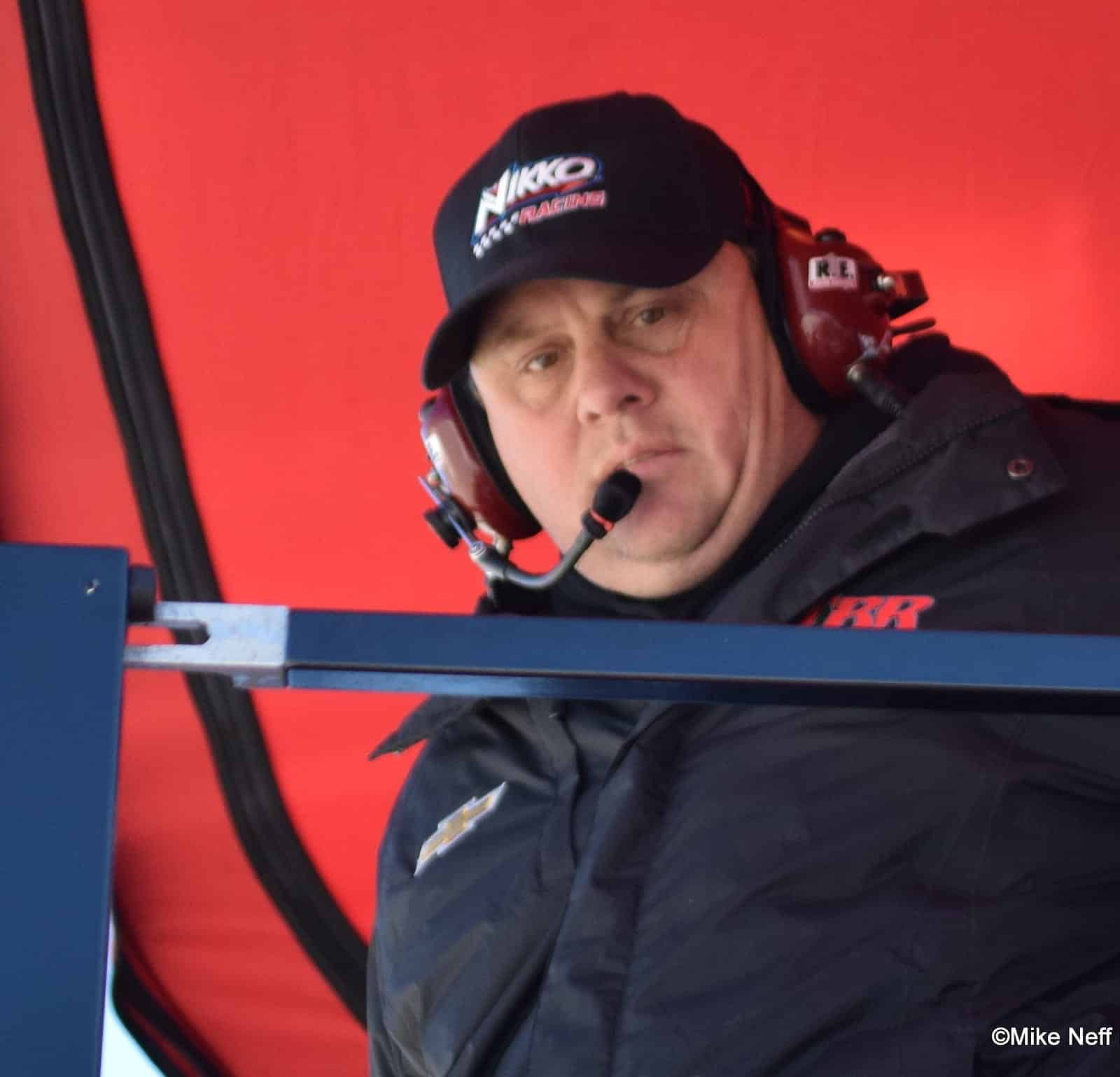 Pocono was a rough weekend for Kevin “Bono” Manion and the No. 9 Richard Petty Motorsports team driven by Sam Hornish Jr., but the veteran crew chief is hoping to put the disappointment behind his team and have a better run this coming weekend – after all, it’s a car that has won in the past at Watkins Glen.

At a track where the crew chief can make some of the biggest difference all season, Manion believes the new NASCAR engine package may have made it a little bit easier on the head wrenches.

This week in Tech Talk, Manion revisits the challenge faced when caught up in an accident that significantly damages a car on a big speedway. He then delves into setting up for right- and left-hand turns, achieving drive off of the corners on the higher speed track at the Glen, pitting in the opposite direction and the potential for racing in the rain.

Mike Neff, Frontstretch – Pocono was obviously not what you guys were looking for from the weekend. Describe the experience from your view.

Kevin ‘Bono’ Manion – It was one of those weekends that you just want to erase. When you think that everything could happen has happened, something else happens. We were on a four-stop strategy. We stayed out on the first competition caution on lap 15 and restarted ninth, went from second to first and wheel-hopped and got door-slammed. That eventually made it to where we started to have a tire rub so we were slowing down to come to the pits and got rear ended. We got that fixed and it was just a snowball of hitting things and ended up just being a weekend that wouldn’t end.

Manion – We were right at minimum speed. Some laps we were a little under it and some laps we were a little over it. With that fast of a track we thought, with the amount of laps left and the positions we could gain, the best thing we could do was clearance everything off of the front end and go out and make a few laps and see what we could make for speed. If that speed wasn’t even remotely close to minimum speed, we’d have come in and put a nose on it. That would have taken another 20-30 laps, and by that time, the race would have been pretty much over. The best thing to do there was clearance everything, put a radiator in it and go out and see what we could run for speed. It was right at it so we just continued to log laps and picked up a couple of points.

Neff – We head to Watkins Glen this weekend. There are roughly the same number of right- and left-hand turns on the course, but it appears that there are far more crucial turns that are right-handed versus left-handed. Do you have to set up for both types of turns or can you focus more on the right-hand turns and making sure those are the more successful corners?

Manion – It is definitely a right-hand-dominant track, as far as your setup. The setup is a little different from Sonoma, with the high speeds and, like you said the right hand dominance. In layman’s terms, to explain it to the fans, in Sonoma we were 50/50, with 50% focus on the lefts and 50% focus on the rights. Here we may [focus] 70% to the rights and 30% to the lefts. You still have to go left to make speed, but if you look at your passing zones, up through the esses it is very important to come off the top of the esses to get a good run and maybe peek your nose out and try and get by somebody in the bus stop.

Neff – Is drive off of the corner as important since you have more speed through the corners as it is at Sonoma?

Manion – Drive off of the corner is certainly important. At Sonoma you are taking a heavy racecar at slow speed and asking it to accelerate quickly so it is more difficult at Sonoma. At Watkins Glen, your mid-corner speed and your rolling speed is faster so when you apply the throttle it is easier to gain forward drive here. We still pay attention to it but it is not as critical as it is at Sonoma.

Neff – With the Glen being a higher-speed course, do you have to focus on reducing drag versus gaining downforce to get you through the corners?

Manion – It is strictly downforce for sure. You still need a lot of downforce on the front end to make it turn. There are really only a couple of places that are truly high speed so downforce is still king.

Neff – Since they changed the pit lane at Sonoma, the only track where teams pit in the opposite direction is Watkins Glen. Do you practice those pit stops before this week or do you focus on them just during this week of preparation?

Neff – With the speed you carry into the two or three passing zones at the Glen, slowing a heavy stock car down can generate a lot of heat in the brakes. Do you have to focus on cooling the brakes due to those few instances or are you able to cool them down just thanks to the distance between those times that you have to be on the brakes so hard?

Neff – We had a lot of discussion after Indianapolis about driver cooling with the package we ran there and the difficulty of getting air into them. Prediction for this weekend is the ambient temperature won’t be as high as it was at Indy. With the way these cars are these days, is it harder to get air in to cool the drivers down, and what do you have to do to overcome that?

Manion – This weekend that won’t be a problem. Part of the problem at Indy – and it will probably be a problem again at Michigan – is it is a very smooth track. Your nose is sealed off for most of the lap and the tail extension is sticking down farther which traps air under the car. There isn’t a lot of air movement under the car and that makes indirect heat in the cockpit. It isn’t so much getting the air into the greenhouse, it is just that there is no air going under the car, which basically turns it into an oven.

Neff – The forecast is for possible rain in the morning on Sunday, which has brought up the discussion of possible use of rain tires again. Is that something that you have to plan for and therefore defoggers and windshield wipers and all of the other rain associated accouterments?

Manion – NASCAR has made it somewhat easy on us. They have made it mandatory that we have a defogger, tail lights and a windshield wiper motor installed. With that said, we also have a list of things we will do if it rains. Speaking with NASCAR, if we are under a wet condition during the race or pre-race, they will bring us down pit road and we’ll have five minutes or so to prepare the car. The answer to the question, we will already have everything in the car we need along with the list of things from items as simple as RainX, to Ziploc bags for over the radio, to some adjustments we’ll make different for handling.

Neff – So NASCAR will bring you down to put on the rain tires. When we get back out there and the track starts to dry, do you want to see NASCAR let you make the call as to when you go back to slicks or are you stuck to when they make the call to bring everyone back down to switch back to slicks when they decide to?

Manion – The way I understand it, it is up to the individual team’s crew chief to make the call when the team will go back to slicks. I think that is the right thing to do.

Neff – It is a road course, so you know pit strategy is going to be a big part of the race. We’ve seen two stops and three stops based on working backward from the end of the race. Are the tires going to give up enough where a three-stop strategy can overcome a two stop strategy this weekend?

Manion – I think so. It is the same tire that we’ve had since 2013. With a little different aero package and little different engine package, I think you’ll see people on two stops and people on three stops. It is a coin toss on whether a two-stop or three-stop will win it. It depends on how good your car is handling on a long run. With the new engine package this year, with the tapered spacer, it puts everyone into a two-stop window easily, so I believe you’ll see more people doing that.