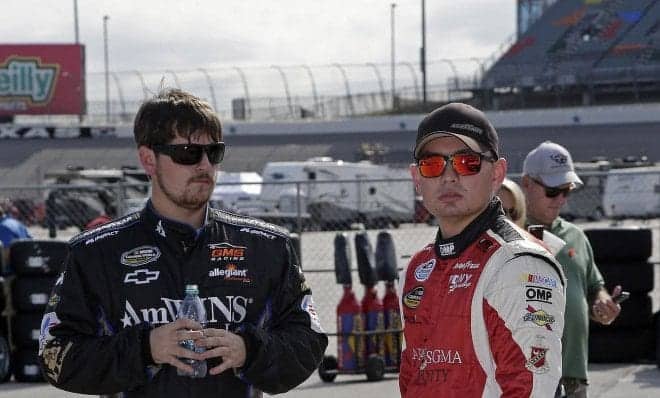 Camping World Truck Series driver Ryan Ellis is a man of many talents. From the obvious behind the wheel to spotting and even marketing and sponsorship conversations, the 25-year-old has set out to make a name for himself in NASCAR, and he’s doing it by snapping up every opportunity that comes his way. In fact, this weekend, he will be running in Saturday’s Xfinity Series race at Watkins Glen with Rick Ware Racing while the Truck Series sits dormant.

Ellis is no stranger to the family that is the racing community either. His father raced motorcycles at a young age before a shoulder injury sent him to racing cars where he ran professionally in the Sports Car Club of America (SCCA), and his grandfather raced USAC midgets in the Midwest. In fact, the third-generation driver credits his grandfather for the passion that influences him and the ability to be around the racing community today.

“It’s kind of a weird story because I never met my grandfather, but without him, I don’t know how I would have ever gotten into the sport,” Ellis said at Texas Motor Speedway earlier this year. “He raced back in the 1950s and lost his life in a racing accident in 1958. But even with that tragedy, my dad, who was born the same year my grandfather passed away, got into the sport of racing.

“I don’t know how people get into racing unless they’re born into it. I know a lot of people I race with are sons or their neighbor raced or something like that. It’s not like there’s a Little League for racing. So I have no idea how people get into this, and I don’t know if I ever would have gotten into NASCAR if I weren’t surrounded by this environment growing up. So I’d have to say my grandfather is definitely a hero of mine, and I try to continue to fill the dream that he started at the beginning of his career.”

The road to NASCAR hasn’t been an easy one, though. At the age of four, Ellis’s dad saved up enough money to buy him his first quarter-midget car, and he proceeded to narrowly miss winning his first race against children that were substantially older than him. He remained in quarter-midgets for seven years before moving on to legends cars at the ripe age of 12, where he set several records and winning multiple titles.

At the age of 16, it looked like Ellis was well on his way to a stock car career when he got a shot with a late model team that was supposed to take him to what was then known as the Hooter’s Pro Cup. But as quickly as the opportunity came up, it imploded with a bang.

“Long story short, the team promised big things and nothing came through,” Ellis wrote in an introductory diary on Speedway Digest earlier this year. “The team stole a lot of resources and sponsorship money from our family, and we ended up taking them to court.”

Fast forward to 2012, after a lot of hard work, high costs and heartache pursuing multiple branches of racing, and Ellis finally got his shot at NASCAR. With experience in road-course racing in Grand-Am, he had caught the eye of Jimmy Means, owner of Mean Racing, who asked him to run for the team at Road America. Through that one opportunity, Ellis has worked with multiple teams in the last few years.

This season, Ellis has been driving for MAKE Motorsports and FDNY Racing whenever the opportunity allows. While sponsorship money has been hard to come by, 2015 has already exceeded Ellis’s expectations.

“It’s been awesome. Going into this year, just like going into last year, I didn’t know really what to expect,” Ellis said. “It’s been awesome to get an opportunity here at MAKE Motorsports and really run the full race. That’s what’s really important to me at this growing stage of my career: just to make laps and run full races and get my licensing up. I have Cup opportunities, I want to fulfill them, but I didn’t have the licensing before this year. This is absolutely beyond where I thought I’d be at this point in the year. I’m just really happy to be at the track every week.”

Away from the track, Ellis does a lot of the typical things that you’d expect a mid-20s male to enjoy. He goes to the gym and just recently joined a community hockey league to play in for fun. Ellis also enjoys hanging out with his friends, mostly other NASCAR drivers since they’re together so often every week, and if you were to steal his playlist, you’d find a list of pretty much everything, including country, hard rock, hip-hop, rap and even a little electronic music.

What are some of your goals for the rest of the season?

It’s kind of hard to tell at this point. At this point, run as many full races as I can, hopefully run full races here at MAKE Motorsports and maybe run a Cup race or two if those opportunities come around. I live this life week to week and see when I’m able to drive and when I’m not. I try to go to the track even when I don’t have a ride and network as much as possible. I have a lot of fun in the Truck Series right now, so hopefully I can stay here doing this.

What’s the most important lesson you’ve learned so far in your career?

That’s a good question. I’ve never heard that one. It’s a non-driving lesson, but I think it’s just about being out there every weekend and making yourself available. For young guys, I tell them this all the time about being at the track and putting yourself out there in any way possible whether it’s at a foundation or charity. It’s so beneficial to your career to go out there and meet new people because they might be able to help you in your career. Go visit shops, go visit team owners, tire guys, truck drivers, anybody.

All the relationships you build in NASCAR are beneficial to you. This world is so small, it really is a family. I’ve run into people that I’ve worked with at my first team and six other teams; they switch around more than I do, and I drove for like 12 teams last year. You run into everybody everywhere; you can’t burn a bridge. I had an incident last year with Jake Crum, as everybody knows, and that’s just water under the bridge now. It really doesn’t matter; you just gotta keep moving forward.

I saw that you are a marketing major. How does that help you in your search for sponsorship?

I don’t know if it’s helped me yet, but I’m hoping it helps me at some point in my career. I just feel like any schooling is obviously beneficial to you, and I push every kid I know that’s looking to get into racing to get a degree in either engineering or marketing. To be a racecar driver today, you have to be able to work on the car or tell them how to set it up or you have to be able to sell sponsorship. If you can sell sponsorship, you can drive anything.

It’s taught me how to build sponsorship proposals, but at the end of the day, I’ve learned more just by being at the track every weekend. You meet big business owners, you meet all of these successful people. Obviously if you own a team, you have to have some money at some point. It’s helped me a lot in preparing proposals. I’m stil learning a lot every time I get turned down, which is like 99% of the time, just like everybody else. It made me feel a lot more prepared getting into the industry.

If this driving thing doesn’t work out, which obviously I hope it does, then I hope I have a job on the management side or being an agent because that would be a lot of fun too. I don’t want to leaving racing one way or another.

Author’s Note: At the beginning of 2014, Ellis faced the decision of whether he should continue going to school at George Mason University, while putting his racing dreams on hold, or move forward and take the plunge of a big move to Charlotte to pursue NASCAR. A flip of the coin sent him to North Carolina.