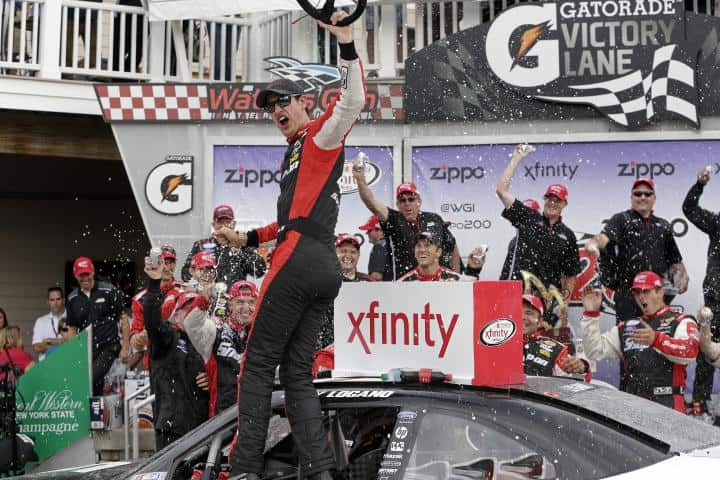 They started first and second, led nearly all of the laps … and finished first and second. It was that kind of day for Team Penske drivers Joey Logano and Brad Keselowski, with Logano taking the checkered flag first in the Zippo 200 at the Glen.

Logano’s 25th Xfinity Series victory did not come easy. After leaving his pit stall with the fuel can still attached to his car early in the race, Logano was forced to make a stop-and-go penalty. He would eventually work his way back to the front of the field, leading 39 laps and scoring his first career victory on a road course.

Keselowski came up one spot short in his quest for back-to-back NXS Watkins Glen victories. Keselowski started second to his teammate and led much of the race while Logano was fighting back from his penalty. On lap 52, it was Keselowski’s turn to get penalized, as he was too fast at the exit of pit road. He quickly worked his way back through the field, but could only get to second, finishing less than a second behind Logano.

“We both had some adversity with pit road stuff… I just made too many mistakes to beat Joey” said Keselowski following the race.

Ty Dillon finished fifth and took a messy path to get there. Dillon spun Regan Smith and his Richard Childress Racing teammate Paul Menard going into turn 1 on two separate restarts. Following the race, Smith and Dillon had a very physical “discussion” on pit road involving the two drivers and members of the No. 3 team.

Following the spin, Smith made contact with Brendan Gaughan with 17 laps remaining, turning Smith into the guardrail in the carousel. Smith would finish the race in 20th, 57 points behind Buescher.

Brian Scott finished sixth, followed by Elliott in seventh. Elliott went for a spin in the inner loop in the early stages of the race, but managed to work his way back into the top 10 and minimize the amount of points lost to Buescher. Elliott Sadler, Menard and Gaughan completed the top 10.

Kenny Habul and Ryan Reed finished 29th and 30th after the two drivers collided in turn 7 to bring out the seventh and final caution of the race. After Habul spun across the front bumper of Gaughan, Reed could not avoid the No. 20 Sun Energy Toyota and made severe contact with the front end of his car, ending both of their races.

The Xfinity Series has only just begun their road course swing, with its second road course race of the season next week at the Mid-Ohio Sports Car Course for the Mid-Ohio 200, Saturday August 15th at 3:30 p.m. ET on NBCSN.

And the NASCAR brain trust just can’t figure out why nobody watches.

Could be the “The Live” messaging all around the track via the form of little black box type signs with “Zippo” written on them. That was damn freaky and gave me a headache. I wish Roddy Piper was around to take care of all them. Rip Roddy.