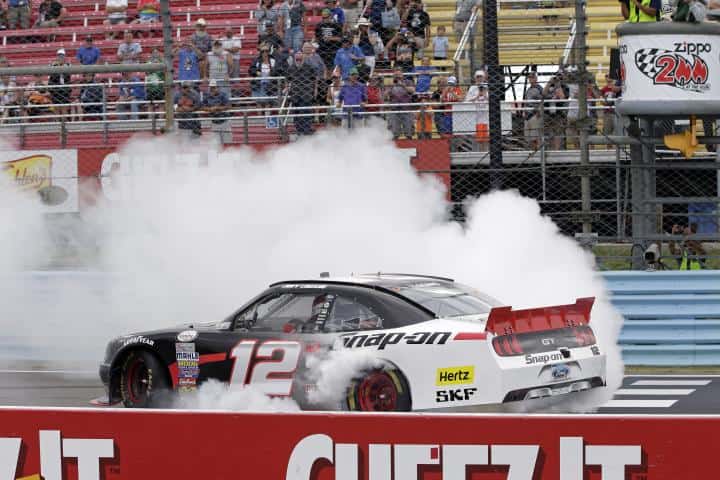 Dominance is an understatement. It’s more like destroying the competition at this point. Team Penske’s incredible 2015 season continued at Watkins Glen International for the Zippo 200, where the team brought a second car to the track for the first time this year. Well, the decision paid off for the organization.

Joey Logano took control at Watkins Glen on Saturday afternoon. Leading 39 laps, the 25-year-old held off teammate Brad Keselowski to win his 25th career Xfinity Series race in his 143rd start. While contending for the lead during the first pit cycle, Logano left his pit stall with his gas can. Almost immediately, the caution came out, forcing him to start at the tail end of the field due to receiving a penalty. However, he flew through the field, coming back into the lead by lap 54 and didn’t look back in the No. 12 car.

The victory marks Logano’s fourth of the season, and the sixth for Team Penske in 2015. The teammates took the checkered flag an impressive five seconds ahead of third-place Chris Buescher, who extended his championship lead on Saturday.

At the first road-course race of the three this summer, there were a handful of “road-course specialists” on the track. However, none were as competitive as Boris Said, who originally signed a seven-race deal to drive the No. 54 car earlier this year. But with Erik Jones taking over when Kyle Busch is out of the ride, Said is now only going to race the road courses, and was quite comfortable with that. He finished fourth, marking his first top 10 since his win at Montreal in 2010.

There were seven cautions on the day, totaling 20 laps. The race lasted two hours and 26 minutes, 16 minutes longer than last year’s event. Besides the Penske teammates, no one was able to take the lead, with the exception of Buescher and reigning champion Chase Elliott during pit cycles.

Buescher can breathe a little easier after the 82-lap race. His championship lead had decreased over the past five races, which saw the No. 60 team finish outside of the top 10 in each event. However, finishing third – the strongest of the NXS regulars – marks a turnaround for Buescher. His points lead is back up to 24 markers ahead of Dillon and Elliott (tied at 900 points).

Smith entered Saturday’s race with high hopes at his home track. The Cato, N.Y. native had a top 10 in five Cup Series starts at the road course, and was looking for his second top 10 in three races at Watkins Glen. However, after running inside of the top five for the majority of the race, the No. 7 Chevrolet wrecked on lap 65, causing him to finish 20th after receiving major damage to his car. After the race, Smith approached Dillon and had to be separated after the two grabbed each other. Smith vowed the No. 3 car would not win the championship after getting hit by him in turn 1.

Kyle Larson was expected to be a contender for the win at Watkins Glen. The 2013 Rookie of the Year finished 15th at the track last year, but had a car capable of finishing in the top five on Saturday. But his No. 42 car broke an axle in the early stages of the race, putting him out of contention almost immediately while running third.

Kenny Habul had been running in the top 10 throughout the day for Joe Gibbs Racing, yet bad luck struck him once again. The Australian finished 29th after getting tapped by Gaughan in turn 11, where Reed slammed into him extremely hard. Habul’s car had a fire, and he headed to pit road, safely exiting the car. However, he now is without a top 10 in 10 road-course events in the Xfinity Series.

Jeremy Clements arguably had one of the cleanest races for anyone in the field on Saturday afternoon. His self-owned No. 51 car finished 11th, marking his second-best finish of the year (10th at Dover). He gained 19 points on 10th in points Reed, who is now 55 markers ahead of Clements.

Making its NXS debut, Precision Performance Motorsports finished 13th at Watkins Glen with Brandon Gdovic behind the wheel. Using the assets of Viva Motorsports, he ran inside of the top 20 during the race, capitalizing on a few late-race cautions to work into the top 15. It is unknown at this time when his next race will be.

Eight drivers in the Zippo 200 are scheduled to race in the Cheez-It 355 on Sunday afternoon. Among those performing double duty are Larson, Keselowski, Logano, Landon Cassill, Buescher, Paul Menard, Said and JJ Yeley.

The fans certainly got what they asked for in the Xfinity Series for the second week in a row. Banging and bumping is what racing is all about, and you can’t say you didn’t see it on Saturday afternoon.

Following a wild race at Iowa that saw two disagreements, Smith and Dillon’s collision brought back some old memories of Bristol in Aug. 2014.

The rivalry was remade on Saturday, and now there is really something to watch for each week in the Xfinity Series. First, it was Buescher and Wallace. Then, it was Reed and Ross Chastain. Now, it is Smith and Dillon once again.

A scuffle is one thing, but this was not your average post-race confrontation. This was Smith at his angriest. It’s rare to see him angry, but when a championship is at stake, can you blame him? This is the battle that NASCAR needed to see, bringing back grassroots racing to a division that has received much criticism for doing every except that.

Now the championship is getting further and further away from Smith. Dillon was satisfied with a top five considering his seemingly wreck-less driving late in Saturday’s race. But as the two battle, especially with Smith vowing for more to come in the near future, it just gives Buescher, Elliott and even Sadler a glimmer of hope that the two will separate themselves from the competition by creating a distraction for their respective teams.

OK, this will ruffle some feathers. I know a Cup driver won, and another one finished second, but, it was Ford one-two-three, which was good. And Chris Buescher finally had a good finish, ahead of his Chevy-driving opponents.

A lot of people will say the mess between Regan Smith and assorted Childress Racing drivers was entertaining I guess. Drivers showing emotion! But, I’ll bet the heads of Chevrolet’s NASCAR program were none too pleased. I’ll bet after the race, they (Chevrolet Corporate) took all parties involved and sat them down and blasted them. After all, they got beat by Fords! That’s a major no-no!

Hope the race results today are the same as yesterday!

A new low for NA$CAR. Not only a Sprint Cup driver but a Sprint Cup Crew chief, and Sprint Cup pit crew. I especialy loved how Joey was able to overcome the hardchrging Morgan Sheppard.

The last week’s TV rating was .06. That is left the TV on while at work so the dog doesn’t get bored low. Funny, you won’t read that on Frontstretch. The series isn’t in trouble though. Not at all.