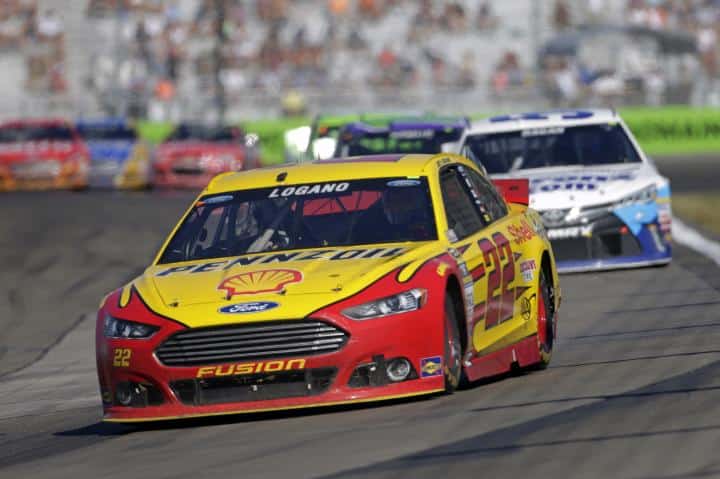 In reality, it was just a single corner.

Leader Kevin Harvick ran dry, causing a fuel mileage finish for the second straight week in the Cup Series and this time Logano was able to capitalize. The Team Penske driver, one week after losing on fuel mileage at Pocono pounced on this opportunity to earn his first Sprint Cup win on a road course. It was the first trip to Victory Lane for owner Roger Penske at the Glen, the Cheez-It 355 also marking a weekend sweep for Logano of both the Xfinity and Cup Series races there.

“I’m still just trying to catch my breath,” an exhausted Logano said in Victory Lane. “I thought [Harvick] was running out of gas out of the carousel there. You could tell his car was slowing down a little bit and then it really slowed down.”

For Harvick, the strategy was still well worth the gamble, as painful as coming up short may be. Attempting to run the final 39 laps without stopping, the No. 4 car had the most laps led (29) before the tank couldn’t run any longer. The 2006 race winner, who likely would have been stuck in traffic with other strategies still hung on to finish third.

“It sounds like, for sure, that we were two laps short,” Harvick said. “In the position that we’re in, we can obviously go for it. [But] when you get that close, it’s kind of a heartbreaker.”

Logano now becomes the first driver to sweep the NXS-Cup weekend at the Glen – breaking a four-race streak of runner-up finishes for Team Penske, too. It’s the first win for Penske’s No. 22 team since the Daytona 500 back in February.

“To see the checkered flag without a car in front of me for once felt really, really good,” Logano said. He came close to losing this one, too, overshooting turn 1 on the final lap and nearly spinning out in his bid to catch Harvick. Luckily, he was able to save the Shell/Pennzoil Ford and remain within striking distance as Harvick’s Chevrolet started to sputter.

Kyle Busch, perhaps the fastest car at the finish, slipped past the slowing Harvick to grab second across the line. Busch was closing on the leaders during the final stages but seemed to take a more conservative approach after running out of gas the week before.

“I thought we had one of the cars, if not the car, to beat,” Busch said. “We just never really got to the front in order to show it. Man, those cautions all in a row just killed us. That was our race today. Wasn’t meant to be – there was just too many things working against us.”

Still, Busch earned a strong reward for his efforts. With just 11 races behind him since his return from Daytona injuries, Busch has worked his way inside the top 30 in driver points – the last step toward being eligible to make the Chase.

“It was just a matter of time,” Busch said on reaching the top 30. “That was probably another reason we didn’t need to run out of gas and have an issue here today.”

It was hard for the aggressive driver to dial it back. Asked if he believed he could’ve caught Logano in the final laps without the fuel situation, Busch replied, “no doubt.”

The race, known for aggressive maneuvers only had a small handful of incidents. The first caution of the day flew on lap 26 after Greg Biffle had a flat tire. The No. 16 Ford later missed the inner loop as Biffle struggled to a 14th-place result.

The race then saw a truly odd moment when Denny Hamlin’s hood flew up and blocked the driver’s side of the racetrack.  Hamlin stayed on track before NASCAR posted him to repair the hood in pit lane; the resulting debris from the incident still drew another caution flag.

Then came a chain reaction crash, the race’s most awkward moment on a lap 50 restart. When Sam Hornish Jr. was slow to get going, a bottleneck behind him collected drivers like Kasey Kahne and Jamie McMurray – two winless drivers counting on points to make the Chase.

“I made it longer this week than last,” deadpanned Kahne, who had a scary pit-road crash early last week at Pocono. “I don’t know what my deal is but we got to get a little better.”

Kahne now finds himself the odd man out, over 50 points behind “bubble” driver Clint Bowyer to make the Chase. The cluster of drivers in front of him, though means any of the five winless drivers currently qualified for the postseason (McMurray, Jeff Gordon, Paul Menard, Ryan Newman and Bowyer) could be vulnerable if a driver outside the top 16 wins between now and Richmond.

The odds-on man to watch on Sunday was AJ Allmendinger. The defending race winner was also the event’s polesitter, leading the opening 20 laps. However, the No. 47 driver lost power under a lap 51 caution, resulting in a lap lost – which he eventually got back – and a disappointing 24th-place result.

“There is just nothing. No power,” Allmendinger said while his Chevrolet sat idle on the racetrack. “Can we have nothing break for once?”

Other pre-race favorites suffered through mechanical problems of their own. Gordon had an early brake line problem – resulting in a 41st-place result – and Tony Stewart stalled late in the race, finishing 43rd. Neither driver was really a factor at a course they’ve excelled at over the years.

The race – often ending in a rash of cautions – had an over 30-lap green-flag run to the end, setting up that intense fuel mileage fight to decide the winner for the second consecutive week. Harvick and Kenseth, who got the Pocono victory on fuel, once again took advantage of the turning tides, staying out for track position and running longer on fuel than anyone else. Kenseth, whose car led on the final restart and ultimately did make it to the end wound up fourth.

“It’s always nice to feel like you overachieved, I guess and we probably did that today,” said Kenseth. “I was by far the most competitive I’ve ever been here.”

Rounding out the top 10 was Kurt Busch in fifth, Bowyer sixth with Brad Keselowski, Carl Edwards, Hornish and Jimmie Johnson rounding out the top 10. Further back, Michael McDowell brought his Leavine Family Racing No. 95 to their first top 20 since Bristol last August, coming home 20th.