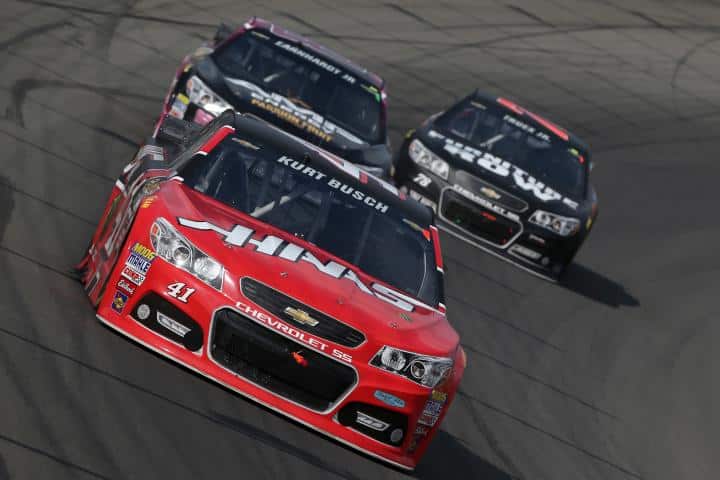 Conversations continued on Saturday with the now much more open-to-listening governing body on the much-discussed subject of aero packages. The net of the conversation was that the low-downforce aero package, tested at Kentucky Speedway a few weeks back, will be run again at Darlington Raceway with race-specific tires and then not again until 2016. This news, such as it is actually news, is really a confirmation on what was expected to be the case, but I was hoping that maybe, just maybe, the low-downforce package might have been reconsidered for the 2015 Chase races.

Sadly, though, this isn’t to be the case, and we’ll be back to the “basically impossible to pass the leader except on pit road” package we’ve suffered through at the mile-and-a-half circuits this season. For me, this is a missed opportunity, but on the other hand I also understand why the governing body is reluctant to make changes for the playoffs and add significantly more work to the already crowded plates of the NASCAR teams. Typically we see great racing at Darlington, so in some senses, it might not be the best test of the new package but it will certainly be interesting to watch how it unfolds. All that being said, though, it’s good news that NASCAR are considering some significant changes as what we’ve had to put up with this year hasn’t been that entertaining to watch.

TWO: All Quiet On the Title Sponsor Front

We’ve not heard so much as a peep on the subject of who will be replacing Sprint as title sponsor following the conclusion of the 2016 Cup season. Literally absolutely nothing (or at least that I’ve been able to find) has been mentioned on the topic of what is a crucial role in the sport as a whole. With lengthy TV deals in place and similarly long title sponsorship deals for the second and third series, all that is missing is the replacement for Sprint. Now it is of course still early – there are 16 months until what will be Sprint’s 13-year association with sport ends. But at the same time we haven’t heard anything about possible candidates nor even statements about a short list of interested parties or something like: negotiations are underway. In short, we’ve heard a big fat nothing. You can be sure that behind the scenes there is much going on, of that I have no doubt, but with a possible $1 billion 10-year ask for sponsorship on the table you aren’t going to have many companies lining up to bite. Precious few, in fact, will be able to come to the table with the finances and then activate on top of that at 36 race weekends. Watch this space, folks. This one might run for a while.

All 10 of Kenny Habul’s Xfinity Series starts, spread across the past four seasons, have come on the road courses. His average start is 24.6, with his average finish a fraction higher at 24.8, and he has not led any of the 600 laps he’s run. The Australian Habul is also the President and CEO of Sun Energy 1, a company that adorned fellow Joe Gibbs racer Denny Hamlin’s NXS car all the way to Victory Lane at Loudon this past July. This past Saturday at the Glen, Habul had run up front for much of the day, and was in eighth place when contact with Brendan Gaughan led to a spin, a hard follow-up hit from Ryan Reed and a car spewing flames (which you can view here.) It was certainly a tough end to what looked like a career best top-10 finish for the 42-year old Habul, but that wasn’t what caught my eye (or more accurately my ear). In the post-race interview with NBC Sports’s Dave Burns, Habul was asked if he was okay after the hard hit from Reed. And his response was priceless: “It’s all right, couple of scotches I’ll be fine.” To which Burns replied “spoken like a true gentlemen.” Yes, indeed Dave Burns. Yes indeed.

FOUR: Next Up – Michigan

Next up we head to Michigan International Speedway for the second of two races at the venue in 2015. This will be Cup race number 93 at the 2-mile D-shaped oval with the previous visit back in June being won by Kurt Busch. Michigan will also see the second usage of the higher drag/downforce package we first saw utilized with mixed results at Indianapolis Motor Speedway.

As I’ve said before, credit to NASCAR for listening to the feedback from drivers, teams (and let’s be fair – the fans) and attempting to change things up but from what we saw at the Brickyard, the bar is set pretty low. But should the package succeed this weekend, the plans are for it to be used next season at Pocono Raceway, Auto Club Speedway and again at Michigan. Clearly these new package tests are works in progress and it will take turn (and a bunch of data) to really find what sings, but NASCAR is to be applauded for listening and taking action. They could have stayed pat and gone with what we had but the openness and willingness to plough a new furrow is a harbinger of what’s to come.

And finally this week, a quick word on Busch, who has what Gene Haas describes as a “handshake deal” that will see Busch continue to pilot the No. 41 Chevy in 2016. Of course there are t’s to be crossed and i’s to be dotted, sponsors to be signed on, etc., over the next few weeks. But all being well, an official announcement will be forthcoming. I talked briefly about Habul above and his couple of scotches, and this feels like the same kind of “gentleman racer” sort of deal. A handshake agreement with a tacit understanding that it will get done on paper is proper old-school, and I have to say I really like it.

Why would any corporate entity spend the money necessary to sponsor NASCAR given the free fall decline in interest? It is just plain bad business. NASCAR got lucky with Comcast (voted the worst company in America in 2014) sponsoring the Xfinity series. If anyone at Comcast had done even a little homework they would have realized what a terrible investment it was. It is not exactly like NASCAR has been able to hide any of its myriad problems.

John Q, I agree with you 100% about the business aspect. That said, BZF seems to have the golden horseshoe of all time when it comes to draining money from corporations’ pockets. I will not be surprised to see someone come on board, just puzzled.

You wouldn’t happen to think that the driving force behind Nascar’s(i.e. the France Family) sudden openness to change could be due to this would you? Imagine it, that if they cant find somebody else to foot the bills, leaving them all the profits, than they might have to start going into their own pockets. The proverbial fox would be in the henhouse then wouldn’t it?

As a business owner would you make this investment if you could afford it? Why or why not? How difficult do you think attracting a sponsor will be?

The people that counsel me strongly advise against car sponsorship, not so much against a series. So if it made sense I would do it.
But the higher the price the fewer companies can afford it. Then it has to be a win/win situation. That may narrow it down even further. But somebody will.

These potential sponsors are Very educated & loaded with knowledgeable people who are quite often Stars at their positions.(present france family corp not included) They have & will again look at the cost vs benefits & decide that way. That being said one would think the Kentucky down force pkg would be a Great catalyst to the Racing action & create a Draw…But why give the fans what they want…Having the high drag pkg at Indy was dull & is just adding to the cost to the teams for something the fans are not asking for & the car looks even more ridiculous..brian seems to want odd looking cars that handle like indy cars(they won’t) instead of admitting how bad these cot decisions were…P.S he’s Not a Corporate Star ..Just lucky he works for family ..Kentucky package should be on everything except plate racing …These cars still have throttle & brake controls & “The Best Drivers in the World” or so we are told…Let them drive

Brian won’t give the fans what they want because it would be a detriment to Jimmie Johnson and he has to keep Mr. H happy and paying. He wants to enjoy the Monday morning phone calls.

It bothers me that this writer appears to be patting Nascar on the back for listening to teams, fans etc. Sorry, I’m not buying that they are listening. Fans and drivers have been complaining about the product for a long, long time and it has fallen on deaf ears. My guess is Brian France’s wallet is starting to get affected by the poor racing and as a result has finally decided to do something about it. It has nothing to do with listening to drivers or fans.

If NBC forked over what they did for the television rights, essentially getting on board a sinking ship, it would not surprise me at all if a company were stupid enough to pay the kind of dough Nascar is asking for to be the title sponsor. One could argue a company paying that much for title sponsorship is the reason Nascar is now racertainment instead of a sport.