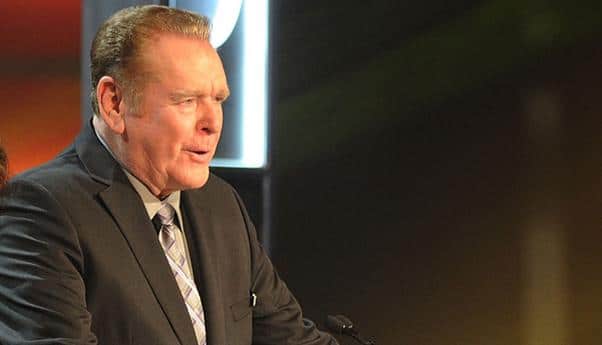 NASCAR’s “Gentle Giant” has died. Buddy Baker, 74, passed away early Monday morning after a brief battle with lung cancer. Baker’s death was announced through his former employer, SIRIUS XM Radio where tributes have been pouring in on Channel 90.

With overwhelming sadness, we regrettably announce the passing of our friend and colleague, Buddy Baker. #GentleGiant pic.twitter.com/v4jECDfPWq

Baker, at 6’6″ was one of NASCAR’s tallest drivers, and also one of its most successful. He captured 19 wins on the Cup Series circuit during a career that spanned parts of five decades, finishing a career-best fifth in the standings in 1977. His strength lay on the sport’s superspeedways; six of his victories came at the sport’s biggest tracks, Daytona and Talladega including the 1980 Daytona 500. His speed record for that race (177.602 mph) still stands after he won from the pole for owner Harry Ranier. Named one of the sport’s 50 Greatest Drivers in 1998, Baker also was successful at Charlotte, winning two straight World 600s in 1972-73 and the inaugural Sprint Unlimited (then known as the Busch Clash for series pole winners) in 1979.

After retiring from competition, Baker successfully transitioned into the television booth where he was a NASCAR commentator for The Nashville Network and CBS. Once the sport went national with its television contract in 2001 Baker eventually moved into radio; he hosted “The Late Shift” and “Tradin’ Paint” during a fruitful career with SIRIUS XM. The son of NASCAR Hall of Famer Buck Baker, Buddy also helped run a successful driving school for stock car enthusiasts.

“Many of today’s fans may know Buddy Baker as one of the greatest storytellers in the sport’s history, a unique skill that endeared him to millions,” said NASCAR Chairman and CEO Brian France. “But those who witnessed his racing talent recognized Buddy as a fast and fierce competitor, setting speed records and winning on NASCAR’s biggest stages. It is that dual role that made Buddy an absolute treasure who will be missed dearly.”

Baker was beloved within the NASCAR garage and tributes have poured in on social media from several drivers, crew chiefs, and personalities involved with the sport.

Been planning on doing a throw back at Darlington. Sure wish he could've seen it. #buddybaker pic.twitter.com/BaKOPcWtGq

Buddy Baker represented so much of the good in our sport. He was a man of the people who will be missed dearly.

RIP Buddy Baker. It was always a pleasure being a guest on his show, he was a wealth of knowledge and experience.

Baker, who resigned from his post at SIRIUS XM last month when he found out his cancer was inoperable handled the end of his life with both courage and grace. Hosting his final show for 40 minutes, he comforted an adoring fanbase while looking back on a wealth of NASCAR memories.

“Everything has a start and an ending,” he said that night. “Do not shed a tear. Give a smile when you say my name. I’m not saying goodbye. Just talk to you later.”

rest in peace buddy. i’ll always remember how gracious you were to me when i met you years ago at talladega.

A true NASCAR legend. Prayers to his family.

Baker was a master at telling stories and simply…telling stories. Not tying it into something he was selling, not trying to make us think he was greater than somebody else, or to promote a network’s agenda. He was the kind of character that most of NASCAR just doesn’t have today, on or off-track.

Good By my friend. You have brought a lot of sunshine into our lives. As the Angels and Saints prepare a place for you in Heaven, you go there standing tall. Your dedication to the world of NASCAR and the fans leave a legacy only you could obtain. We will miss your stories, your laughter and the honesty only a “gentle giant” could bring in to our homes. We love you and miss you already!