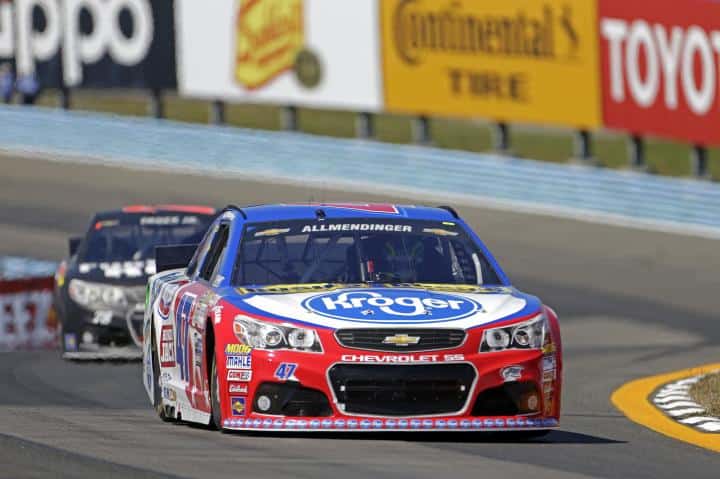 The unsung performer of the week was tough this time around. Kyle Busch played the strategy as well as he could and drove his wheels off for the rest of his second-place finish, but that was far from unexpected, and unexpected is what this section is about. It’s hard to praise Sam Hornish Jr. for his ninth-place run after he set off a massive chain reaction on a lap 50 restart, putting a couple of Chase hopefuls at the back of the field. The rest of the top 10 finished about where they should have… except maybe Jimmie Johnson, who crossed the line in 10th. The six-time champ is not very good at Watkins Glen in general and he had damage during the race as well as a spin late. For most of the day, Johnson looked like he’d be lucky to score a top 15, so a top 10 was a strong outcome for the driver, whose team has been behind the 8-ball lately. Johnson also lucked out on one other area this weekend: NASCAR said that they’ll likely run the 2015 rules on the intermediate tracks during the Chase, and Johnson has four wins with that configuration, while struggling with other packages NASCAR introduced at Kentucky and Indianapolis.

Road courses just aren’t like other tracks. They require a different strategy for pit stops and fuel mileage, and there can be any number of different approaches as some teams opted to try a two-stop strategy and others went with three (or more; Johnson made a total of six stops for repairs and still grabbed a top 10).

Fuel strategy bit a few teams who were expecting a late-race caution that never came, and you can’t blame them for expecting it as it’s been the norm in recent years. Mileage is beyond the drivers’ control after a certain point, though not beyond the teams’ control in general. Making your bed and having to lie in it is all part of the game, and the drivers did what they could with the hand they played. Fuel… it’s the other four-letter f-word.

AJ Allmendinger won the race a year ago and got off to a great start in defending it as he captured the pole and led the first 20 laps of the race. But then the No. 47 began to fade. A mechanical gremlin on lap 51 sapped the power from the No. 47, which rolled to a stop on track and had to be pushed to the pits. Allmendinger did get it refired, but lost a lap. He got the lap back on a subsequent caution, and was working his way back through the field, looking to at least end the day in the top 15, but his fuel tank ran dry seven laps shy of the finish, and the splash of gas that got him to the end cost him in the form of a 24th-place result.

Watkins Glen certainly wasn’t kind to several drivers hoping for a last-ditch Chase bid for those trying to get in the show on points. Greg Biffle and Aric Almirola rubbed on lap 11, and while there was no wreck, it caused a tire rub for Almirola. That resulted in a lengthy pit stop for the No. 43. Both drivers bounced back for a decent finish (Biffle came home 14th and Almirola 16th), it wasn’t enough to give either on much Chase momentum.

Kasey Kahne and Jamie McMurray both got into trouble on a lap 50 restart. When Hornish missed a shift, it started a big chain reaction, and Kahne and McMurray took the brunt of the damage. Both lost laps making repairs to crunched front ends, leaving McMurray in 40th and Kahne 42nd for the day.

Both Jeff Gordon and Tony Stewart have excellent records at Watkins Glen, but both are struggling this year. Gordon is in position to squeeze into the Chase on points, but Stewart’s only hope is to win. Stewart got off to a good start to the weekend despite news that he was being sued in a civil suit for the death of Kevin Ward Jr. last year. He qualified third and looked like he might finally be turning things around, but a broken seal sent Stewart off the track with drive train problems after just 56 laps, resulting in a last-place finish. Brake issues plagued Gordon and forced him to pit road for lengthy repairs. He finished, but it wasn’t pretty at four laps down in 41st. With four races left until Chase time, Gordon and McMurray are still inside the cutoff. Biffle, Almirola, Kahne and Stewart need to find some small miracles.

Two reasons: one, Kevin Harvick ran out of fuel in front of him, and two, Harvick wasn’t able to wreck him afterward, though he certainly appeared to try. When Harvick ran out of fuel coming to the checkers, he took a couple of swipes at Logano, apparently trying to spin the No. 22 in hopes of coasting to the checkers ahead of him, a pretty dirty move under the circumstances (and one that would not have worked in any case as Busch also beat Harvick to the line.

It’s not fair to say that Logano simply got lucky, though. Winning on fuel strategy has nothing to do with luck and everything to do with playing exactly the right cards at the right times throughout the race. A week ago, Logano was the driver leading the race when his tank ran dry; this week he was the driver who benefited from better strategy than the competition. It’s all part of the game, and an important part at that.

Casey Mears, Germain Racing: Mears is a good road-course racer, and this team is improving on a weekly basis now. Still, Sunday wasn’t without its pitfalls for Mears. A cut tire forced a pit stop under caution and while Mears recovered from that, the car fell off after the final restart of the day (he restarted 15th). For the first half of the day Mears easily had a top-15 car and couldn’t find the track position to go with it. Still, Mears earned his way into the top 20 in points and found himself at the top of the heap this week.

Justin Allgaier, HScott Motorsports: Allgaier earned his best starting spot of the year at the Glen and had a strong run despite some problems during the race including a lap 38 spin after contact with Johnson. Allgaier threatened retaliation, but said after the race he had spoken to Johnson and the two had agreed it wasn’t intentional. Allgaier was able to recover nicely and drive to a 19th-place finish, a much needed top 20 for his team.

Michael McDowell, Leavine Family Racing: Just this weekend, LFR said that the team would like to expand to full-time status in the Cup Series, and this weekend was certainly a boost toward that end. McDowell is an outstanding road-course driver, and he showed it all weekend long, methodically racing his way into the top 20 at the end of the day, a real shot in the arm for his program.